I’m feeling loads better and much more reenergised so today I plan on doing a hike to the waterfalls and up to some big famous temple….

I get one of the well known red taxi trucks known as songthaews to the zoo for 40baht then put my trust in Maps Me to lead the way…. 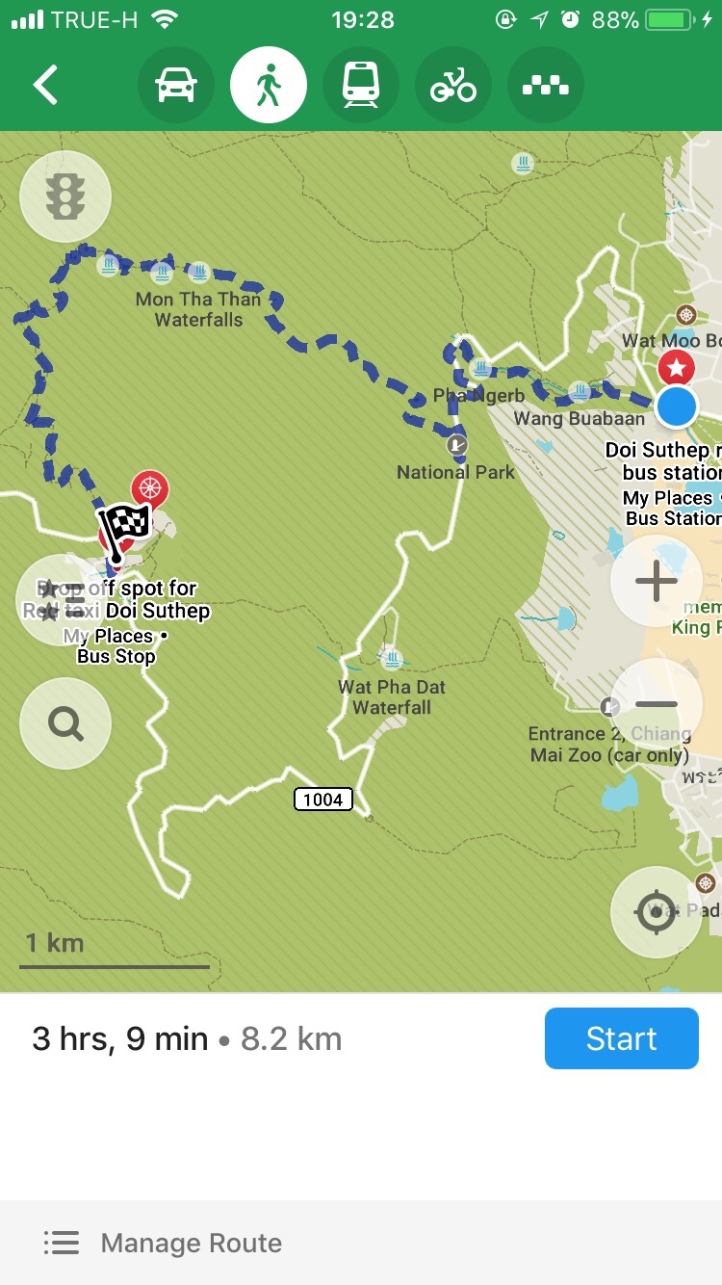 The first waterfall Wang Bua Baan is signposted and it’s only about 200m from where I started.

From here it’s back on the trail 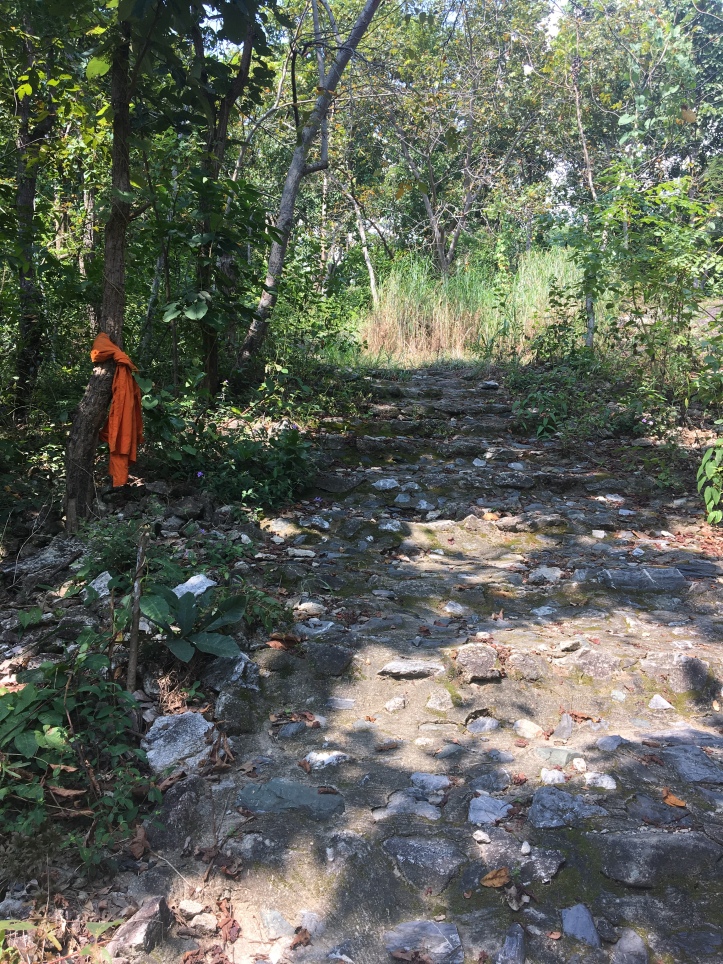 until I reach the second one Pha Ngerb which is much prettier. 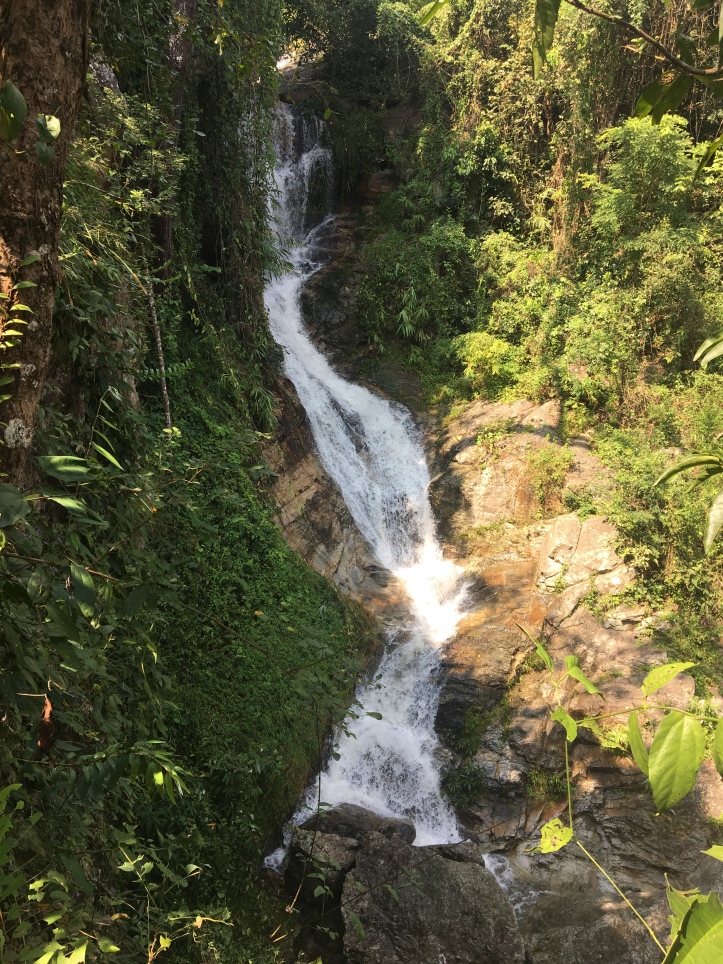 This hike is far more jungle like than the one I did in the jungle in Bolivia. Trees closing in all around, I’m walking into cobwebs and bugs n critters cradling n buzzing around everywhere! 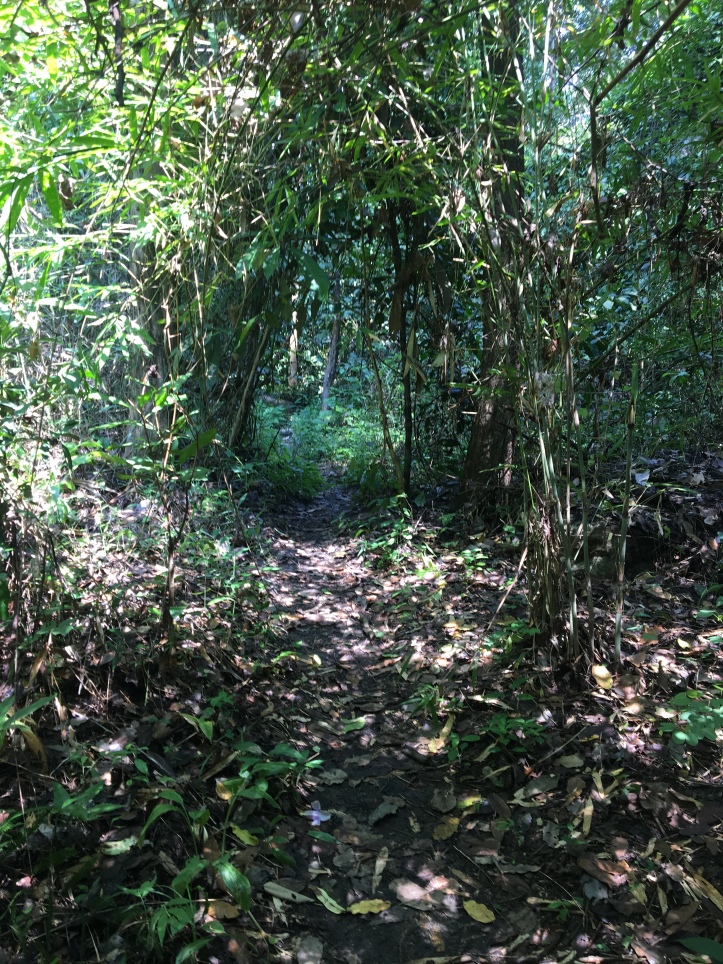 I’m not a huge fan of this I must admit but on I must go! At last I’m out of the jungle and on the main road and god it’s bloody hot. Who said Chiang Mai is much cooler than other parts of the country..it’s a blazing 33 degrees! From the road, there are signs into the national park and you take a right here. For foreigners on foot, it’s 100baht to enter. I’m told to go to the first waterfall then come back. I try to explain I don’t want to come back, I want to do the path to Doi Suthep via the other waterfalls. I’m told, ‘no you come back’. Thinking she’s misunderstood me I explain again. I’m told ‘u no come back you no ticket’. I’m failing to understand why this is until the ticket lady continues ‘no more waterfalls, slippy, people die!’ Ahhhh no it makes sense but it means I don’t get to see everything and I have to walk 2kms up the Mon Tha Than waterfall and 2 back!

Its a decent enough walk, soaking up the rays but one thing that bothers me is this constant high pitched screeching sound. I don’t know if it’s some animals lurking in the trees or something to do with the overhead electricity cables. It’s enough to give u a headache thou!

As you near the waterfall, there is a visitor centre and campsite and it does look a chilled place to stay. I make my way to the waterfall and it’s beautiful, 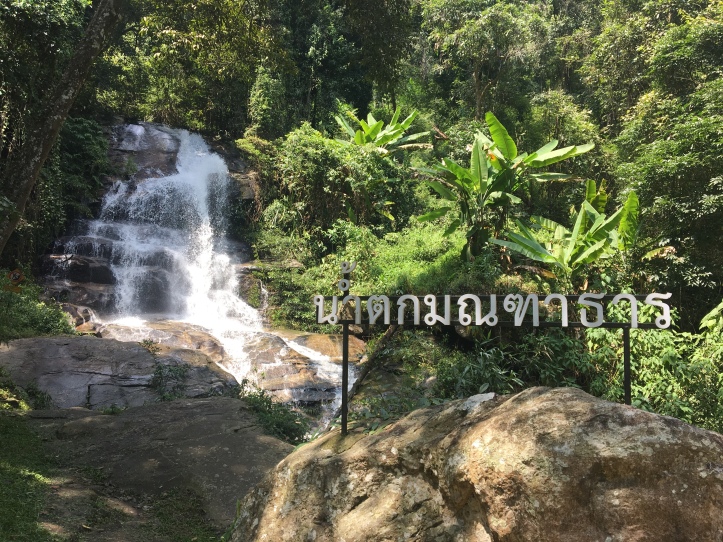 also very peaceful and tranquil. There’s nobody here but me and 2 other girls who then leave so I just sit on a rock and take in my surroundings. 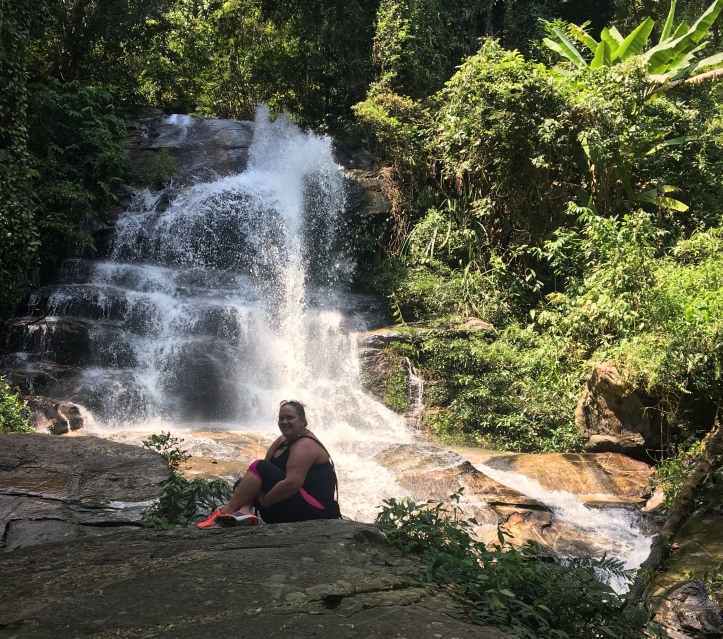 I still have a fair few miles to go do best get in with it and walk back. By being redirected this way, it means I now get to see the beautiful Wat Pha Lat temple and waterfall I wdnt have seen on the other route. This place is a hidden treasure with so many little gems. 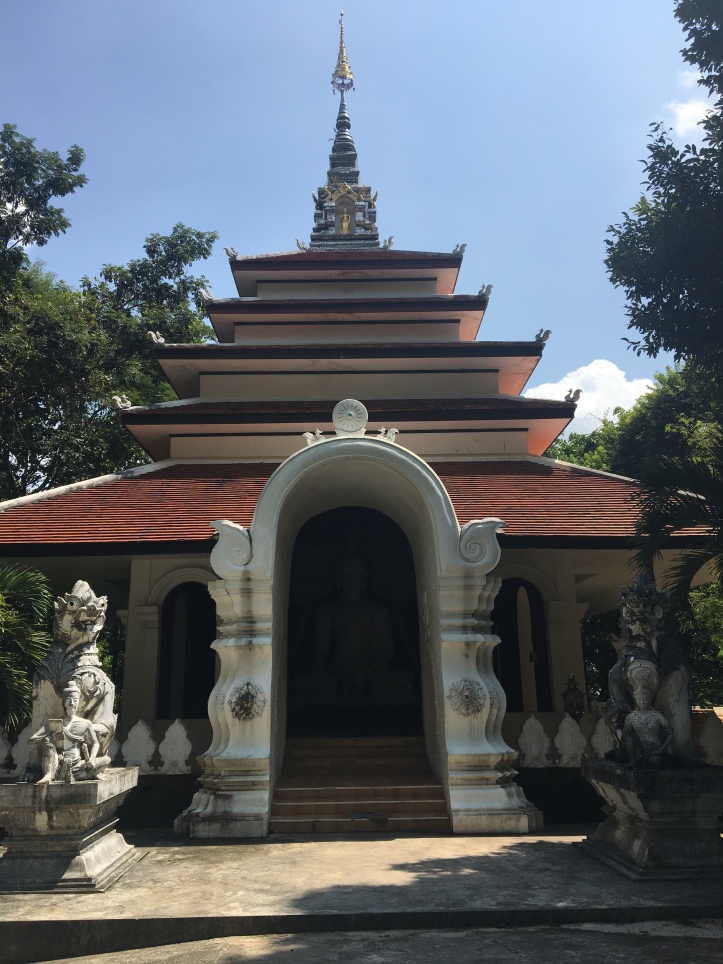 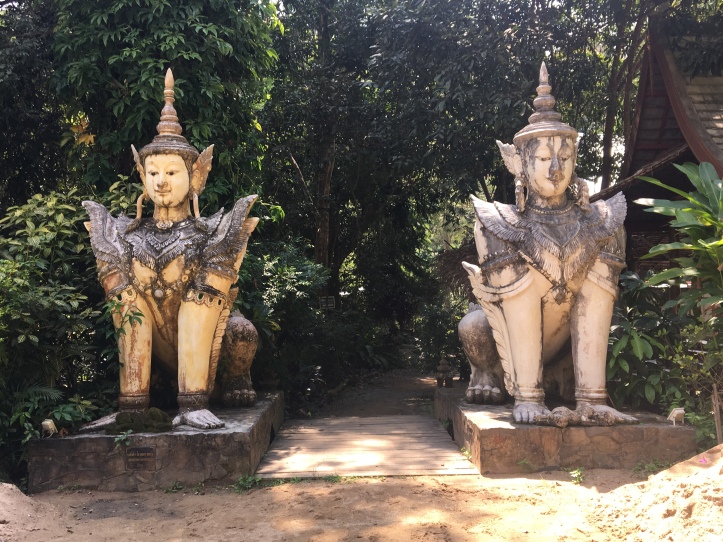 It’s so pretty and tranquil it’s no wonder it’s big for meditation. The temples to gardens to the waterfall, it’s a beautiful little place. 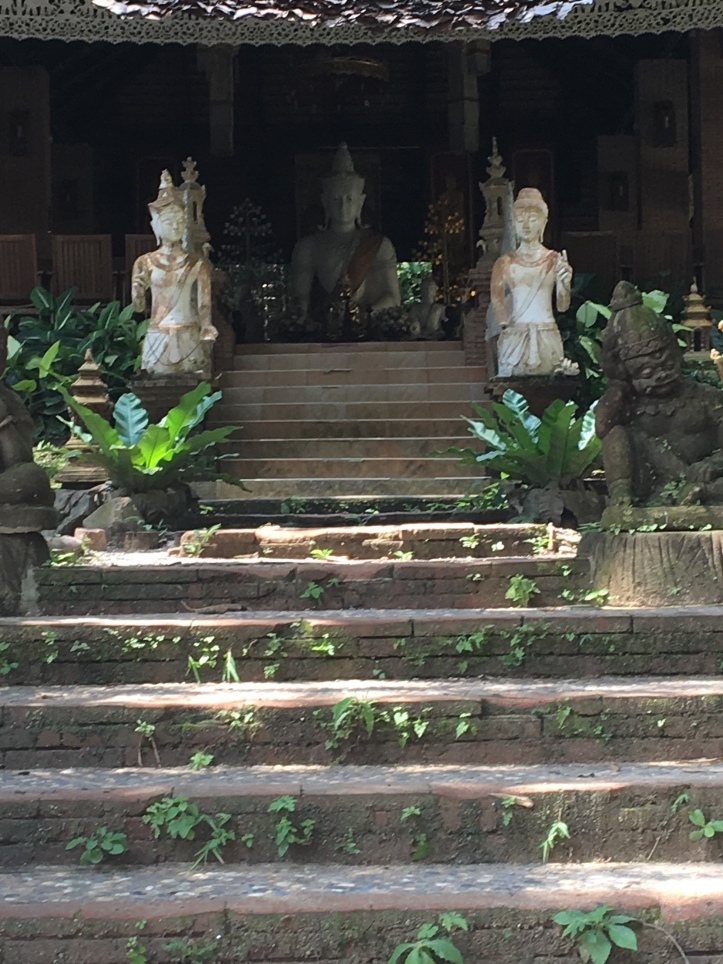 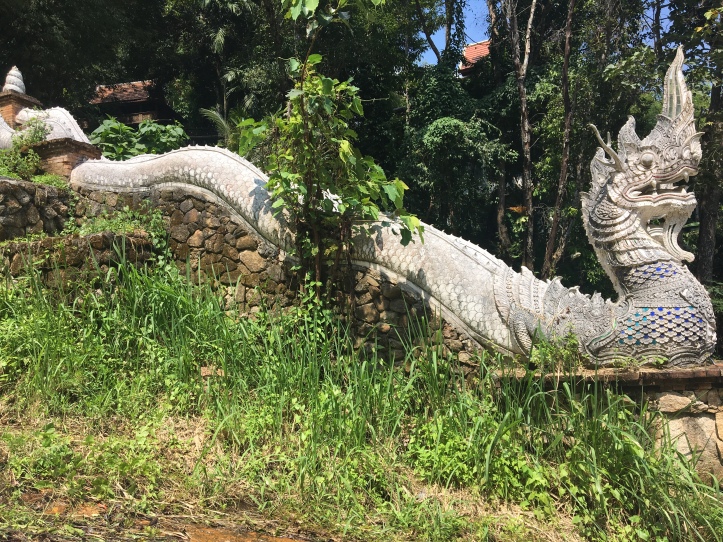 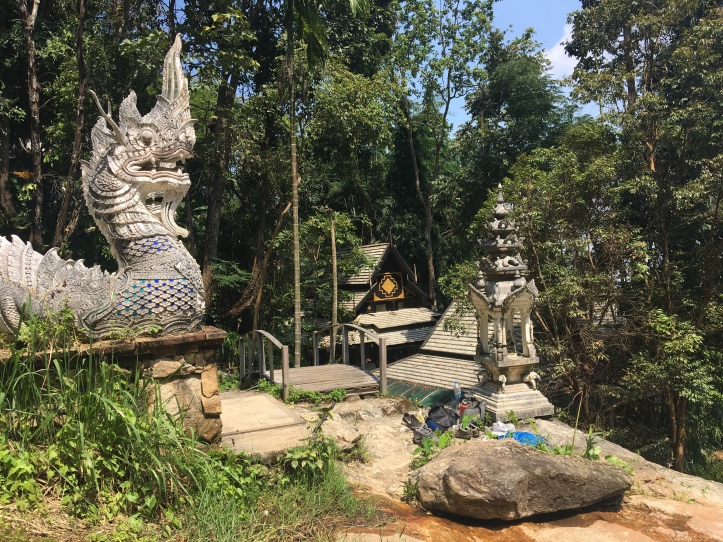 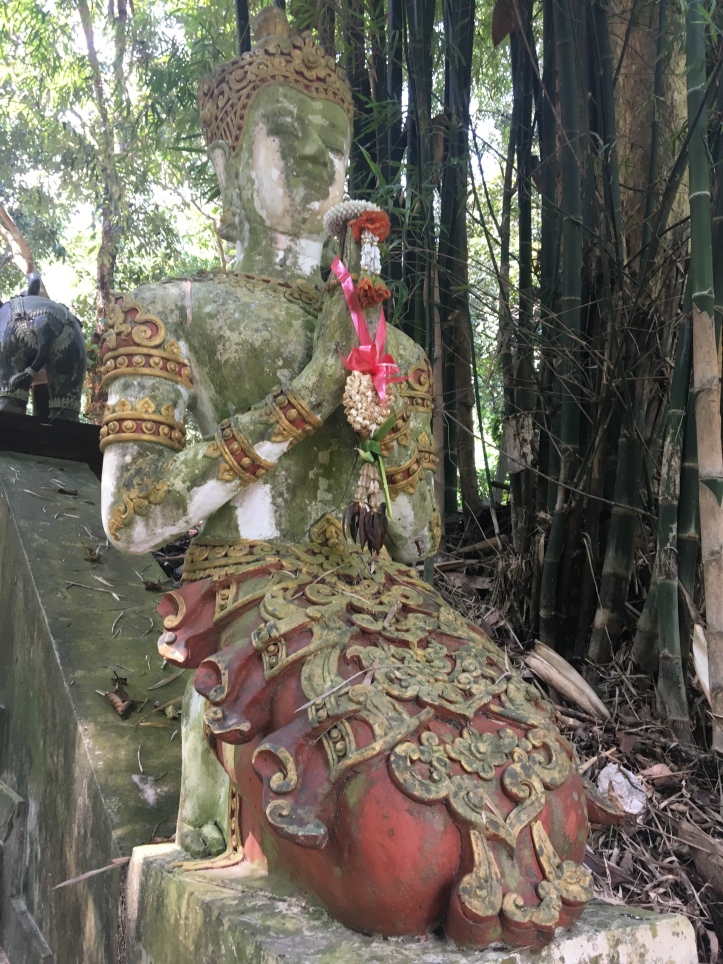 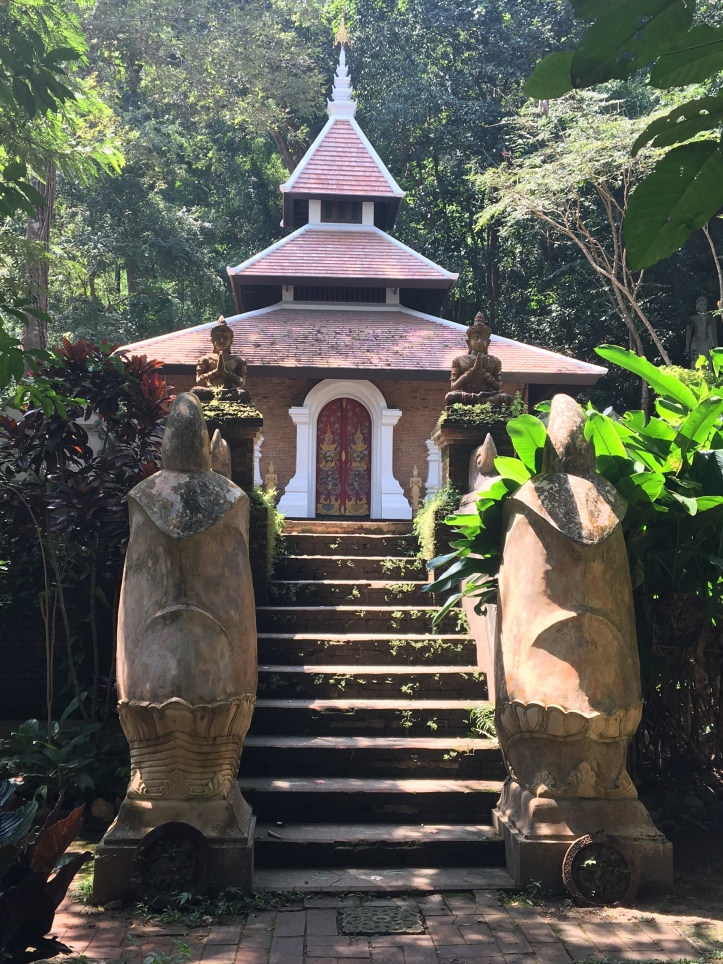 I clamber up another trail, going slightly off piste 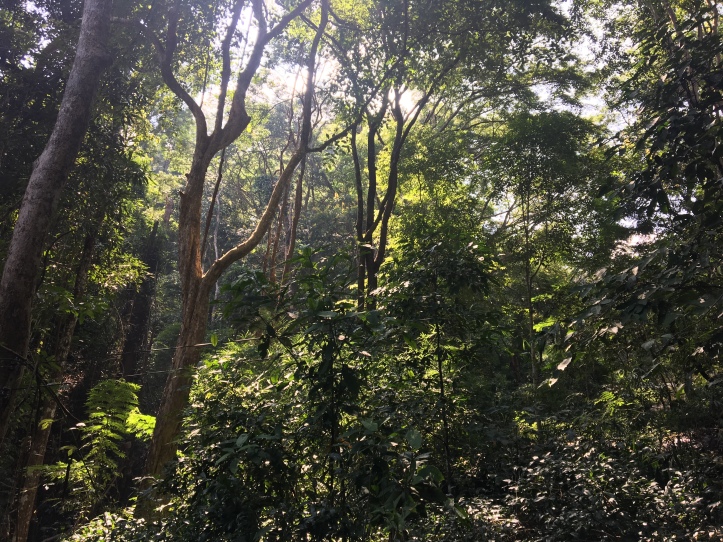 until I finally get back on the road to seek out another trail. The trail is called the Pilgrims Path and there are a few Buddhist Monks on my tail. I start on this track but having left my hiking boots at home, it’s just far too steep, muddy and slippery for me. I’ve also had my fill of the wilderness for one day, I keep itching thinking I’m covered in creepy crawlies! I get back to the main road and flag down a red truck taxi to take me the rest of the way.

You can tell straight away this is a big tourist attraction. The side of the road and entrance are full with food vendors etc. A quick snack to keep myself going and it’s time to see what this Wat Phrathat Doi Suthep Temple is all about. To enter you pass 2 dragons that are guarding a huge set of steps. 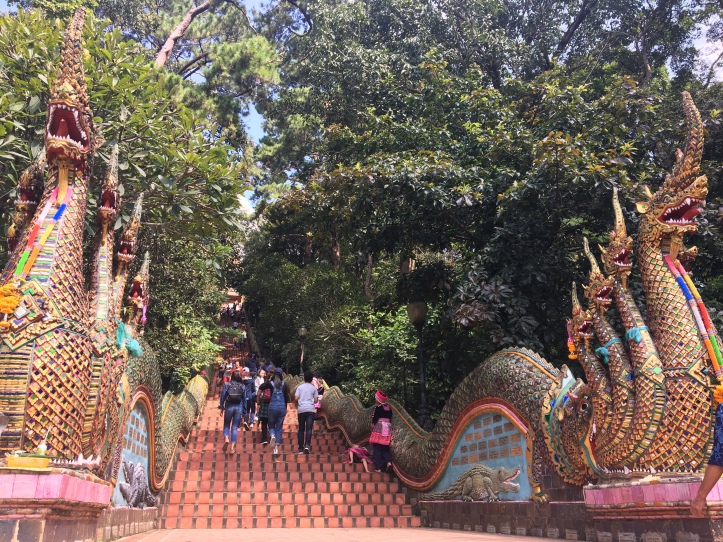 Get ready legs! I’ve read that there are 306-steps flanked by naga (serpents). The climb was intended to help devotees accrue Buddhist merit. Apparently there’s a funicular too but I didn’t see this.

The original founding of the temple remains a legend and there are a few varied versions. The temple is said to have been founded in 1383 when the first stupa was built. Over time, the temple has expanded, and been made to look more extravagant with many more holy shrines added. A road to the temple was first built in 1935…before this, it used to take over 5 hours to get there.

The monastery was established in 1383 by King Keu Naone to enshrine a piece of bone said to be from the shoulder of the historical Buddha. The bone shard was brought to Lanna by a wandering monk from Sukhothai and it broke into two pieces at the base of the mountain, with one piece being enshrined at Wat Suan Dok. The second fragment was mounted onto a sacred white elephant that wandered the jungle until it died, in the process selecting the spot where the monastery was later founded. 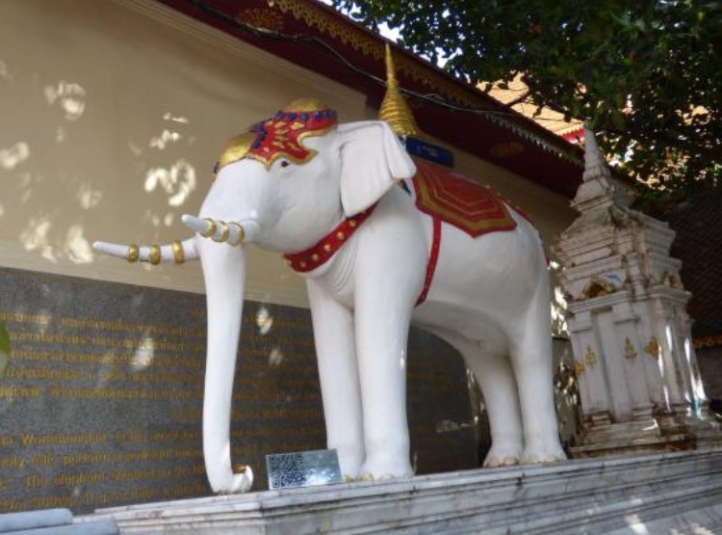 This is one of the most stunning temples I’ve ever seen. I walk around the lower level and I’m surrounded by dazzling bejewelled buildings, Buddhist ornaments and blooming gardens and flier displays. There’s also a mix of Hinduism too as there are a few Ganesha’s. 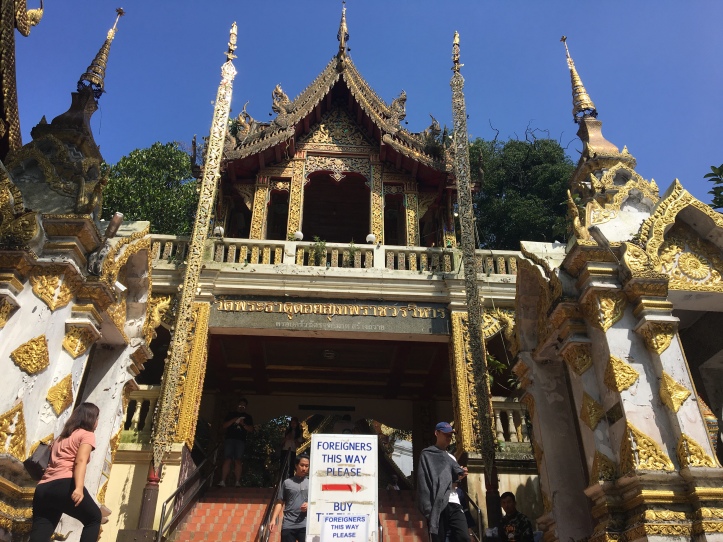 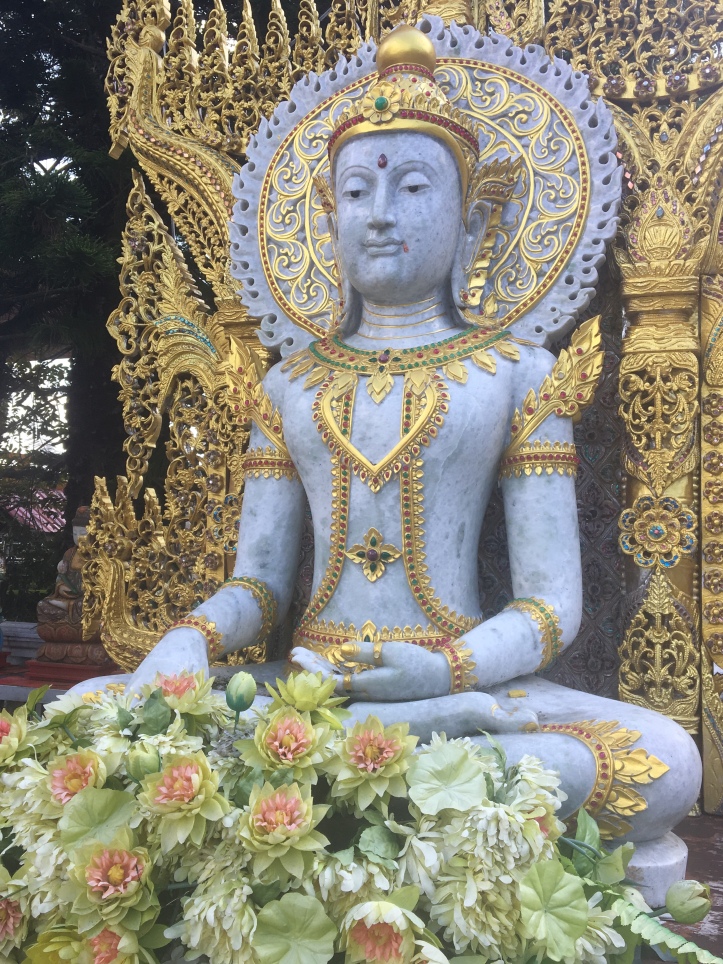 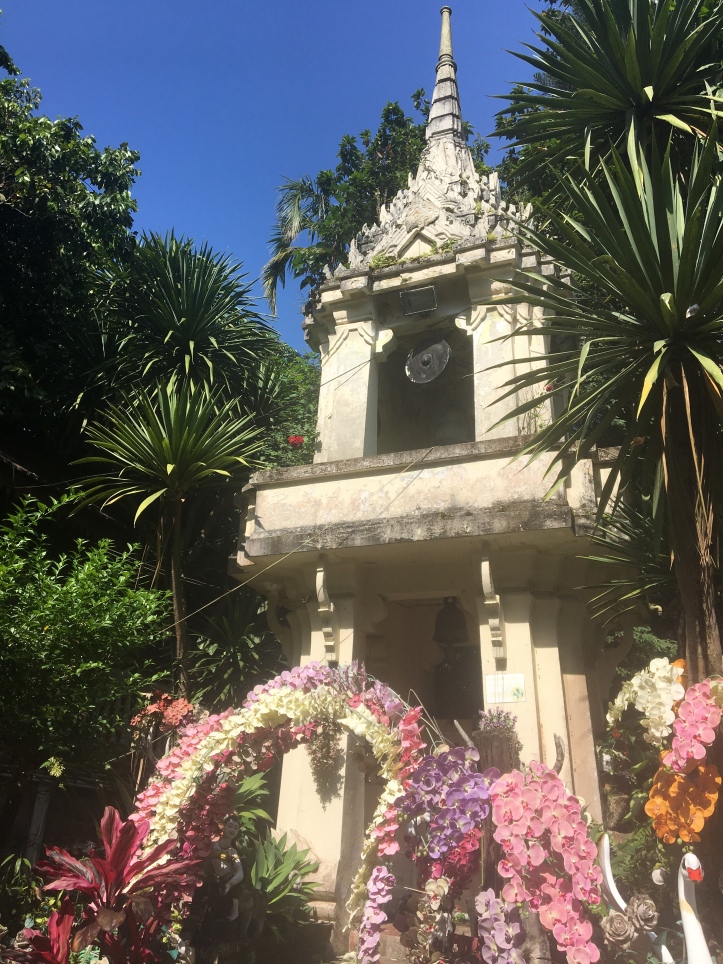 From here there are great views down over the city of Chiang Mai. Having completed the circuit around the temple, removing my shoes, I enter and am utterly amazed by what I see. It’s like the temple of gold….blindingly so in today’s black big sunshine. 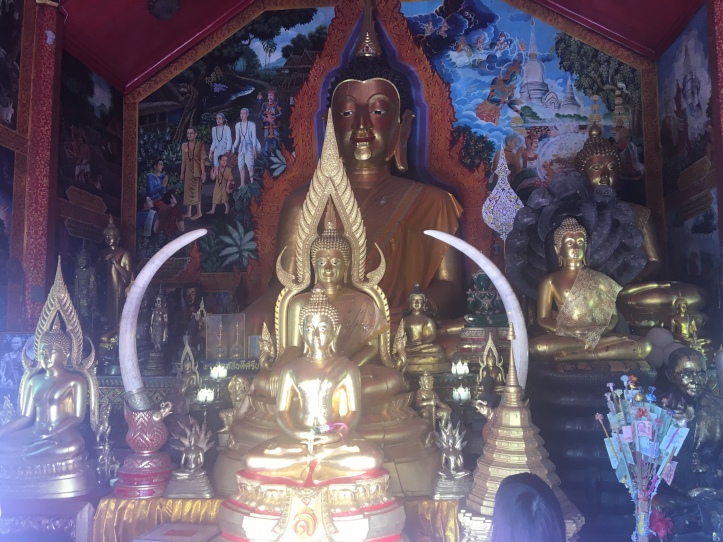 As I walk around I can’t get over how exuberant the place is. It’s an incredible place and a must for any visitor to Chiang Mai…my advice would be to get there a bit earlier thou as it gets completely rammed with tourists. 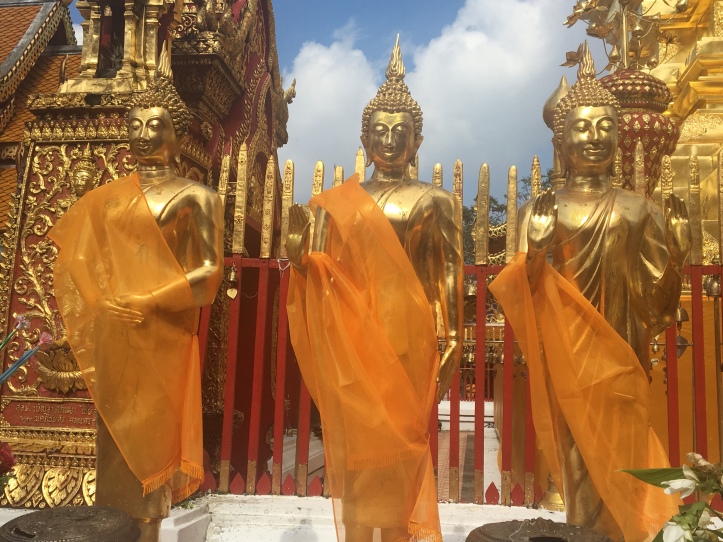 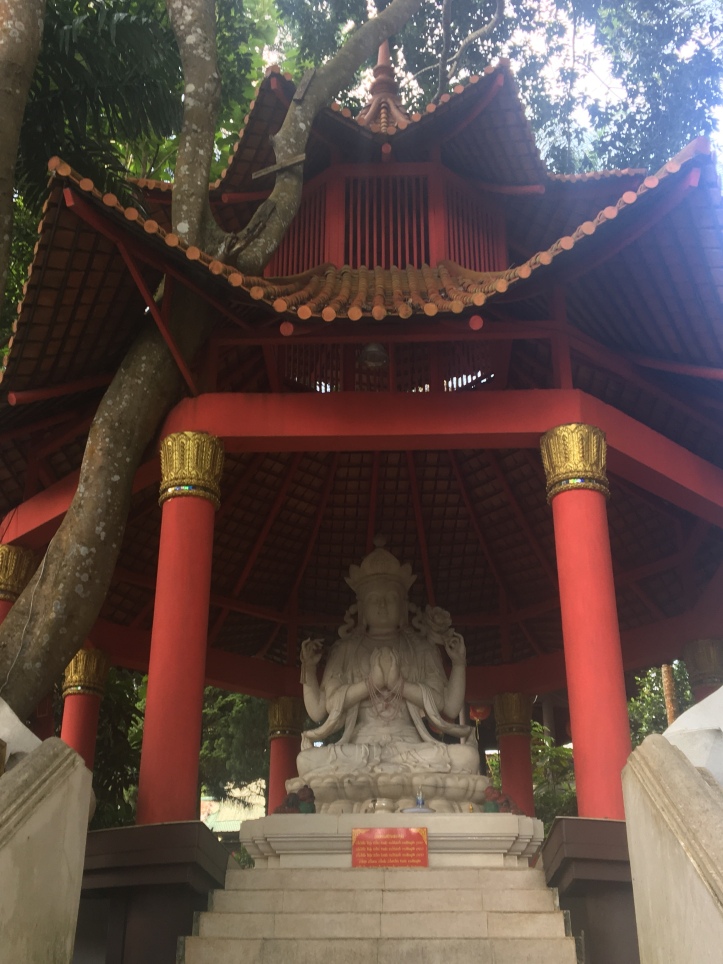 Time to get back to town and there are a string of songthaew’s lined up outside so there’s no problem getting back. It costs 60baht. I accidentally end up at the Maya shopping mall and go off shopping followed by a famous northern Thai fish I’ve bed. Looking forward to trying – Khao Soi, a yellow curry chicken noodle dish and it was gorgeous and a bargain at less than £2!

I wander back to my guesthouse through Nimman and that’s me pretty much done for the day!