Sat morning and it’s an early pick up for the 2 hour drive to Chiang Khong – the Thai border. This is all relatively straight forward and having booked the tour element of it, we’re given all the necessary paperwork in advance and we have a bus waiting to take us over the Friendship Bridge, through no mans land to the Laos border. Here u get a visa on arrival (voa) but the price depends on where ur from. For the UK I was sure it was 35$ but they only gave me 4$ change!

Once everyone is through (bit of advice, fill the forms in quickly to get ur visa processed or ull end up queuing for ages),

then there’s a truck waiting to transport us to Huay Xai and the Mekong River. We make an obligatory stop at a little place beforehand to stock up on supplies first which are vastly overpriced. If u can, get ur supplies in Thailand first else beers here will set u back a fair bit!

Then it’s finally to the boat.

A bustling little place with loads of boats moored up on the murky brown water. Some are being loaded with people, other with produce – even of the live kind!

I’m not quite sure how it works but those with a tour seem to board first and then it looks as though those doing it themselves are allowed on. When u think there’s no more room, another 30 or so squeeze in. Tickets are given out with seats numbers on but these are greatly ignored and definitely more get on than there are number of seats. More advice – keep hold of this ticket – u need it the next day! The boat is made up of old car and bus seats and to be honest, are really not that comfortable. It’s going to be a long 6 hours!

The scenery is beautiful as we sail down the Mekong, the 12th longest river in the world and the 7th in Asia spanning a length of 4350km from China through to Vietnam and Cambodia. As we start sailing, on one side there is Thailand and Laos on the other. We make a few stops to let some local people on and off along the way.

I had been told by Lee who I met in Ecuador that this was a great way to meet people and it sure is. Rob from my tour in Chiang Raí is here and we get talking to Jess from the States and Bram from the Netherlands. There’s also a huge group of teachers from the States who are a right laugh and will forever be known as the pyjama party! I even meet a lovely lad Rhys from Ebbw Vale….who wda thought that hey! Small world!

We don’t spend the night on the boat as I first thought – thank god but in Pak Beng, a small town on the river geared up for these boats stopping. 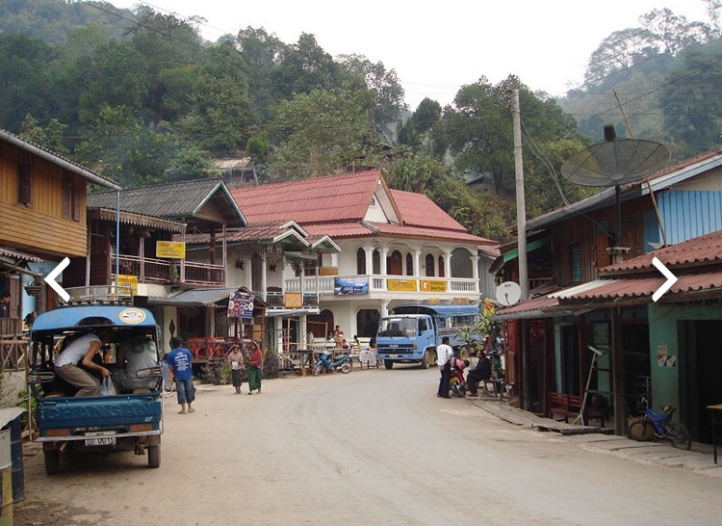 As you get off it’s crazy – kids begging for the snacks they can see in your bags and restaurant and accommodation touts galore. U barely have chance to get ur shoes on and collect ur bags before little hands are coming after ur bag of crisps! I booked a room beforehand for myself and Rob and there’s a person there with my name. Easy peasy and it’s up the hill to our hotel. Nothing here is spectacular and ull likely be sharing ur room with a few creepy crawlies but it’s only for a night. It’ll be easy to buddy up with someone on the boat too to split the cost of a room. They seem to be about £10 a night and up.

After a welcome shower, we head out for some dinner and drinks. Hive Bar sounded promising but was fairly quiet so we wander to find Happy Bar and this is where it’s at. A lot of the boat people are in here and a lot more were earlier. Pool table, tunes and beer. We end up having a much later night than planned but not as bad as it cd have been as they do kick us out to shut up shop!

It feels like another early start…everyone is getting up slightly earlier than we really need to but due to the lack of seats on the boat yesterday, people want to ensure they get one! Definitely aim to be there 30 mins or more before departure time.

There’s no shortage of breakfast options here and many sell sandwiches to take on board and a myriad of snack stalls too. Again, slightly inflated prices but what can u do. There are snacks and drinks on board too so not essential but again, pricier.

We’re on a different boat this morning and it’s much nicer and comfier than yesterday’s. As I said earlier, keep ur ticket as today is when ull need it. I had to pay an extra £10 as I’d left it on the previous boat!The set up for talking to people is also much better and I meet a bunch of lads from Bristol, including one who lives on the same street as I did last year!

After a leisurely quiet couple of hours, talking and chilling,

once most of us have eaten lunch, it’s beer o clock!

The cards come out and listen to some tunes – including an interesting one by dear friends Texas – ‘sitting on a chicken’ or something like that! Good old country music!!!

The boat is full of some cool people and it’s a great laugh. Everyone sharing stories and snacks, drinking and singing away. I had been told that today was 9 hours. Luckily it wasn’t but I was having so much fun that when we do arrive, I’m not wanting to get off just yet!

The boat stop is a fair way out of Luang Prabang – a good 30-40 mins in a taxi. You can’t just jump in one but have to queue buy a ticket first. Then we all cram in and head to our hostel