So I’m off on a jolly little holiday to Phuket. I notice straight away with my internal flight from Bangkok to Phuket that’s it’s full of Russians and my bus from the airport into Karin is also the same. It suddenly dawns on me why my friend d Dave said he moved to the south of the island.

The bus takes much longer than the advertised times so bear that in mind – especially if ur using it as an inter resort mode of transport. They also babble something about u needing a smart card but y can pay cash. It cost 170b.

Walking to my hotel I wonder where the fuck I’ve come too. After being in so many cultural and beautiful places over the past 10 months, this is like Blackpool (maybe Moscow) in the sun! After checking in, I go to a great little restaurant opposite suggested by Dave called the Elephant Cafe which does great food at cheap prices. From here, I go to seek out a place owned by a British guy where I think I might change accommodation too. Turns out, the owner Paul of Oasis Guesthouse and bar is only from bloody Newport! Taffs everywhere mun! It would be rude to not have a few bevvies here.

Monday I go straight to the beach. 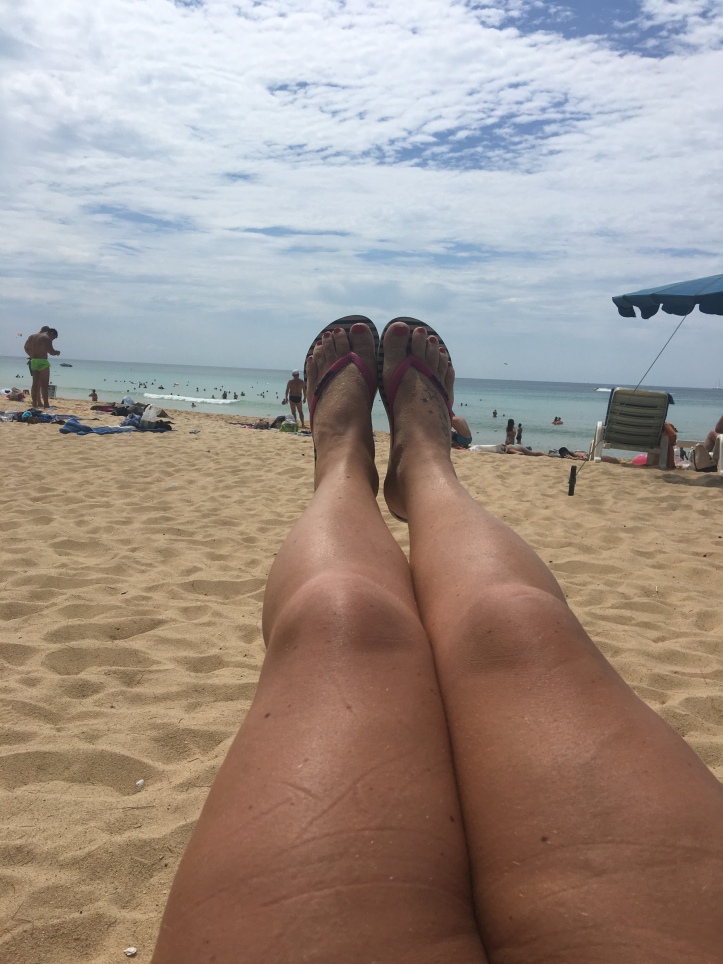 This is why I’ve come here after all. I cook for a good few hours before leaving to get ready. Tonight I’m meeting my ex colleague Dave who retired here 2 years ago and I’m dead excited to be catching up with him.

We go for a few beers, and dinner at his mate Craig’s place – The Living Room. 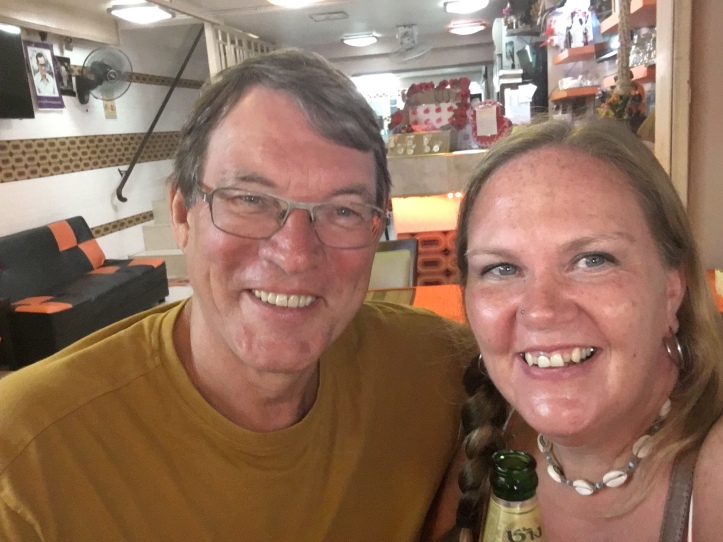 They have a fantastic menu of both British and Thai food and really deliver. We go to a few more places, ending the night in the well known Sutin’s bar. The owner, Sutin is somewhat of a legend here in Karon. It’s a great night catching up with Dave and I’ve no idea what time I get home but it’s a late one!

Tuesday I’m paying the price of such a good night and after a proper (proper) English breakfast at Craig’s I do very little else!

I spend more time at the beach

And learn how Russians sun bathe. This guy was stood in different positions for over 2 hours!!!

I also change hotel to Paul’s as it’s much nearer the beach and has more going on to meet people.

Despite the craziness of the drivers here, I hire a scooter to get me out and about to visit people. Today I’m meeting Dave at the very posh Boathouse restaurant. It’s a great venue overlooking a gorgeous part of Kata Beach.

Unbeknown to us, on a Friday they do a set menu with unlimited wine for only 1000b. Bugger – we didn’t know this and we both have our bikes. The food and service along with company was lovely and it was great to have a treat day out too. Back in Karon, there’s a lovely couple from London way – Katie and Shaun at Oasis so that e d up being another late one! Fun thou – especially teasing the only friendly Russian in town. Fun until he got the vodka shots out anyway!

Saturday, I’m meeting Dave for a bit of sightseeing despite being slightly hungover (again)! I’m sure I came here to rest but it’s full on holiday mode! It’s not a bad run out on the moped to Dave’s house but then it’s on the back of his to visit some sights. 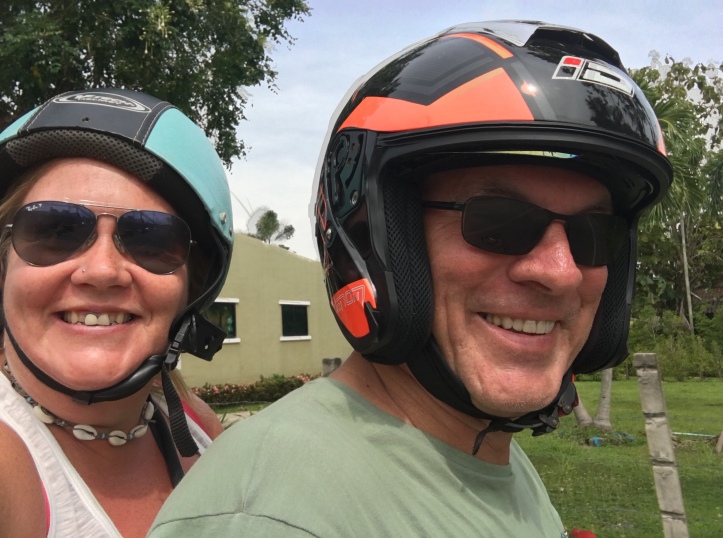 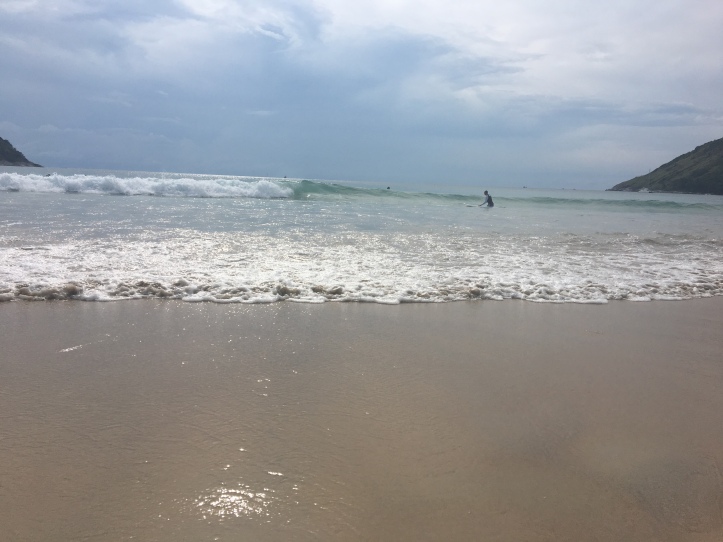 then it’s up to Phromthep Cape, the most southern tip of the island with some amazing views. 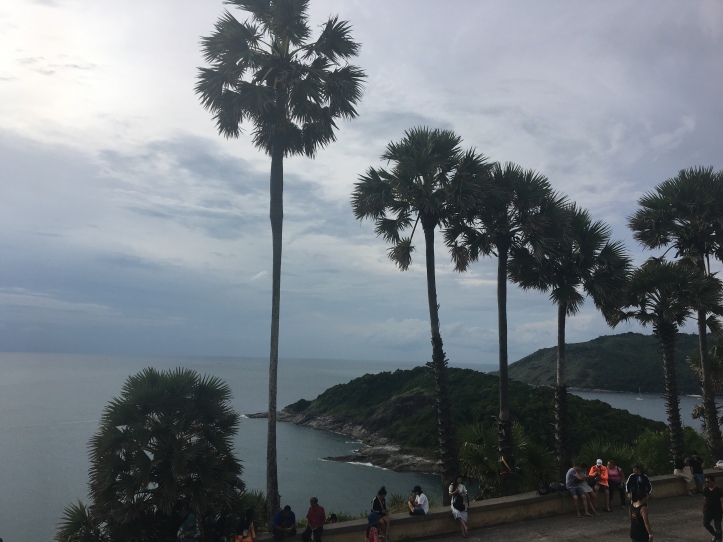 The ride back is a bit more hairy as there are some massive steep hills that we’re now going up but we make it back without me falling off the edge!

Tonight we’re going out in Rawai and after a lovely dinner and a treat of some wine, Dave takes me to the famous Sunshine bar. It’s the only bar on this stretch that is busy. Once inside, it’s obvious why! Behind the bar is full of lady boys and overly friendly gay guys all wearing some head dress or other dancing to cheesy music and climbing a stripper pole.

The place is absolutely bonkers and I love it. People sit around the bar in a U shape watching and being a part of all the action. I get chatting to a lovely girl next to me called Jaimee from Ireland and her boyfriend Grant is only from down the road – again from Newport. It’s a crazy small world. 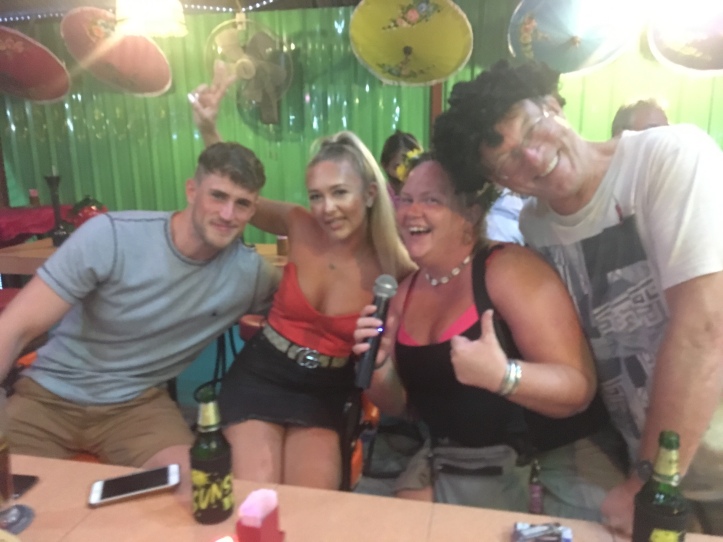 The 4 of us along with Sami and the rest of the sunshine staff have an absolute hoot. This place is awesome. Regulation on closing time is quite strict thou and they’re having to close up shop. So Sami takes us all to Laguna for a nightcap before we call it a night and get a taxi back. Dave takes me to a cracker of a place on Sunday – Islander Bar for a roast dinner. Ok, it’s not my mum’s but it was bloody good and just the ticket! 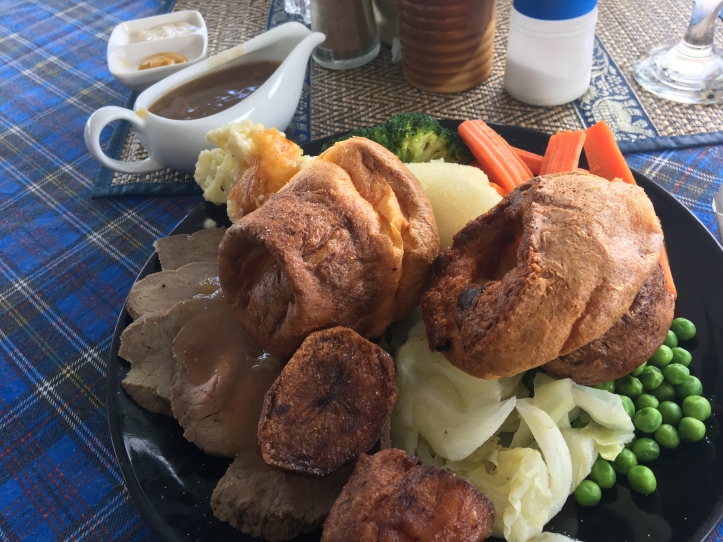 Monday was meant to be a quiet one after a day at the beach but having dinner at Craig’s (why eat anywhere else when Pim’s cooking is so good), I get invited along to a local persons bday party – well, it wd be rude not too hey

and cue, another night at Sutin’s! It’s a great laugh and Pim is one of the funniest people I’ve met. Her grasp on the English language is awesome!

Despite the hangover, I’ve been looking forward to today as I’m heading into Chalong to see one of my oldest school friends. Ernie and 6 others from back home are here to go to the Tiger Muay Thai and MMA Camp. It’s great seeing a friend from back home here and weird that it’s Ernie and not anyone else that said they may join me at some point or another on my trip. I had a great day 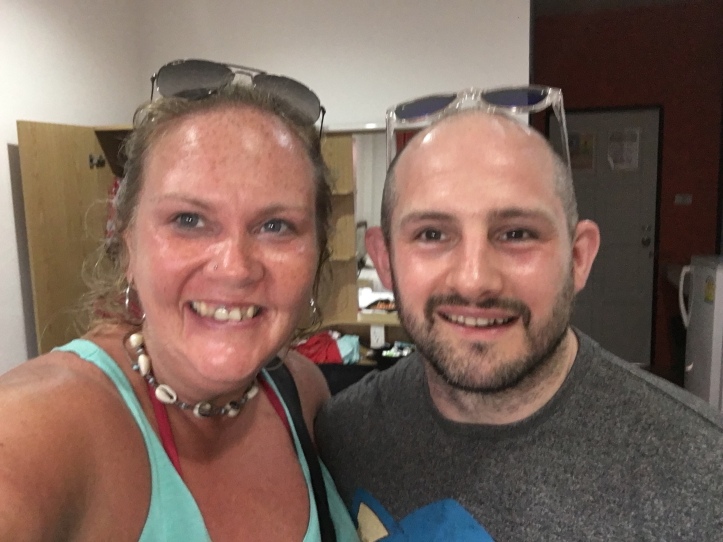 and was lush meeting the rest of the crazy group he’s with! I end up driving back in rush hour and it’s absolutely bonkers mental crazy! I’ve got cars up my ass n bikes coming from every angle. The roundabout the map said isn’t there and I end up going past some heavy roadworks that I definitely didn’t pass on the way in. Oh god, where the fuck am I?!?! Quick stop and recheck the map and I need to do a U turn in the batshit crazy traffic. Never knew u cd get a sweat on driving a moped! Finally I find the turning I need and despite the journey seeming to take forever, I get home in one piece! Dinner at Craig’s with some friends I’ve made in there and it’s an early night!

Wednesday and I’ve booked Dave and I on to a tour. Today we’re off to James Bond Island amongst some other places. We opt for the most expensive tour as the guy told me there are less Russians as they won’t pay the price! At Phuket Royal Marina we’re treated to drinks, toast and an assortment of other nibbles. Not a bad start really. After a long wait and safety briefings, sales pitches we board our boat which is quite nice. Dave sits inside but being a sun worshipping goddess, I head straight outside to top up the tan. Our first stop is a canoe ride around some of the limestone rocks 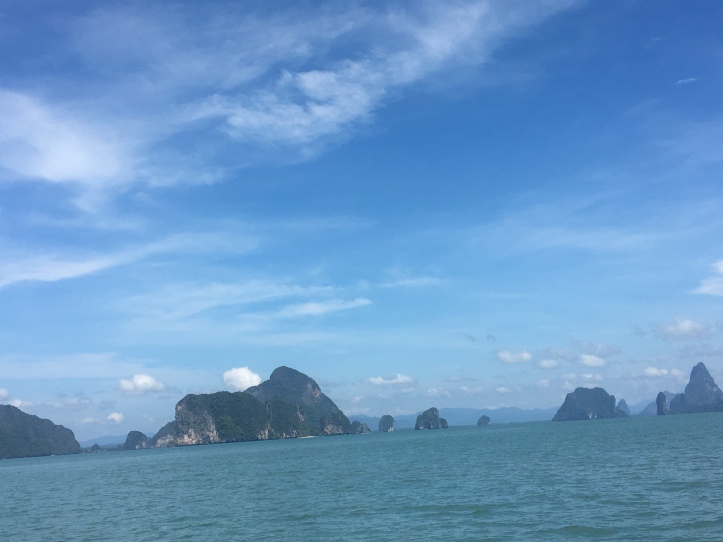 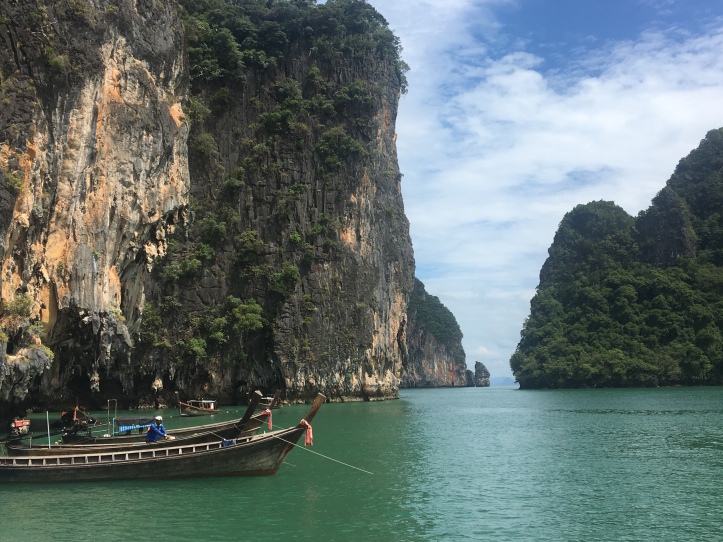 and through the Tham Lot cave. It’s great as we have someone rowing for us in this so we can just sit back and enjoy the ride. Our dude is funny thou and every time he wants to point something out addresses us Mr Dave and Miss Shelle. Floating through the open water I hear someone call my name. Who the bell knows me here…it’s only Jaimee and Grant who we met the other night! How bizarre!

From here it’s on to James Bond Island…famous for its filming of The Man with the Golden Gun although having not seen it, I know not where this features in the film. It is hugely touristic and I think they let dar too many people on. Queuing to get photos etc is just annoying but we get a few. 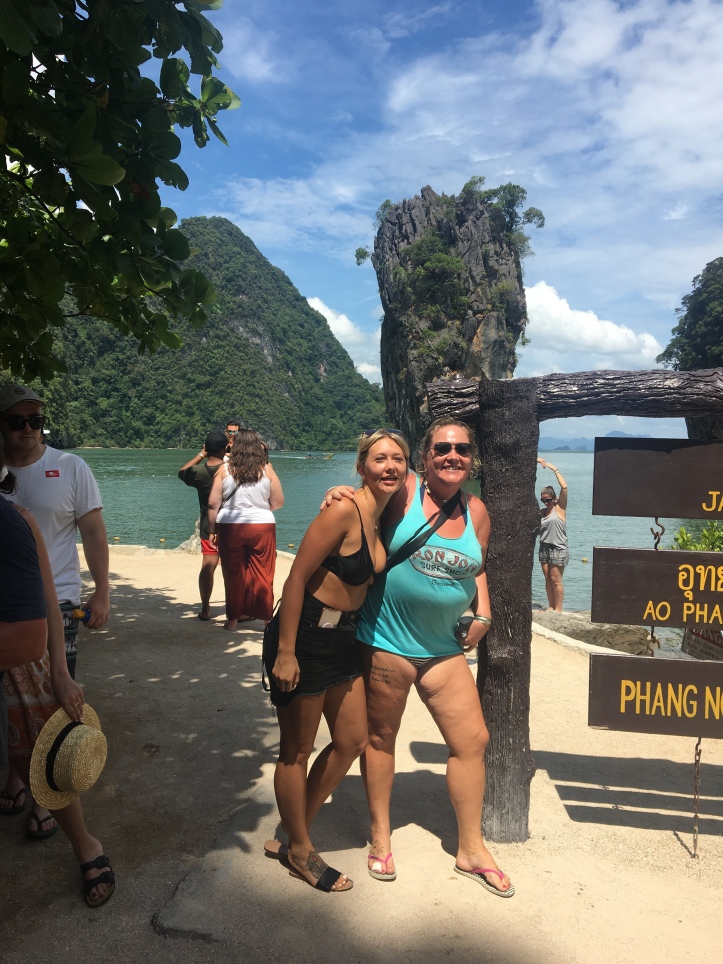 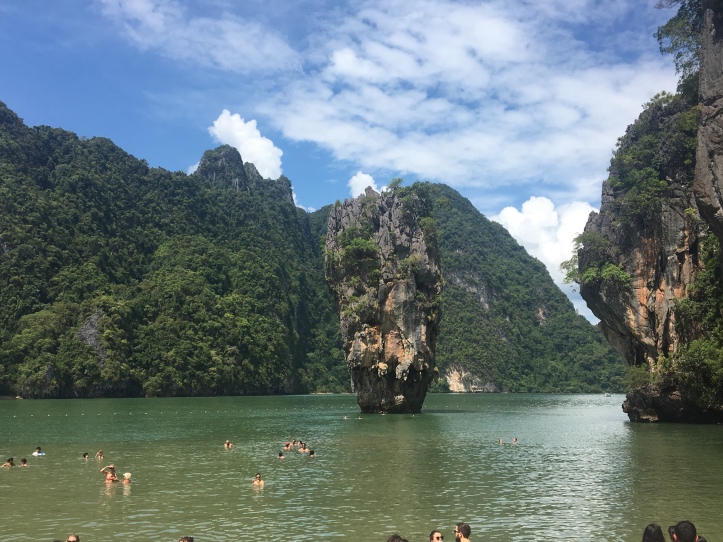 From here it’s to a floating island for lunch.

The only annoying but here is that we’re led in a merry goose chase through market stalls to get there when all we want to do is eat. Finally we arrive and promised local Thai food it is very much a disappointment. Lastly it’s to another island for snorkelling and beach time. 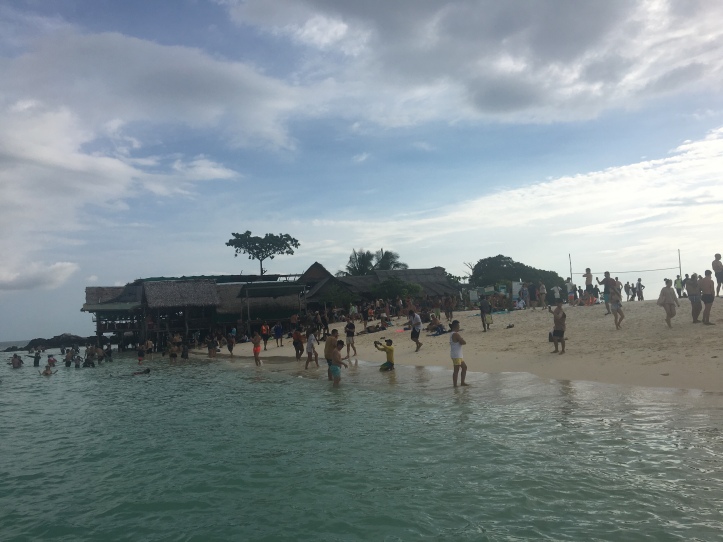 Dave goes for a wander whilst I soak up the rays…and bizarrely get chatting to some people who live in the same town as my friend from Chile!

It’s been a long full on day and it takes ages to get back in the traffic. I plan on an early night but Paul and his sister Gail have introduced me to fellow backpacker Katie and we end up in Sutin’s bar.

At least I remember getting home and it wasn’t at closing time either!

Thursday and it’s back to Chalong as I’m not sure I’ll see Ernie again before I leave. Whilst he has a full on day of training, I chill by the pool near theirs. It does dawn on me all the training camps around here and last year I wd have jumped at the chance to do it too. With a broken toe there’s no way I can and I’m just resigned to get back into it come January. I’m treated to lunch and a wander round the shops before I bid farewell to Ernie

and the boys. I’m leaving earlier this time and make it back no problem. I even see Paul, Yo and Gail en route!

Friday again and it’s back to the Boathouse with Dave and this time sans scooters! It’s again a delicious menu and the wine really doth floweth! 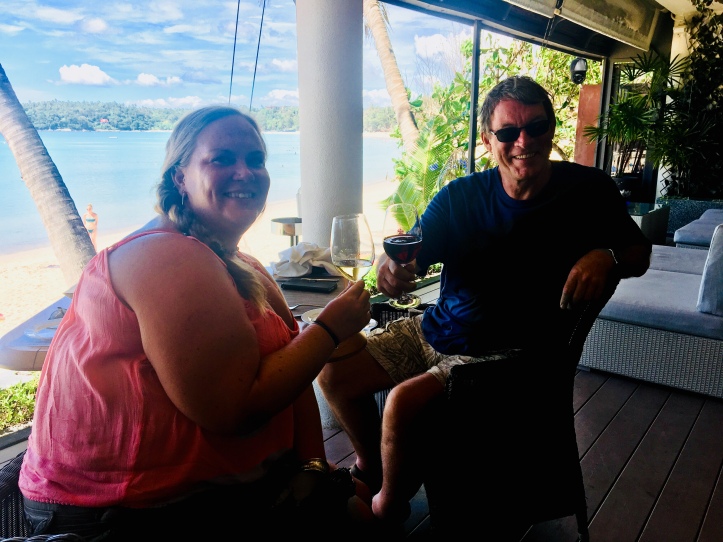 We go to a beach bar for a few more – more than intended as there’s a massive storm.

During this, I arrange to meet Ernie and the boys in Patong. I get there but tbh most of that part is a blur.

I end up back in Chalong probably thinking it’s safer and cheaper to head back with the lads…not realising I’ll still have to get a taxi in the morning! Saturday, the lads manage to get up and do a tour whilst I stay and sleep off yesterday. Back in Karon and after food it’s bed. God I feel bloody awful!

Sunday and my last day. After a morning at the beach and feeling so shit yesterday, tonight is meant to be a quiet one. That was until after dinner, I have many people to say bye to and have a drink with. We go to Pen’s for one which is a standard joke here in Karon and I think I end up leaving around half 3. I now only have about 3 hours until I have to leave but hey ho, it was a great night with a whole bunch of lovely people I’ve didn’t the last 2 weeks with. 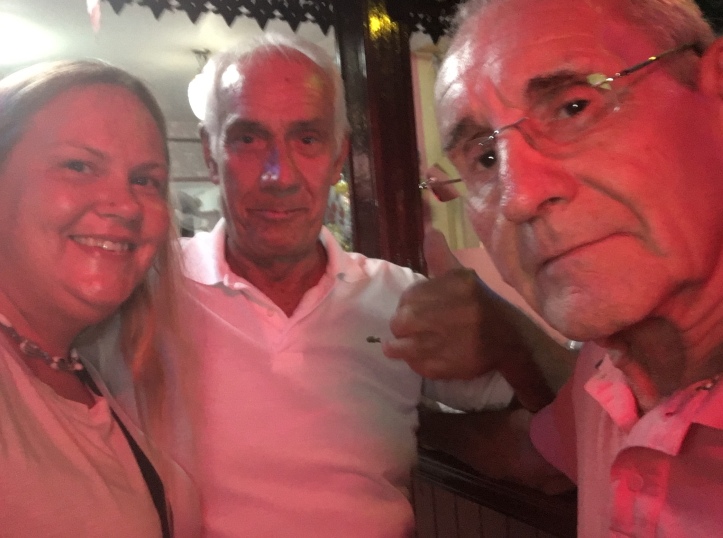 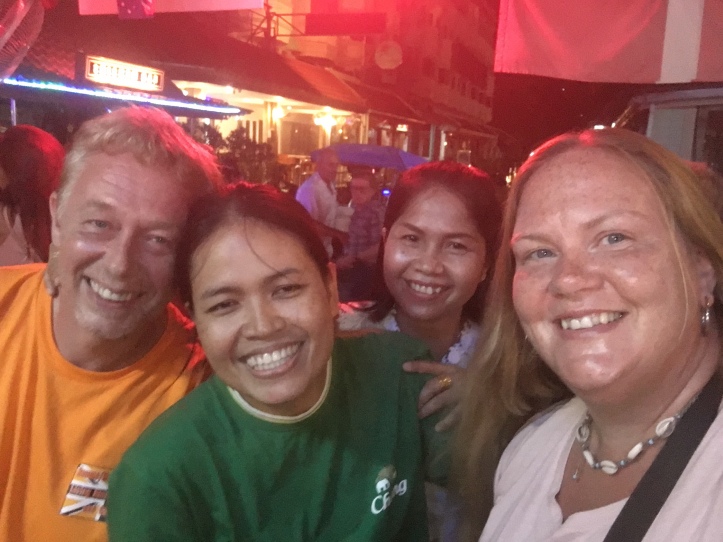 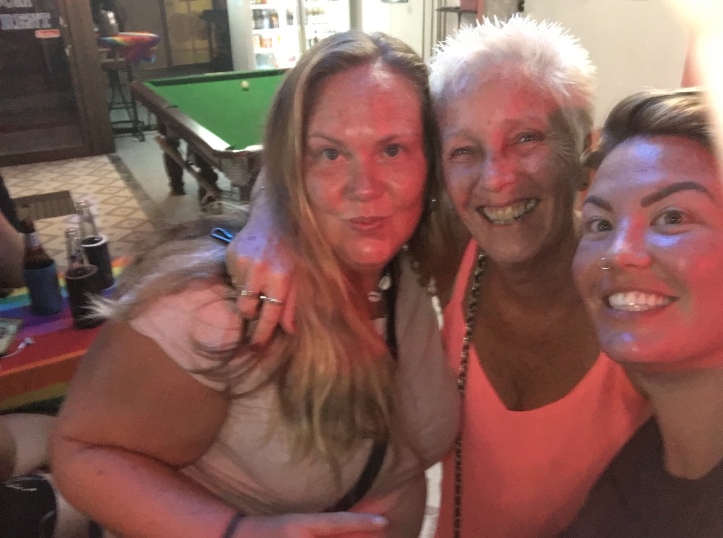 Phuket was meant to be a chilled break but ended up being the craziest and booziest 2 weeks of my entire trip! Despite breaking the bank (Phuket is not cheap), I have met some truly lovely people, got to catch up with both Dave and Ernie and did have a brilliant 2 week holiday. If ur ever in Karon, definitely go pay Paul at Oasis and Craig at the Living Room a visit. A warm welcome awaits u at both.