Having looked online I learn about some of the main temples you should see here in the Old City. I plot them all on the map and set off to do my own tour.

A wat is a temple complex that includes the main building where the prayers take place and where the Buddha statues are displayed. The chedi or stupa is a watertight sealed structure that contains the relics of Buddha.  These are the big tower dome shaped things outside every temple building.

Setting off towards the Old City, on the north western corner is Hua Lin Corner.

The original wall was started when Chaing Mai became the capital of the Lanna Empire in 1296 before being fortified and moated over the years. During the Japanese occupation in WWII, the wall was taken down to reuse the bricks for other purposes. From 1966-1969 the wall was reconstructed by the City based on how it appeared in a series of photos from 1899.

Carrying on along the northern wall, I very quickly come across Wat Rachamontian or The Dragon Temple…and wow! This is fairly impressive with big gold and purple gates and 2 big dragons guarding the entrance.

The temple dates back to the 1400s. This place definitely has the wow factor,

especially with the enormous seated Buddha on the left of the temple. 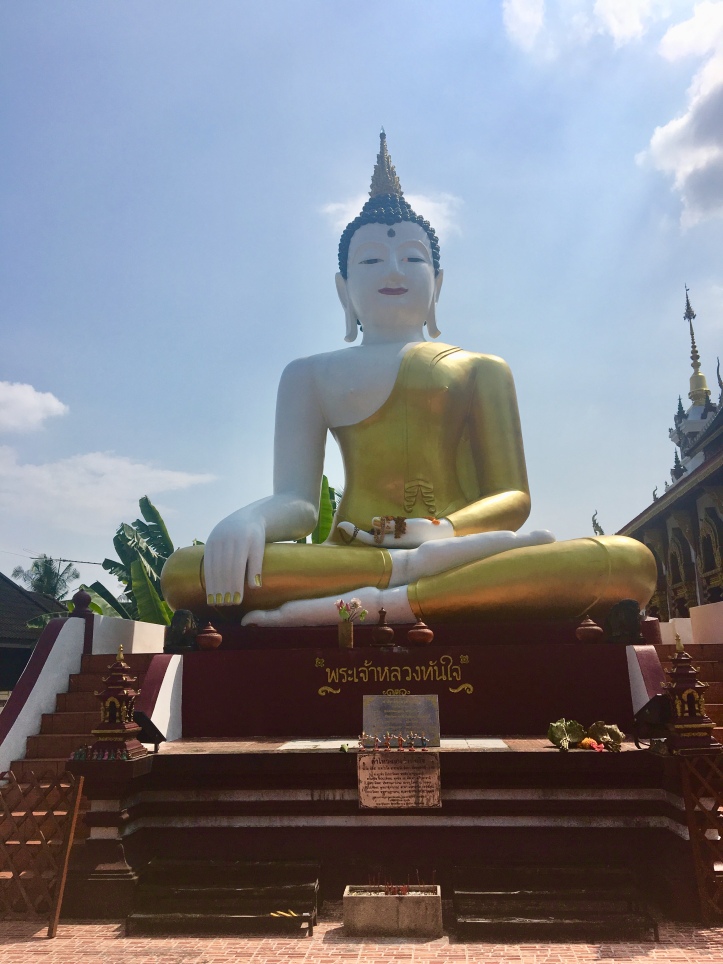 I don’t understand much about Buddhism yet but these places are of incredible beauty.

A few minutes further down the same you road and you come across Wat Kun Kha Ma, noticeable because of all the golden horse statues it has outside. 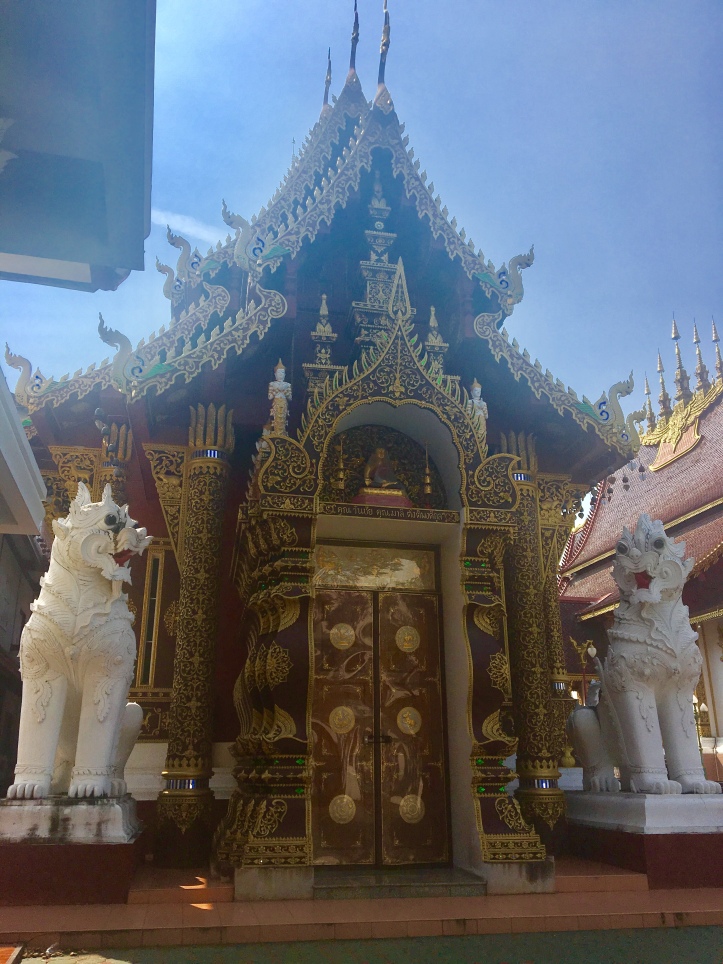 I haven’t been able to find much info on this place which is a shame as it’s absolutely incredible.

I then reach the oldest temple in Chiang Mai – Wat Chiang Man and dates back to the start of the city.

When King Mengrai decided to build a new city and make it the new capital of the Lanna Kingdom, he built the Wat Chiang Man as its first temple. The temple holds several very true old and important Buddha images. The chedi is one if the most famous because if the 15 life size elephants that surround it. 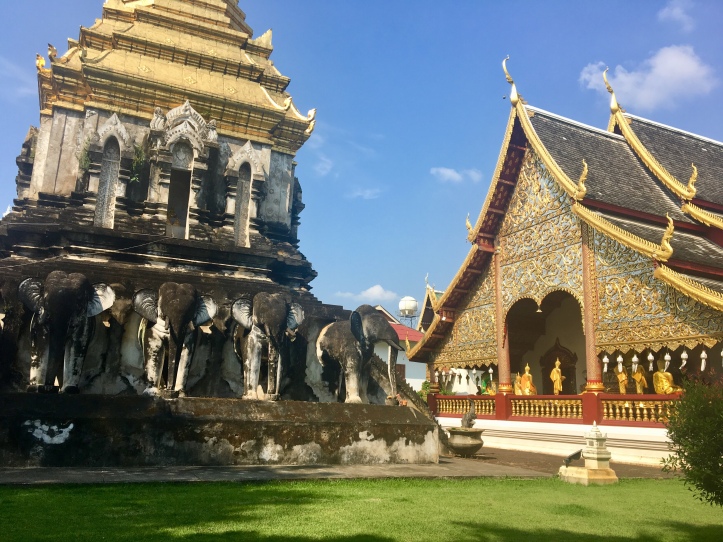 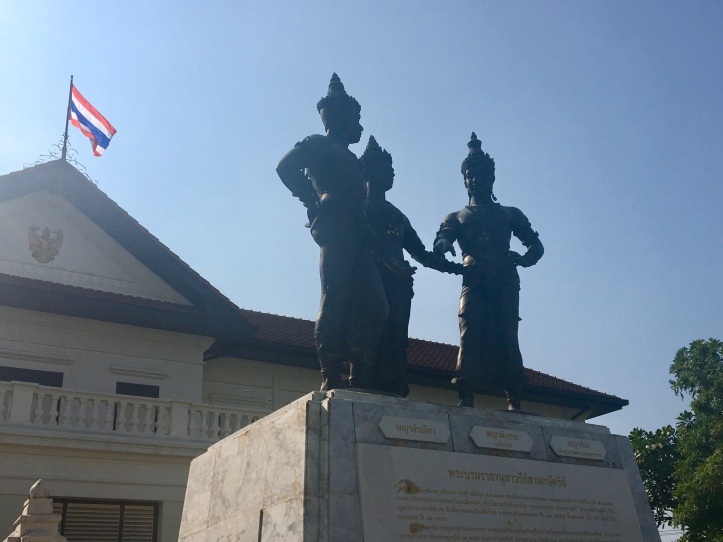 which sits in a big courtyard. This is a large statue of sling Mengrai (the founder of Chiang Mai) and his 2 aides on building the city – King Ramkamhaeng of Sukhothai and King Ngam Muang of Payao.

From here I pass by Wat Inthakin Sadue Muang

and then onto Wat Phan Tao. This temple was built in the 1300s as one of four temples in the Royal Stupa Complex. The temple is called The Monastery of a 1000 Kilns because it was the place where monks handcrafted Buddha statues for other temples. 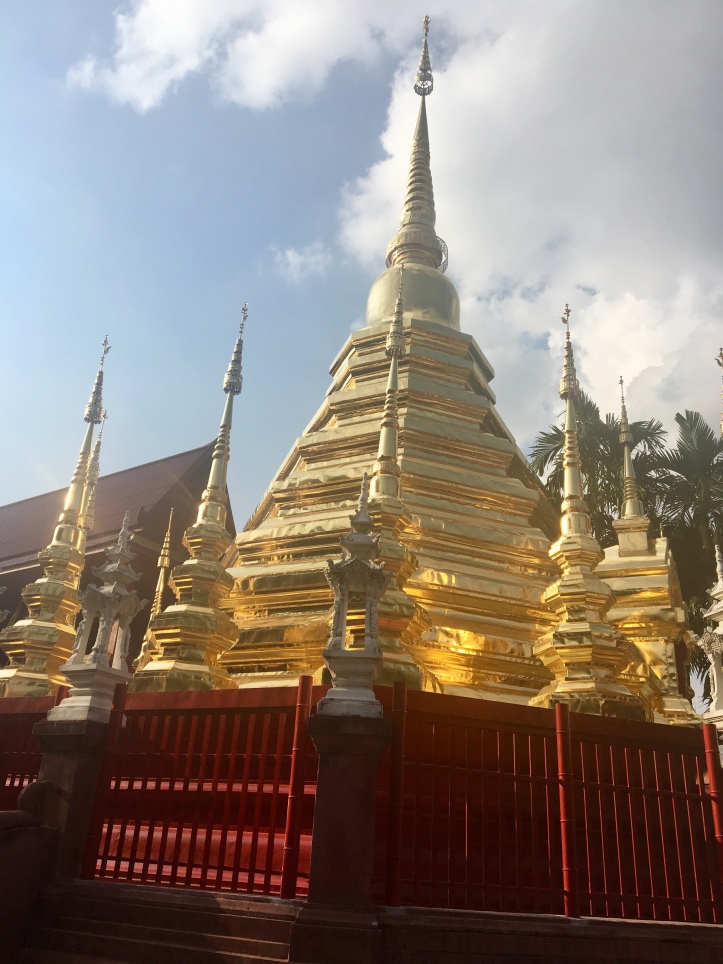 Next to here is the massive Wat Chedi Luang but I can’t enter as I’ve forgotten something to cover my shoulders. This is one I’ll definitely be back to tomorrow.

I pass by Wat Tung Yu and it’s white Buddha 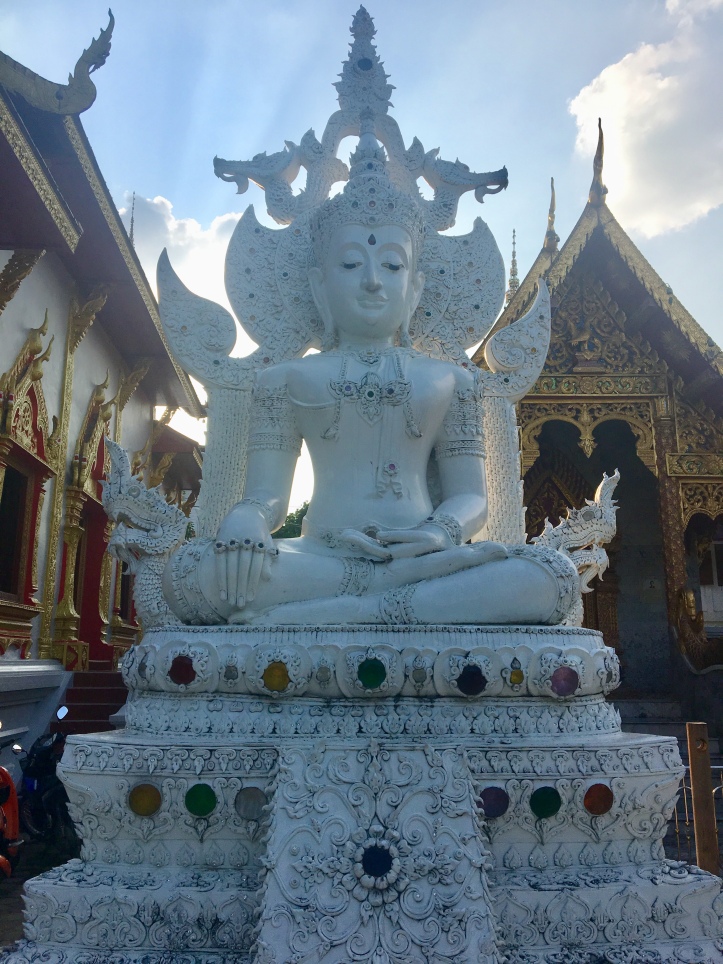 before the one of the biggest and most magnificent temples of today, the Wat Phra Singh.

This temple emerged by King Phayu building a chedi in 1345 to host the ashes of his father. Over the years, more buildings were added and the complex took today’s name in 1367 when the statue of Phra Buddha Singh was taken there. The temple was abandoned for a couple of centuries, during the Burmese rule but finally completed and restored in the 1920s.

After all this, I’m now fairly templed out but still hugely impressed by their grandeur and finesse. I’m yet to learn why this is, when Buddhism is usually about simplicity and non materialistic, why are these places so grandiose. My research and understanding will develop but for now I believe it’s because the house the relics of the Buddha and in this faith, people give gifts. The ultimate gift being a nice temple and chedi to house him. I stand to be corrected on this thou….

Im in the area of the famous Sunday Night Walking Market. It used to be on just one street but over the years has grown enormously and sprawls over many in the vicinity. 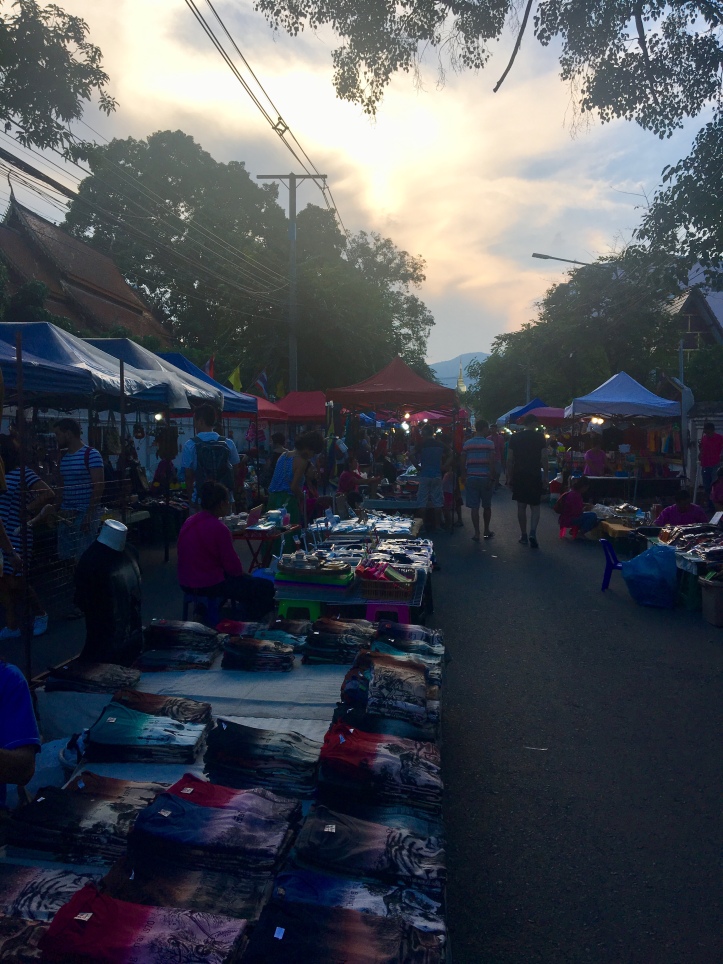 It’s renowned for all your touristy nick nacks – trinkets, lamps, jewellery, elephant pants and tie dye clothing galore, along with anything else elephant related! 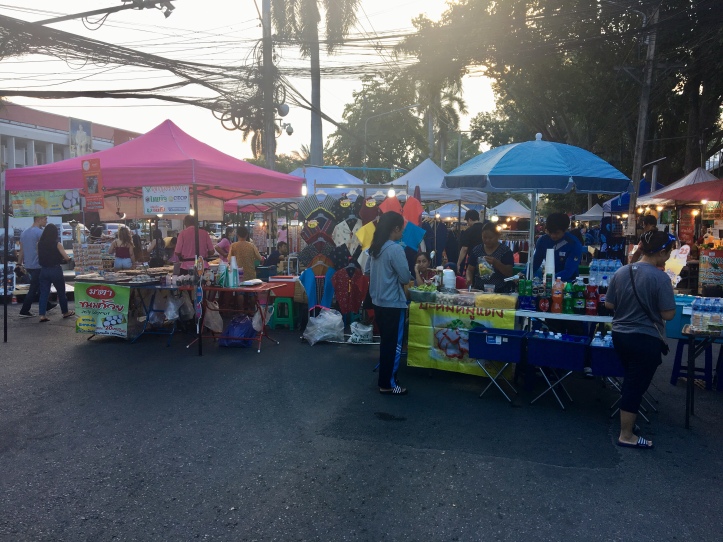 As I’m wandering along minding my own business, suddenly everyone stops -vendors, locals, kids, tourists…everyone. There is a song blaring out too and those that aren’t being quiet are told to be so! Having read a lot about how much the Thai’s love their king, and woe betide anyone speaking ill of him, it dawns on me this is the national anthem and everything and everyone stops what they’re doing as a mark of respect. I hear someone say ‘oh, it’s 6pm’ so I wonder if this is a daily occurrence! Anthem over and the street market is back to its hectic hustle and bustle! I wander round these streets for hours, purchase a few Xmas presents and after some delicious street food and a full day on foot, it’s time to head home.

Monday, after a very chilled and relaxing morning (it’s so nice having my own room and not having to rush around anywhere), I decide to visit the 2 big temples I cdnt do yesterday.

First off, South of the Old City I walk to Wat Si Suphan or The Silver Temple named because of its impressive hand crafted silver decoration.

This is is a unique modern interpretation of a traditional Lanna design. It was built over a period of twelve years, the prayer house is composed entirely of silver and aluminum. The temple is completely covered in silver, from the walls to the roof and display some detailed silver carvings of Buddhism legends.

Even the statues of Buddha are covered in silver. Wat Sri Suphan was originally built around 1500 to serve as the main temple for a silversmith village. Over the years, parts of the temple have been repaired with silver from the local village the process of completely covering the temple in silver only began in 2008. The inside of the temple is even more interesting with silver decoration, mirrors and bright colours mixed together. However due to old Buddhist rules o was not allowed to enter as women are not allowed inside the temple.

From here I stroll through one of the only parks I’ve found in the centre, Buak Had Park 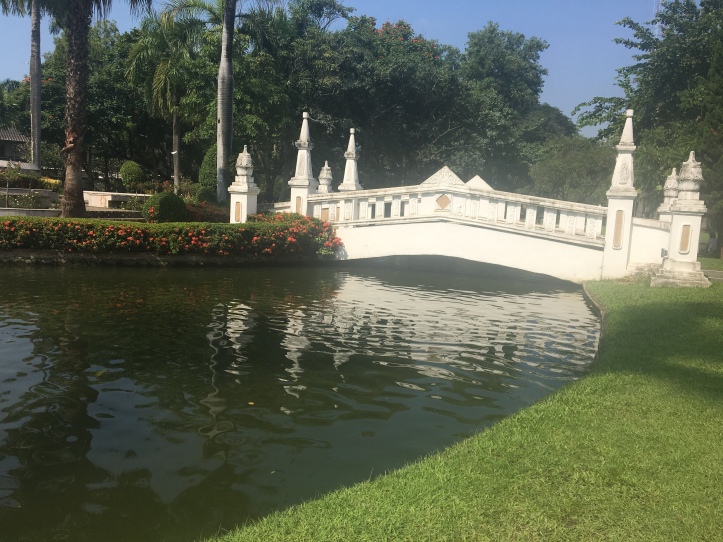 and there are many people lazing under trees taking shade from the scorching sunshine.

Now I head to the temple I cdnt enter yesterday…Wat Chedi Luang. It’s 40 baht to enter and you are greeted by an enormous prayer building. 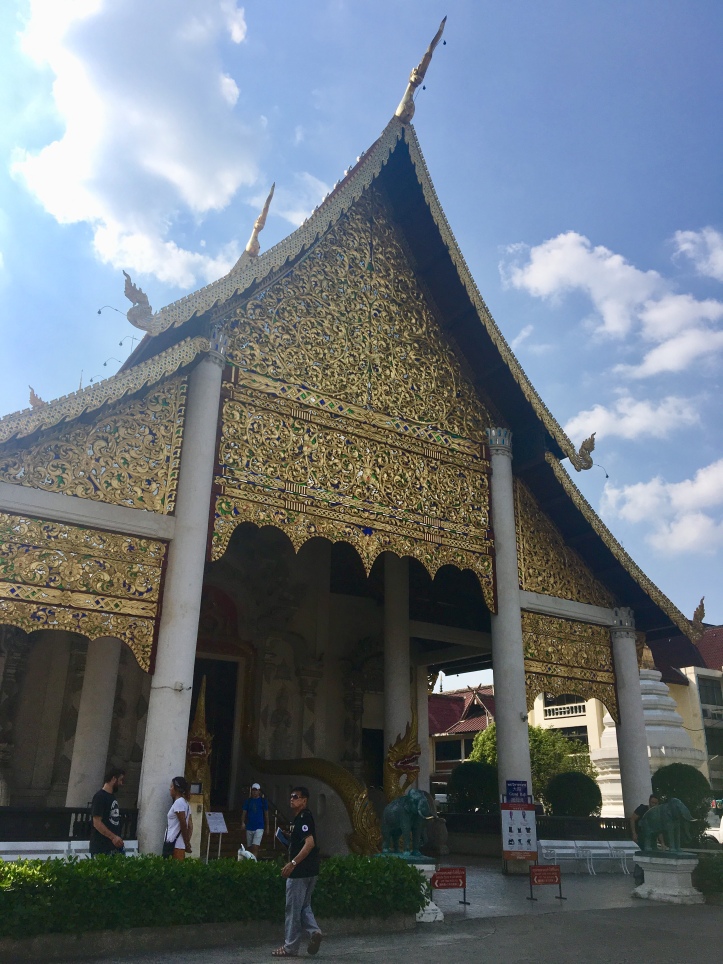 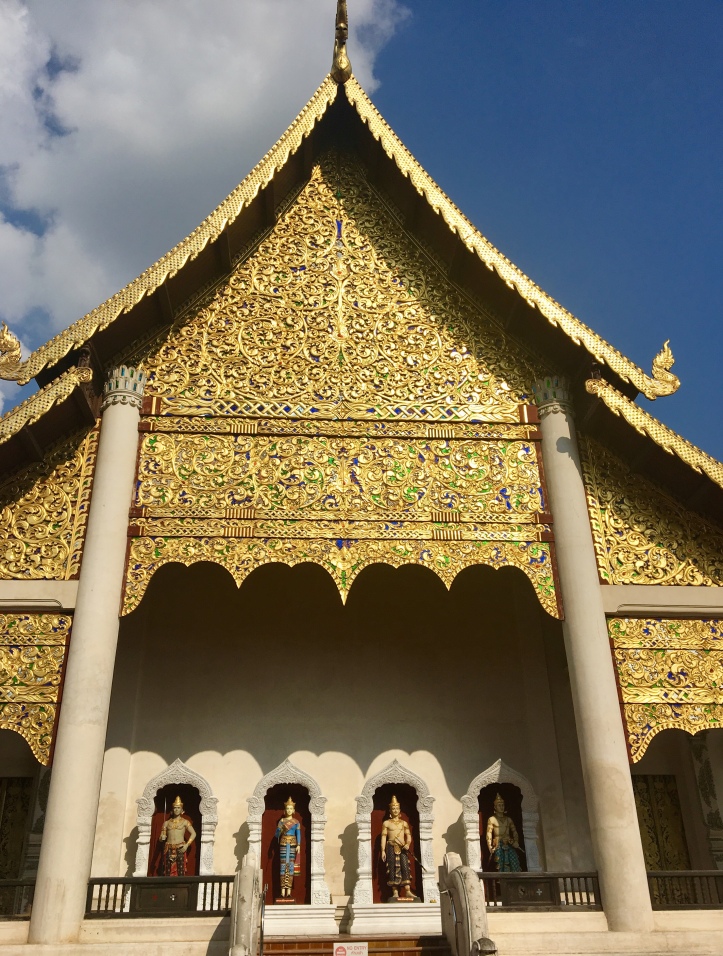 The main attraction here however is not the grandiose of the buildings but of the huge brick pagoda known as the Great Stupa. The pyramid-like Stupa was first built in 1391 ordered by King Saen Muang Ma to house the ashes of his father Ku Na.  Over the next 84 years, other Thai Kings added to it.

At its peak, the chedi measured 60 metres across at the square base and 80 metres tall and was once the home of the Emerald Buddha, Thailand’s most sacred religious relic. Damaged during an earthquake in 1545, the chedi’s height is reduced to nearly half of its original size yet it is still an impressive structure. In 1992, the Fine Arts Department finished restoration work around the chedi, bringing back the naga (water serpent) staircase on each of its faces and wonderful statues of elephants adorning the base. 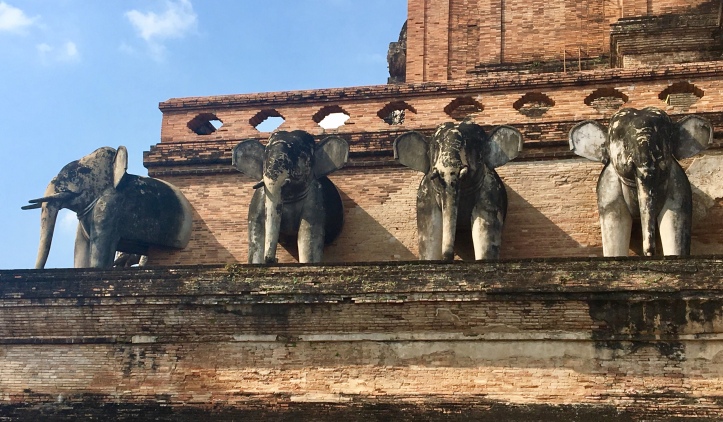 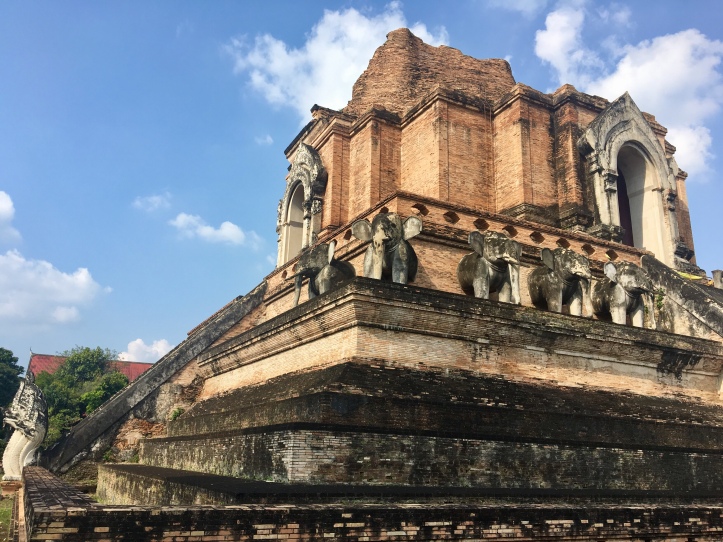 The actual work on the chedi itself, however, was never quite complete, leaving it in its present state. It was, and still is a most impressive structure and sight.

With my temple tour well and truly complete, I take myself off to treat myself to a pedicure. Massage and nail salons are ten a penny here but I descend upon Chic’s Nail Bar. The girls working here great, super friendly and do an amazingly thorough job and it costs the fraction of the price back home – less than £6!