So with a snow day yesterday where we were advised not to venture out to do any hikes, KyongJa my cool and uber friendly roommate from New Zealand and I eagerly await for 2130 for the weather report for tomorrow. Rain is forecast but we’re told if we set off around 8am, we should be ok. Tomorrow is my last day so I’m excited that I can do the main hike I came here to do.

We’re up and eating breakfast early, a good hearty portion of porridge (first time I’ve ever eaten it) and like the Readybrek man, we’re ready to start our hike with a good old energetic glow! We’re both extremely excited as we’re embarking on the most famous hike in the area – the Sendero al Fitz Roy.

Last nights rain didn’t happen and neither has this morning’s, making it better to go walking but means much of the snow hasn’t cleared. Luckily not many people have walked the route yet so it’s fresh and crunchy under foot. Passing through the entrance,

it’s a slight incline for the first km or so but to those used to any kind of hiking, the incline isn’t really noteworthy. Of note today though due to being quite slippery. It’s very pretty thou

In less than 1km we reach the first viewpoint, that of the Río de las Vueltas Mirador which means The Winding or Meandeting River 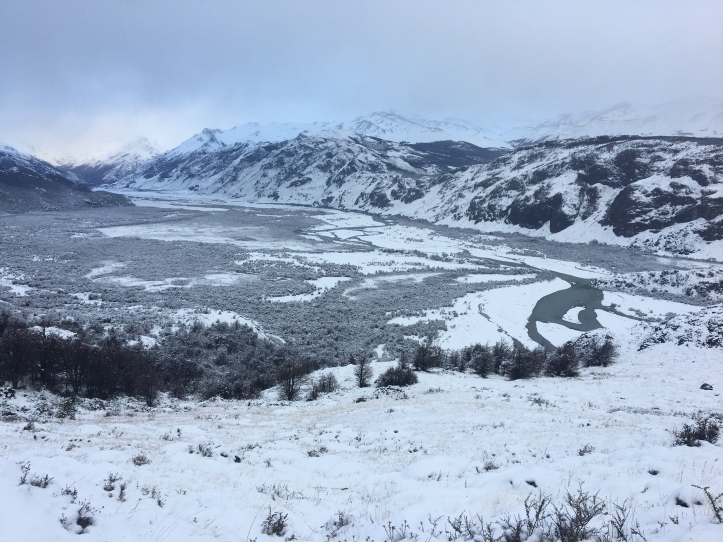 and looks out to the valley below. Great views but everything again does look black, white and grey.

Wanting to get on, we waste no time and move on. We walk through forestation of nirè and lenga trees, cross small creeks and streams to reach about 3kms later Laguna Capri. This is a beautiful lake surrounded by snow capped mountains that give way to great reflections in the water below. 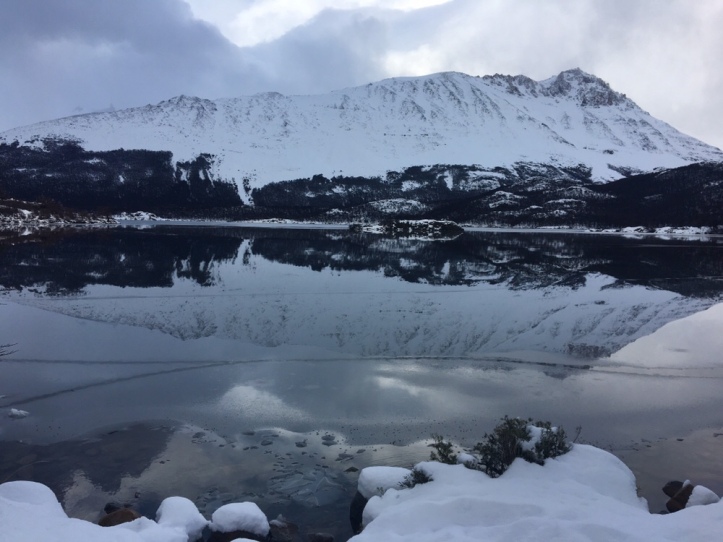 Unfortunately, the one impending and impressive sight that should be before us and the one we desperately wanted to see reflecting in the lake is that of the mighty Fitz Roy but she’s hiding behind a mound of thick clouds and not at all visible. We are however delighted to be where we’re at and take pleasure in what we can see rather than what we can’t. A few photos and a quick refuel then we plough on through the snow.

The path from here gets worse and I’m less than impressed. My once upon a time waterproof boots are now failing me big time and my feet are sodden probably not surprising considering the path is now a mix of deep slush, deep muddy bogs or snow melted to such an extent the path resembles a stream! Several times I think sod this but I’m not a quitter, I’ve come here to do this hike and this hike I will do!

We pass some people who have camped, including 2 guys from our hostel and who I had already met in El Calafate. They had a pretty tough night with all this snow fall and sadly didn’t get to see a great deal either. We cross a bridge and get our first glimpse of the glacier.

Many say to head to Poincenot but this I think is just for the campsite or if ur doing the Laguna de los Tres route – we have been told several times and by a national park ranger that this route is currently not safe…it’s very steep and extremely icy. In these parts of the world and in these conditions, u can’t ignore this kind of advice…they know what they’re talking about. This is something I would like to do thou so maybe next time.

For now, the best way is to turn right at the sign post and head to Piedras Blancas. We have to walk slightly off piste as this path is currently flooded! We get a great view beforehand

but a short stroll through another forest then we reach the mirador. Again another wow!

From here we have amazing views of the Piedras Blancas Glacier…it’s blue colour boldly standing out against the black and white of the mountain and snow. 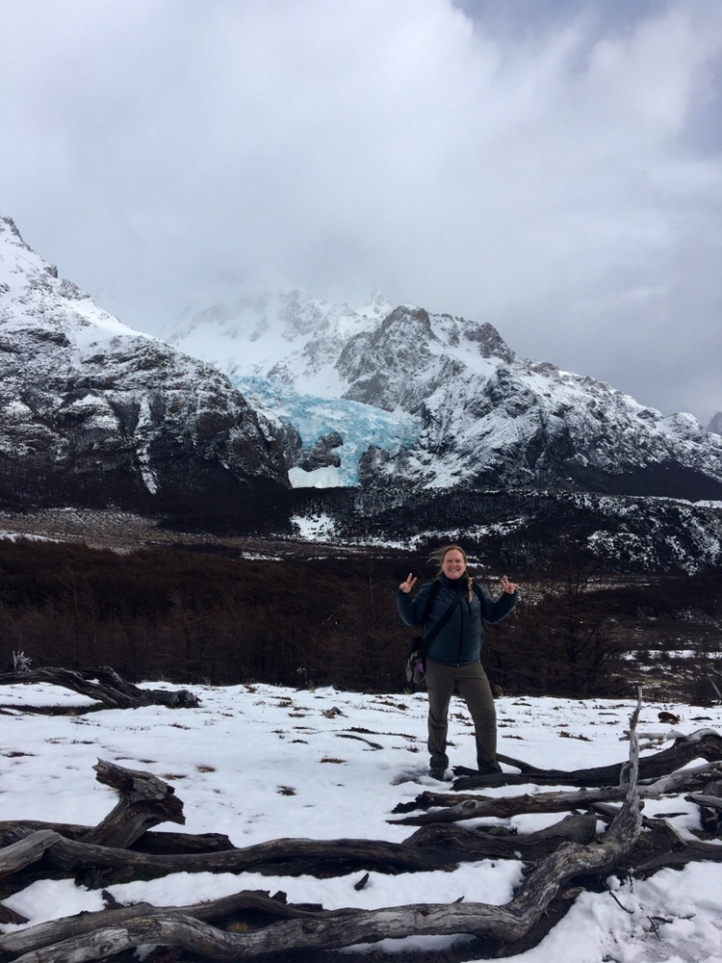 These have been made even more famous thanks to Yvon Chouinard. After summiting Fitz Roy in 1968 with a team from the USA, he used its shape to inspire the logo for his Patagonia clothing brand. 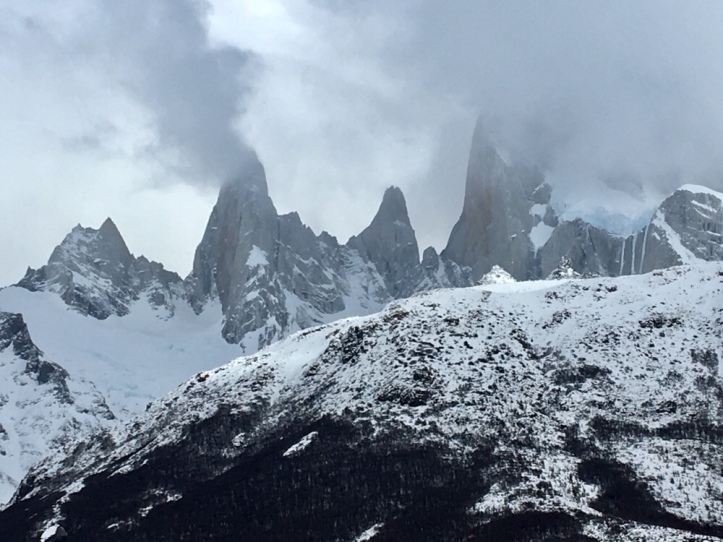 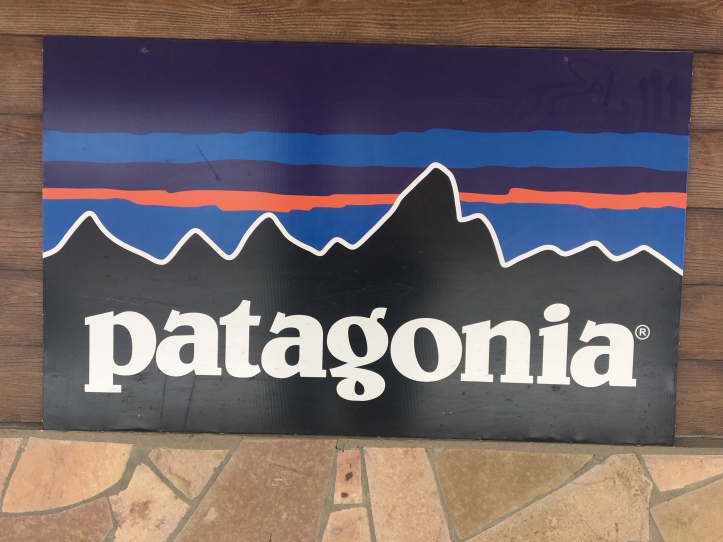 Unfortunately this formidable main and tallest peak is still covered by cloud. It subsides slightly so we can just about make it out but we don’t get to see her in all her glory.

She isn’t the highest mountain in the range by any means, only 3,405m but Mount Fitz Roy is one of the hardest mountains to climb in the whole world due to the weather and it’s extremely steep slopes. She may only be climbed during a very brief period in the summer. Those who attempt to reach the top must be really fast and play with the good weather to succeed. It’s not unusual for only 1 ascent to be made in a year. I tried to find out how many times the summit had been reached but I’ve been u successful so far.

The Tehuelche’s used to call this mountain Chalten, a name which meant smoking mountain. This was due to the clouds that rested on its summit almost constantly, which made the locals of the area believe this was a volcano.

On March 2 1877, Argentine explorer Francisco Pascasio Moreno gave the mountain the name Fitz Roy after the Captain of the Beagle, Robert Fitz Roy, who had toured around Santa Cruz fifty years before.

In 1952, a French expedition made up by Lionel Terray and Guido Magnone, amongst others, scaled the Southeastern side of the mountain. They were the first to hit the summit resulting in a new chapter in the history of Argentinian and world mountaineering.

and talk of rainfall, we decide to head back. The path for a while is a lot better due to much of the snow melting. We see the cloud starting to mo and leg it through the forest to try and see if we can see her but still the clouds won’t shift!

A quick stop at Lake Capri again where there are now many more people than this morning but the view is nowhere near as good as it was earlier as there are no reflections on the water.

The last 2-3kms is tough – it’s now really slippery and with a downhill incline make it really hard work. I’m teetering along and it’s painstakingly slow…that is until KyongJa lends me the cramp ons she brought along…these are great little plastic things with elastic you put over your boots. They only have small spikes under ur foot and heal but by god they do the trick. I don’t know if it’s just a confidence booster but I can walk in all this snow, ice and slush at a normal pace without the fear of falling flat on my ass!

We reach the point where we started

and have covered 20kms in just over 6 hours. It’s an easy route normally but the snow ice and mud did make it slightly harder. I did however love these little beauties.

It was a beautiful hike and was great to do with KyongJa. We chatted and laughed all the way – especially when one of us slipped or went deep into a muddy bog.

Tougher due to the snow but a lot prettier because of it too. The hike was also much more enjoyable with good company.

Back at the hostel and it’s a hot shower and some chill time whilst lamenting over a fabulous trek and an incredible week in one of the most beautiful parts of the world I’ve been to in my life.