This morning I’m leaving for the small town surrounded by beautiful mountains – El Chalten which is only 3 hours away from El Calafate.

It’s a cold walk to the bus station and just as cold on the bus. I’ve read lots about air con on Argentine buses but this is the first time it’s been on and typically in deepest Patagonia when it’s no more than 2 degrees outside!

I while away the majority of the journey resting but as we approach El Chalten, the magnificent scenery draws me from my book and I just gaze out the window. All heads in fact are looking in the same direction…to that of one of the most famous mountains in the world and the emblem of a very famous outdoor clothing brand…the impressive Mount Fitz Roy.

We make a stop at the visitor centre and get some info on local treks. I’m not sure why – maybe for people that are just here for the day…finally it’s into town and to my hostel.

I grab some lunch, check in and ask about the short hike that there is to do. I plan to do the 2 bigger ones over the next 2 days. That was until the lovely receptionist tells me that today is a lovely day and the forecast for the rest of the week isn’t so good, that I’d be better off getting the shorter of the 2 done this afternoon. In this part of the world, local knowledge is definitely best so I adhere to the advice given and decide to set off on an 18km 6 hour hike, leaving st around 2pm. I just hope I’m back before sun set! I do however wish I’d known this before lunch as I’d have had something much lighter!

Once I’ve got to the path, it’s all relatively straight forward and sign posted. With a fear of getting lost in the mountains, I also have Maps Me on ha d that shows trail routes too!

It isn’t long until I reach the first mirador point of Cascada Margarita…a waterfall on the opposite mountain.

It also provides a stunning panoramic view of the Cerro Solo, Adela range, Cerro Torre and Mount Fitz Roy. It’s incredible…I’m so happy to be trekking through this amazing mountain range again. 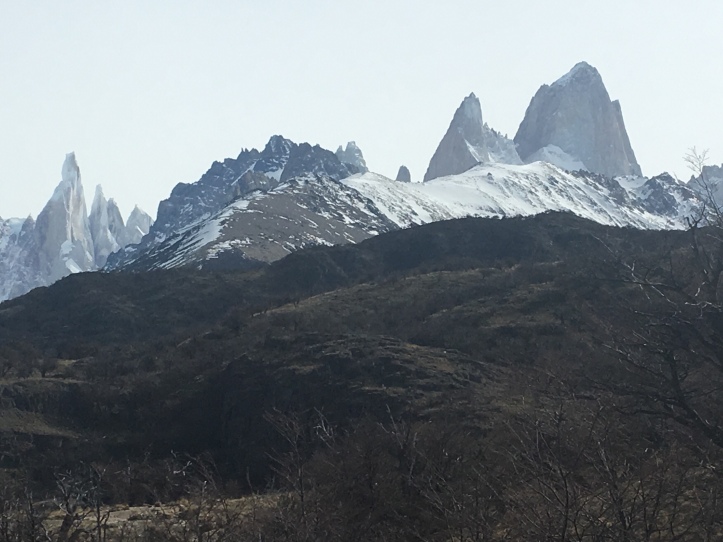 Next stop is by a stream where my map tells me you can drink from. I take a look but am deterred by the ground the water runs over…I’m not dying of thirst so will give it a miss than risk a tummy bug.

The next big viewpoint is the Cerro Tore mirador.

It’s a big breakout point with toilets and benches to sit and admire the amazing view. As breathtaking as it is, I need to get in to be able to finish the hike before it gets dark.

As I continue along the path, surrounded by these enormous and beautiful mountains it dawns on me that this is my last venture into this magnificent mountain range. 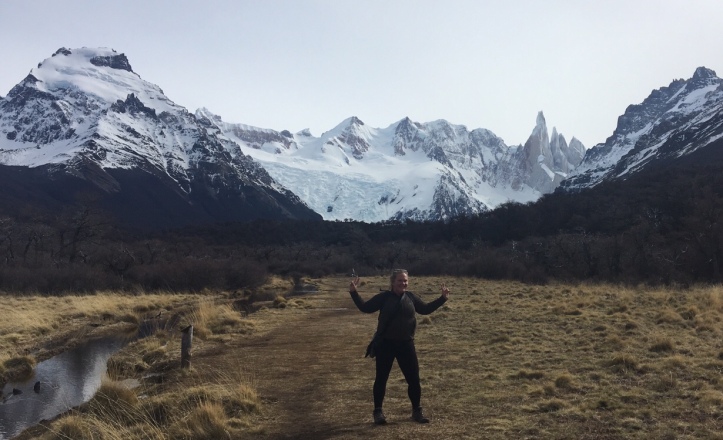 After months of being in the Andes, never once taking them for granted, in fact I’m always more and more impressed by their enormity, grandeur and beauty it really hits me hard that I am soon leaving this part of the world. I have thoroughly enjoyed and loved every minute of being here and the realisation of leaving does cause a few tears to roll.

Luckily, a bit further along the path, I meet José and we end up walking together. This stops me dwelling on the fact I’m leaving and brings me back to the now where I simply enjoy his company and my surroundings.

It’s not a difficult or technical hike, just a few muddy patches along the way. We get to the lagoon and all I can muster is ‘Wow’!

What another incredibly beautiful amazing place. Argentina blows me away every time I go to a new place. After a few photos, we each sit on a rock on the lake, captivated by this wondrous sight in front of us. 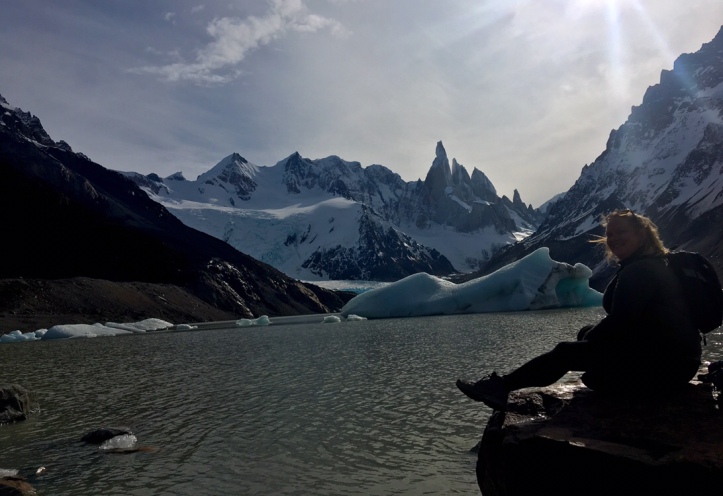 Silence is all there is and we just sit and admire….there are no words.

Torre Lagoon is at the foot of the amazing Adela range, Torre and Grande glaciers and the incredible Cerro Torre. 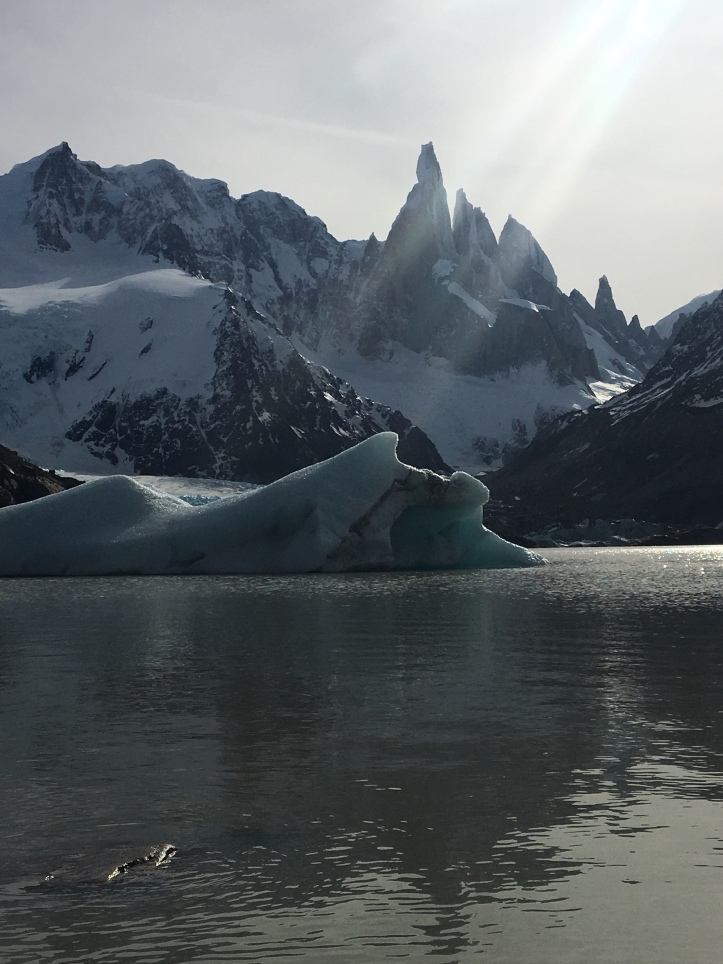 Ten minutes before arriving to the lagoon, there is the DeAgostini base camp for those wanting to camp.

The mighty Cerro Torre stands at 3128m. It’s actually famous not just for its height, beauty and shape but more for the controversy that surrounds it.

Back in 1959, Casaré Maestri claimed that he and Toni Egger had reached the summit but that Egger had been swept to his death by an avalanche while they were descending. It is claimed however that there is no evidence proving their climb in that year. The first undisputed ascent occurred in 1974, by another Italian team led by Casimiro Ferrari. While most people these days regard Maestri’s 1959 climb to be a hoax, there are still many individuals who believe he did climb it.

Although his first ascent is disputed, it’s his second attempt that caused more controversy. He arrived armed with a 150 kilogram petrol-driven compressed air drill to attach bolts into the side of the mountain. It’s this “bolt ladder” that has so offended climbing purists since…many saying he murdered the mountain.

Slovenian climber Silvo Karo famously said Maestri had stolen the future of the climb…meaning that a genuine first attempt of that route could never be undertaken by mountaineers again.

For 40 years the Compressor Route as it’s now known has been the normal route up Cerro Torre. 90% of the ascents since have been via this route, where climbers have some 400 bolts they can choose to attach to most of the way to the summit. That was until January 2012 when 2 new mountaineers Kennedy and Kruk made the ascent and avoided Maestri’s bolts. Having reached the summit on grounds of ‘fair means’ should have shot these into the limelight for great reasons and success. It was their actions on their descent that gave them their noteriety and for all the wrong reasons. For on their way down, they decided to remove as many of the bolts as they could, effectively erasing the Compressor Route. They believed they were doing the right thing, that they were claiming the route back again for the purists, yet when they arrived in the village of El Chalten, rather than a heroes welcome they were arrested!

Despite ur take on this, whatever ur stance on who did the right thing…one thing is still undeniable that this is an incredibly beautiful and magical place.

There’s an extra path you can do to get a better view of the glacier but with it taking another 2 hours to get there and back, sadly we don’t have time to fit this in today. With one last look out to Cerro Torre and the lake, it’s time to say goodbye and head back to town.

The walk back goes quickly with my companion José. Coming from Peru but living in Spain, we talk about loads from the history and politics of our respective countries to hiking routes and fine wines! I forget to get his details but it was a pleasure walking with him. He’s a lovely and interesting guy with a passion for the outdoors and great conversation.

For where I am, it’s been a beautifully pleasant day but now 7pm, it’s getting colder and I’m glad to be back in the warmth of my hostel.