I arrive in the main square of Gaiman around midday and make the short walk to my b&b only to find its shut. The adjoining tea room is also shut. I ring and a chirpy and friendly woman tells me that check in is from 2pm onwards and that she’ll be back in an hour or so.

No problemo, me and my hefty rucksack go off in search of some lunch only to find that everything else here is shut. This little Welsh town is sleepier than most Welsh towns I know! Wandering around, considering this town is famous for its Welsh settlers, it is seemingly bereft of anything Welsh…apart from a few tea houses and street names 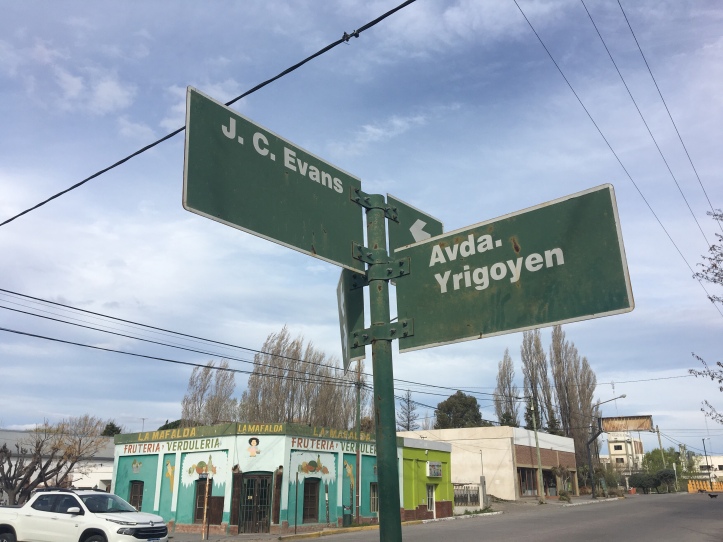 There’s no sign of any dragon flags, no leeks or daffodils or even a rugby ball!!! It’s actually quite an anti climax. I don’t know quite what I was expecting…the dragon flag swaying proudly from every house, back to back terraces, choruses of calon lan and bread of heaven! At the moment it resembles Wales about as much as any other South American place I’ve been…

Finally finding somewhere to eat, I while away an hour or so over lunch and look into what drew the people from my homeland here over 150 years ago….

Having arrived in Puerto Madryn 28th July 1865 and having been told that it was much like the green and fertile lowlands of Wales, what they actually found was a barren and inhospitable windswept pampas, with no water, very little food and no forests to provide building materials for shelter. Despite receiving help from the native Teheulche Indians who tried to teach the settlers how to survive on the scant resources of the prairie, the colony looked as if it were doomed to failure. They decided to move on, in search of better land and embarked upon an arduous walk in land. Once they reached the valley of the Chubut River, their first settlement was built at the end of 1865 – a small fortress on the site which later became the town of Rawson.

The colony suffered badly in the early years with floods, poor harvests and disagreements over the ownership of land. History records state that it was Rachel Jenkins who first had the idea that changed the history of the colony and secured its future. Rachel had noticed that on occasion the River Camwy burst its banks; she also considered how such flooding brought life to the arid land that bordered it. It was simple irrigation and backbreaking water management that saved the Chubut valley and its tiny community of Welsh settlers. Over the next few years new settlers arrived from all over Wales, and by the end of 1874 the settlement had a population totalling over 270. With the arrival of these keen and fresh hands, new irrigation channels were dug along the length of the Chubut valley, and a patchwork of farms began to emerge.

As the Welsh developed the land and spread out further, this was how Gaiman, the town I’m currently in came to be…the second Welsh town to be set up which was in 1874 by David D Roberts. The name of the town you might expect to be Welsh is actually of Tehuelche origin and means wet stone.

Due to the successes here and economic strife in the coal industry at home, the Welsh flocked to this new welsh land, especially between the years 1880-87 and 1904-12. The settlers had seemingly achieved their ultimate goal – there were Welsh speaking schools and chapels and even the language of local government was Welsh. The communities expanded more – Trelew and further afield towards the Andes where the town of Trevelin is. With this success came drawbacks and especially after WWI, where the area attracted more foreign interest and a lot of migration from Europe…especially from

Italy. The turn of the century also marked a change in attitude by the Argentine government who stepped in to impose direct rule of the colony. This brought the speaking of Welsh at local government level and in the schools to an abrupt end but it was still the language of their homes and their chapels.

Despite how things developed over the years, on finally checking in to my B&B which has a very Welsh name Plas y Coed, I talk with the owner in Spanish only to find she is fluent in Welsh and is a welsh language teacher. The Welsh language and customs did somewhat die out and it was only with the celebrations of the centenary in 1965 that brought a revival of the language. This was hugely enhanced in the late 90s after the British Council and the new Welsh Assembly set up a scheme to send Welsh teachers to Patagonia. Wales runs throughout this B&B though with artefacts adorning the walls, especially tea towels! 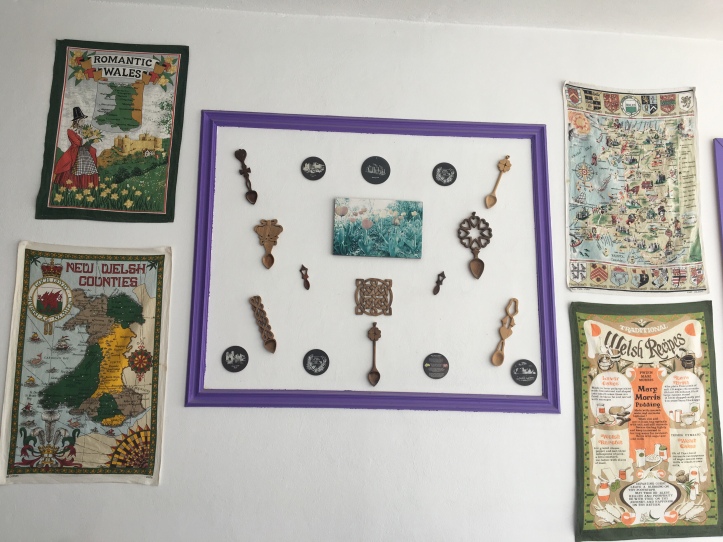 I’m also welcomed with a cup of tea and a Welsh cake….just like the ones my Nan used to make! 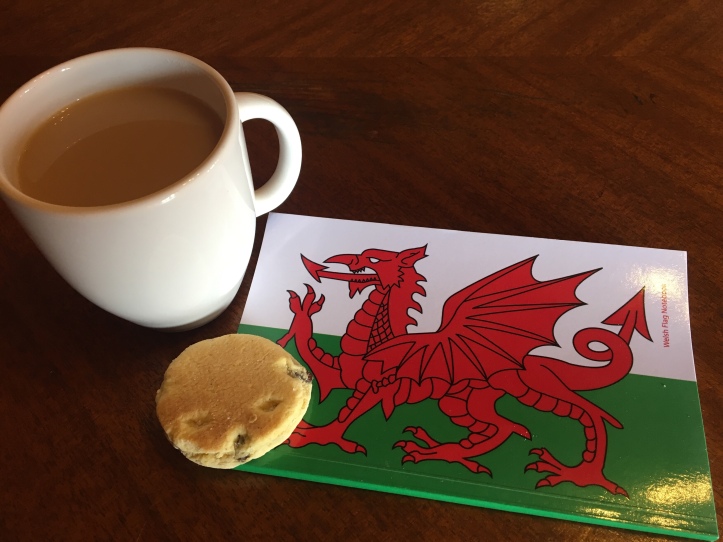 It’s in speaking to my host I find out what there is to do. Not a great deal to be honest, and probably not of great interest to many but being Welsh, I’m keen to explore what there is.

First I walk to Bethel Chapel. There are now 2 on this site, the original from 1880 and a newer one. 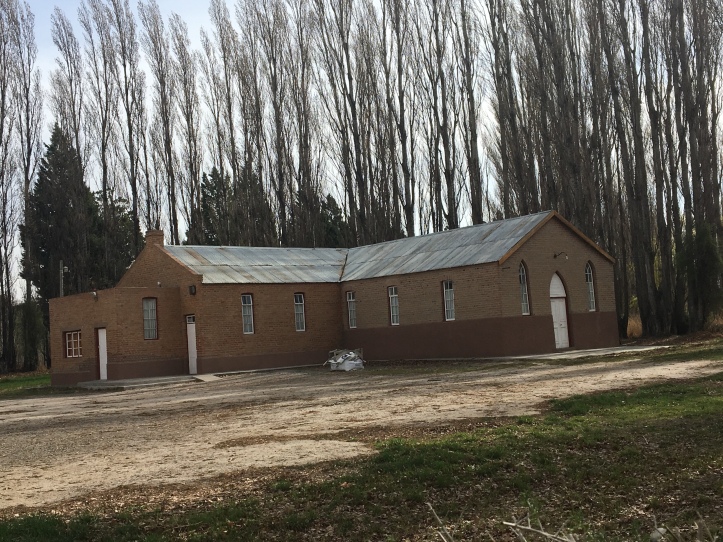 It’s all locked up so I can’t take a look or find out if either are still used. Not far from here is a small plaza with the Stones of Gorsedd.

In 2001, 30 members of the Gorsedd of Bards, visited to reconstitute and relaunch the Patagonian Gorsedd – the ceremonial order of druids who provide the pageantry for Eisteddfod ceremonies. There is an eisteddfod in the coming weeks. I don’t know if anything will be happening here or in the bigger town 30 mins away in Trelew. 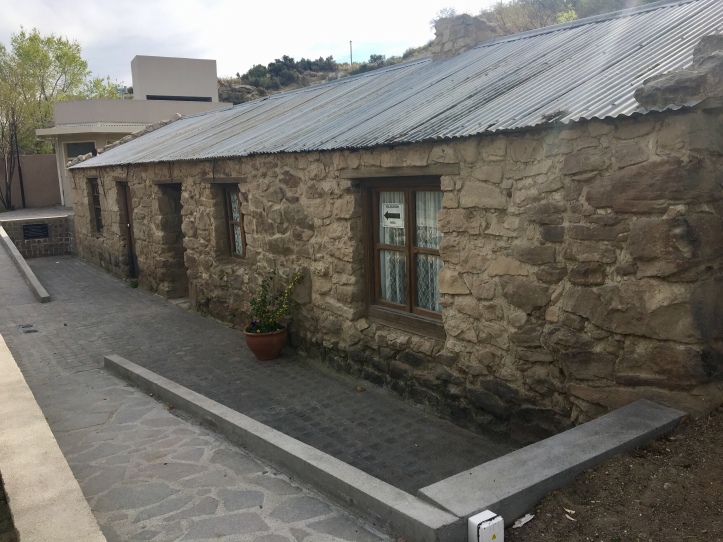 I think it’s probably of more interest to foreign people than the Welsh though – especially as we have St Fagons.

On to the Regional Historic Museum which consists of 3-4 rooms of original artefacts from the first Welsh settlers in Welsh Patagonia or Y Wladfa. It’s semi interesting but more for me by bringing back memories of home and my childhood – like original welsh lady dress, miners lamps reminding me of dressing up on St David’s Day as a kid, and Welsh dressers that most houses back in the day. 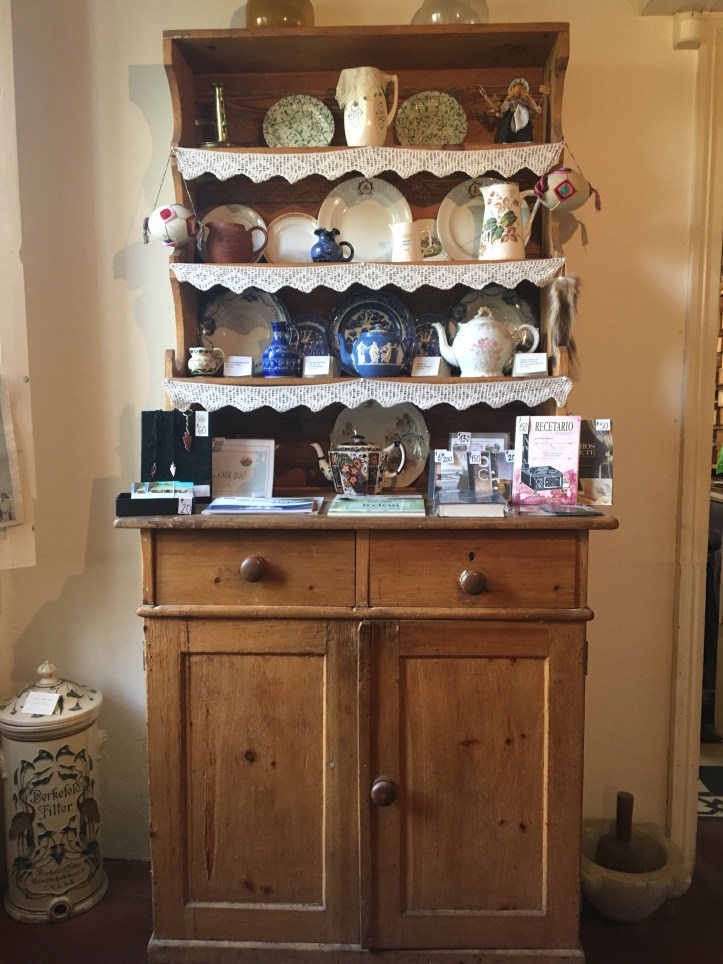 There is also a list and photo on the wall of some settlers and it was strange to see some places so near to home here – Merthyr, Maesteg, Mountain Ash – even Nantyglo!

More interesting than anything was talking to the guy who works here and him introducing me to every person who walked in as someone who actually lives and comes from Wales! It was quite funny as they saw me as just as much an artefact as the things in the museum! Once we had quite an audience of 8 or so people, the guy then led us through to the piano and proceeded to play Calon Lan, Cwm Rhonda and the National Anthem.

It was really sweet and did bring a tear to my eye. The Argentine’s loved it and especially when I sang the anthem!!!

which formed part of the Central Chubut Railway which arrived in 1908 connecting Gaiman to Trelew and to Puerto Madryn. The tunnel was built in 1914 when the railway was extended. The museum I’ve just been too was once the station of the town.

On a stroll back I stumble across a bakery and spy my first welsh flag and of course can’t resist a photo opportunity.

I end up talking to the owner who isn’t of welsh descent himself but is proud that his son plays rugby and shares some photos with me. The people here do like to meet people from Wales it seems.

Waking up I have an extremely chilled morning, especially because my lovely host says I don’t have to check out at 10 as there’s no new guests coming. This is great as it means I can sort my stuff, go for afternoon tea at their tea house (none of which open until 1430) then get back to Trelew for my bus at 1700!

First things first and it’s breakfast and I’m greeted with more tea and welsh cakes. Not the healthiest start to the day but bloody lovely. A lot of people here say they sell Welsh cake or torta galesa but it isn’t. Their version is more like our Xmas cake. If you want proper welsh cakes then you need to come to Plas y Coed.

The only thing I have to do today is find the ATM to pay the hostel but when I find it, I can’t get any money. On speaking to the lady in the bank I learn that only locals can use it! Great….

I go for lunch at the Plas y Coed Tea House. 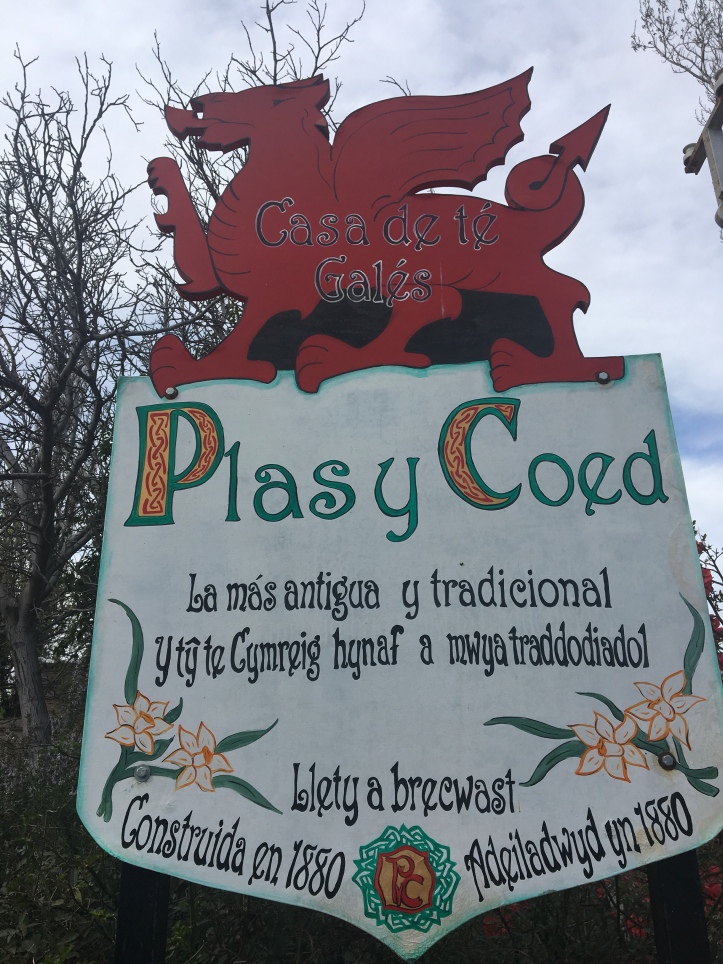 There are a few in the town but I felt I should go to this one especially as I was allowed a late checkout. It’s not afternoon tea as we now know it as there isn’t a sarnie in sight or a cup cake or clotted cream. It was however far too much to eat and did include a fair bit with dried fruit in that I don’t like – Xmas cake and bara brith

I’m also given a parting gift of more welsh cakes – that shd help see me through the 15 hour night bus I have coming up! 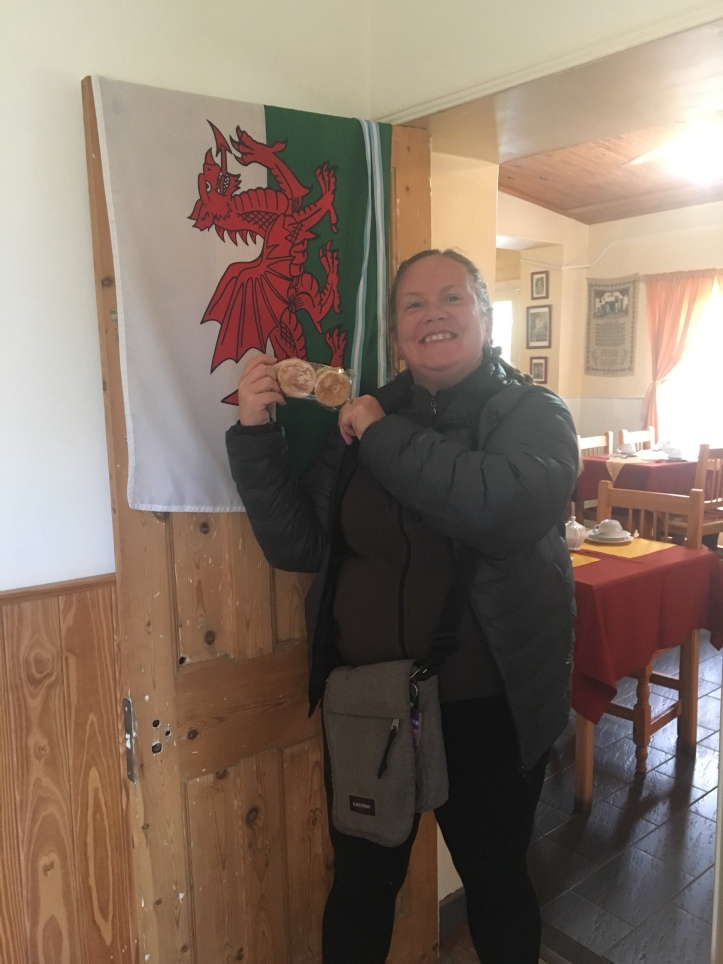 I enjoyed my time here but definitely more because of where I come from. It was great for a bit of downtime after a hectic few weeks but it was quite an expensive little visit.

My last flight as an EU citizen and probably my last with the EU burgundy passport as I need to renew! Hopefully I can still get an old one rather than a GB blue one 🤞🏻🙏🏻 11 months to try and keep a childhood dream alive of getting out of the UK to move to Europe.... I hope Orange continues to support its employees in the UK whilst we go through this next phase 🇪🇺❤️🇬🇧 #notmybrexit #itsasaddayforsomeofus
%d bloggers like this: