I couldn’t do the tour through my hostel as it was full so I had to find another company. I shopped around and whilst thinking expensive, Nordic Tours actually turned out to be the cheapest – and with a discount if laying in cash.

Being so close to the office, I go there to leave at 0630 and am strangely told not to take the front seat on the bus as I’m on my own and people won’t like it – WTF!!! Who gives a shit if they like it or not…doesn’t it normally go first come first serve…..

We then start the rounds of pick ups which takes nearly an hour which isn’t helped by a group of women not being ready! I can tell I’m o a different kind of clientele tour – we’re in the posh part of town and stop outside one 5* Hotel, a 5, then the Sheraton and so on….I don’t think I’m going to meet any other backpackers or solo travellers today and it’s definitely a bit alienating.

We make a comfort stop – a place set up for tourists selling artisanal goods. The people in my bus who all seem to hail from Buenos Aires love it but for someone who’s travelled this for 7 months, it’s just more of the same – same tacky shit, different country!

We drive north and pass through the village of Volcán which was almost completely destroyed by the floods and mudslides in Jan 2017.

We continue north and through the Quebrada (gorge) de Humahuaca which has some amazing scenery (not quite as impressive as the gorge 2 days ago though).

We pass through a police control checkpoint. We are close to the borders of both Chile and Bolivia and this is quite a strict one checking for cheaper electrical contraband from Chile and drugs from Bolivia. We pass no problem!

Our first proper stop and point of interest is Purmamarca famous for its mountain of 7 colours (like Peru yes but much smaller). Millions (and millions) of years ago, this place was under water and the colours come from the minerals that are in the rocks. For eg – red equals iron, purple – lead, yellow sulphate and so on.

We make a stop in this little town and it’s like being transported back to Bolivia or Peru. Being right next-door to Bolivia, it is the only area with a sizeable indigenous population in a country ethnically defined by European immigration. 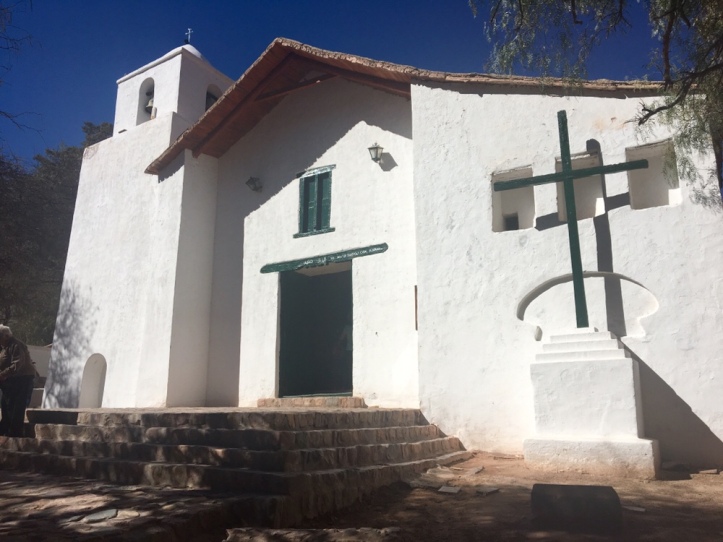 It is therefore obviously full of indigenous people selling their ‘real’ alpaca jumpers and everything else. The little town has a cute little church, a very d tree in front of it and of course, a main plaza. Stops are made here a to entice tourists to buy crafts but also the view of the Cerro. However, when back on the bus, 2 mins later we do make a stop for a better view and photo opportunity. 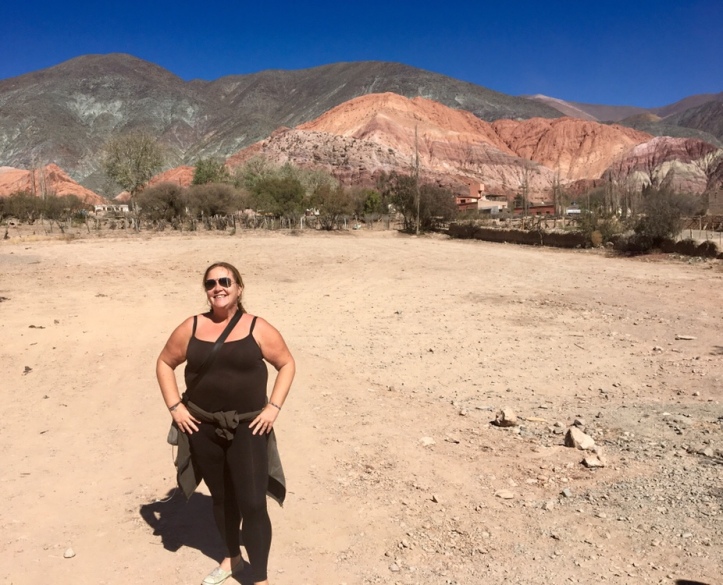 We continue along through the Quebrada and the scenery changes quite dramatically. We are now in more arid desert like land and the area are full of cacti.

It is said that these were once native legends and before dying they swore to protect Pachamama for eternity. These cacti can live for up to 600 years si not far off! The General of Independence- Pelgrano was fairly intelligent and resourceful. In his defence if the North, he incorporated the use of these cacti into his battle plans. He cut the cacti to human height, donned then in hats, ponchos and weapons. When the Spanish approached, they thought the cacti were an army and retreated. They soon dissed but it worked for a while!

Our next stop is Pucara which is a pre inca fortification.

The location was strategically chosen to be easily defensible and to provide good views over a long stretch of the Quebrada de Humahuaca.

The fortified town was originally built by the Omaguaca tribe, who settled in the area around the 12th century. In the late 15th century, the tribes of the Quebrada were finally conquered by the Incas under Tupac Inca Yupanqui, who used the pucará as a military outpost and to secure the supply of metals such as silver, zinc and copper which were mined nearby.

The site has been restored and a memorial set up to those that did.

I have some fun with the cacti plants here!

Our guide tells us that Tilcara was where the Argentine team came to train to acclimatise for the 1986 World Cup in Mexico. They said if they won they would return to thank Pachamama. They win and and they didn’t and haven’t won since! This year, they returned to try and make peace with Pachamama before this year’s World Cup but she was obviously still in a puss with them as they didn’t do too well!

In the distance at one point you can see a zig zag route up through the mountains. This was one of the many strategic inca trails in the region that linked Jujuy to Mendoza through the gorge.

Another stop and here is just another tourist trap. I can’t be arsed and sit in the sun but the rest are shown some guy making some pottery stuff and the obligatory shop afterwards!

Then it’s finally on to Humahuaca, one of the main attractions of the tour. Whilst the majority of the group go for the planned lunch stop and subsequent tour, I decide to do my own thing. Wandering around, you can see the draw of this place – a small protected unspoiled indigenous town. One of the main features is the church but this one has a famous click tower where at 12 pm people gather to see a little figure of San Francisco appear. I wasn’t here for this.

The other main attraction is the massive monument on the hill that was built to pay homage to the Northern Argentinian Army, the indigenous community and tbe guacho militia that fought a total of 14 battles in Humahuaca during National Independence War. The Monument made up of 70 tons of bronze represents the image of native chasqui Pedro Socompa that transmits the news of freedom( even though some people from the region say that the image of the protagonist belongs to Diego Viltipoco, an Omaguaca Indian Chief who helped Belgrano in the Independence Fight.

One of the most interesting and fun parts of the day was nothing to do with the tour and something I stumble across myself. Being August and the month of Pachamama – a lot of offerings are being made ready for September and the start of spring. They want a good season and successful harvests. As I stand, watch and ask questions, I’m asked if I’d like to participate and make an offering too. I learned a lot in Peru and find all this fascinating. Having done a group one in Peru and done some with V in Uyuni, I’m keen to do one with these guys. There’s a lot of offerings going on and with a lot o my mind for my future, I’m hoping good old Pachamama can help shine a light in some way!

I kneel down in front of the hole in the ground next to some guy and a blanket is draped over our shoulders – I’m hoping this isn’t some kind of secret wedding ceremony! After washing our hands, together we pour into the ground a variety of alcoholic beverages for Pachamama including red and white wine, light and dark beer and some other liquids. 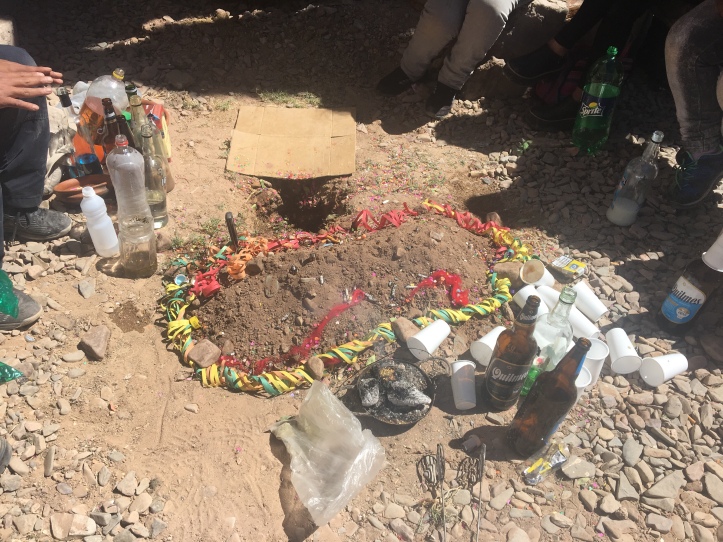 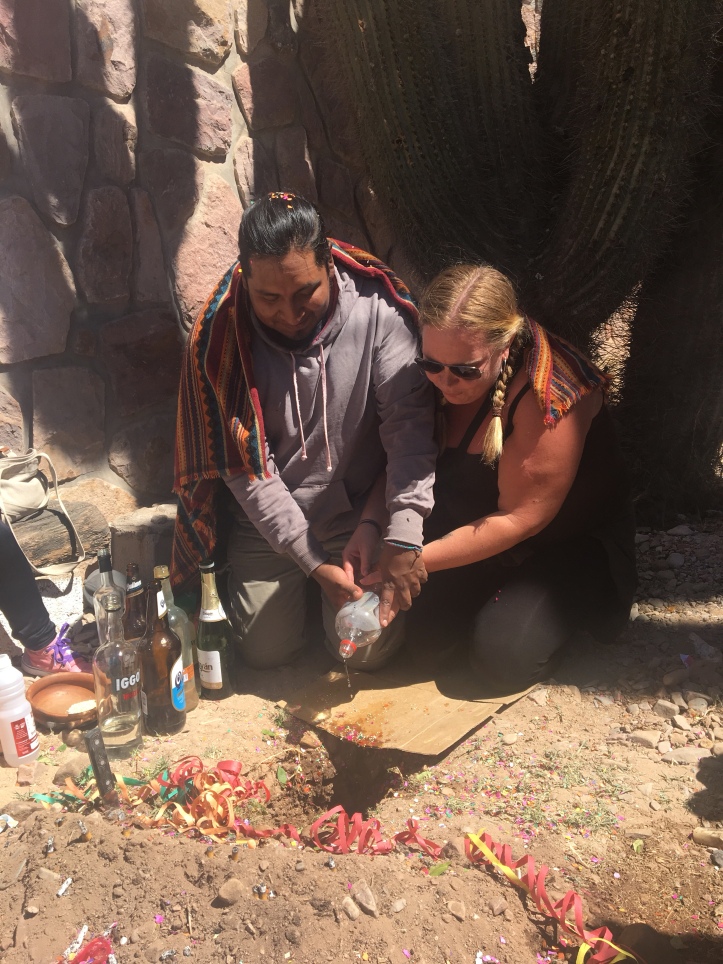 We also add coca leaves, seeds of some kind and confetti. Next up is our turn to drink these beverages 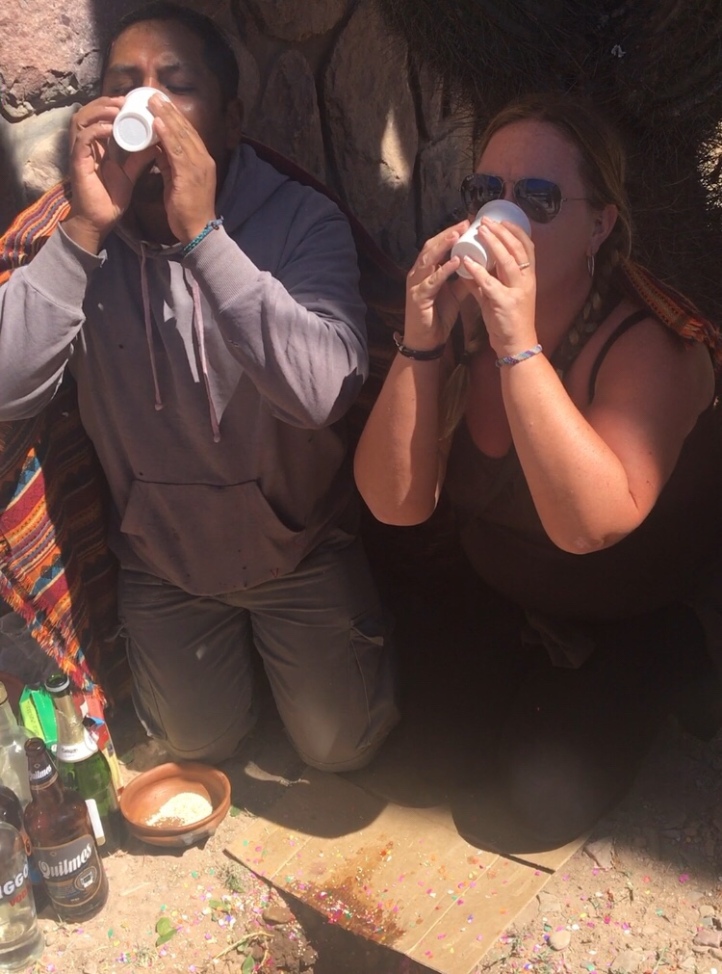 I get given some seeds to pocket for wealth and confetti on my head for happiness.

Here’s to u Pachamama and I have my fingers crossed!

After 2 hours here, it’s back on the bus to head back. We make a stop at San Francisco Church. We can’t take any photos but this is famous for the paintings inside. The incas were asked to paint pictures of the angels. They said they didn’t know what they looked like so couldn’t. The Spanish army said they looked just like them but with wings. The Incan artists painted exactly that and in the church are 9 paintings of Spanish army men, dressed in all the finery with weapons and guns – with wings!!!

The next stop is the monument at the Tropic of Capricorn.

It is the circle of latitude that contains the sub solar point on the December (or southern) solstice. This again was another particularly important time for the incas and local people still celebrate Inti Raymi and solstices here today.

Our last stop is what’s called Painter’s Palette – a mountain of colours like a painter’s palette.

We passed by this morning but we stop now as the lighting is better in the afternoon. In the forefront is the High Cemetry – believed to be there for beliefs of being higher to god or the other opinion is so that decaying bodies didn’t contaminate the water wells below….

Tour complete, it’s back on the bus for the 2 or so hours back to Salta. An interesting day with some beautiful scenery but a few too many tourist shop stops for me. We get back at about 2030 after a long 14 hour day.