With wanting to go back to the same lunch spot as yesterday, I have a quiet morning packing and getting ready to leave my hostel in Santiago. One of the best things about here is the WiFi speed and I can finally upload all my photos from the last 6 weeks or so to the cloud! The things you take for granted back home! Lunch doesn’t start for an hour so I grab a snack and in an effort to not get another extortionate taxi, make my way to the bus station Alameda via the metro. Is actually easy enough…and a fraction of the cost. The bus is only 3000clp too.

It’s only 2 hours to Valparaíso and that’s all it actually takes – surprising for South America but it does seem to be far more efficient here. Maps Me tells me my hostel is only 20 mins away so I opt to walk. After being in Santiago for only 4-5 days, it’s strange how quick I acclimatised back to a more western world. Being in Valparaiso with its edginess and street vendors and homeless etc comes as a stark reminder im still in South America.

My hostel isn’t that great and a bit further out but Alegre and Concepcion were just too dear. It’s only a 15 minute walk though and I have got a private! I decide that I’ll make my own breakfast and dinner here and after a trip to the supermarket, treat myself to the dinner of champions, a good old British feast of jacket potato and cheese – the beans are going to have to wait until I come home!

Wednesday and I’ve signed up to 2 walking tours. We meet in Plaza Sotomayor.

Im the only person in the English speaking group for a while until 2 Italians join on.

First stop is Calle Serrano. In a city built up on over 40 cerros (hills), this was the first flat street ever built. The red line down the street indicates where the sea once used to come.

1848 – 1914 was something of a golden age for this area. There was mass immigration as part of the gold rush but more than that was the strategic importance of Valparaiso itself. It was the first port you came to on the Pacific meaning people from far and wide came here. Many stayed, including many Europeans (specifically British and German) but many made their way up north to the land of hopes and dreams in the States.

The city suffered a devastating earthquake and tsunami in 1906. This led to a big depression and reconstruction was slow. Due to this and the risk of it happening again, many people fled the area to neighbouring Viña del Mar, Santiago or further. This was the more wealthy people of the city and caused more economic strife.

The final nail in the coffin and the end of the golden era for Valparaiso was the opening of the Panama Canal in 1914. This meant the city lost its strategic base and everyone now went through the new route. The busy port that once was, was no more.

Despite the mass migration, the majority of the working class population remained. It is known as a working class city (the differences between here and Santiago are quite noticeable).

Plaza Echlaurren is one of the cities main squares. The church here is quite basic looking – nothing like the others in other cities but this is as a result of it having been rebuilt 4 times due to earthquake damage. The central market is also closed due to reconstruction work being carried out following the 2010 earthquake.

We catch bus 612 that gives a good tour through the winding roads through the different cerros. We stop at Cerro Carcel named so because of the prison that was housed here. From the viewpoint here, you can see out to the wealthier areas of the region – Viña del Mar and Con Con.

The prison was built in 1907 after the earthquake of 1906. During the dictatorship years it was massively overcrowded housing over 2000 ‘criminals’.

Salvador Allende was the first socialist democratically elected president in 1970. The US following the Cold War, didn’t want another communist uprising and so it is said that the USA and the CIA were heavily involved in funding the military coup’s activities and ultimately the bombing of La Palacio de Moneda in 1973. This led to the death of Allende and Pinochet, one of the Coup’s leaders claiming power and presidency of the country. Chile lived through 17 years of hell during his dictatorship.

Many of the politicians, journalists etc imprisoned during this era for speaking out and campaigning against Pinochet were released in 1990 when the country became a democracy. In 1999 the prison closed and in 2007 it became the Cultural Centre. It’s now used as a big centre to practice arts, music etc.

Graffiti is a huge part of the city and started after one of the many earthquakes.

Famous poet Pablo Naruda brought in Mexican artists to paint Chilean history in the streets. During Allende’s term, not having much money for campaigns, he used graffiti artists to promote and spread his messages to the people.

We walk down past the cemeteries. There are 2, one for catholics and one for non catholics. A bit further down the hill is an artistic square known as Resting Square. The funeral procession used to use this as a resting spot on the way up the Cerro to the cemetery.

It’s then back into the town to finish the tour. After a quick lunch, it’s time for the second of today’s walking tours.

We start again in the Main Square then move across to the port area. We are told about the War of the Pacific where Chile nurture rich land from Bolivia. It’s weird hearing it from the Chilean perspective when Bolivia has lost so much as a result of this.

This tour focuses more on the nicer areas of the city – Cerro Alegro and Cerro Concepcion. These areas were mainly occupied by Brits and Germans. Tired of walking up the hills, the first funicular was built in 1902 and named after the then current British monarch – Queen Victoria.

William Bitman was the first Brit to come to Valparaiso and built his house in Cerro Alegre. This started a trend that many others followed. 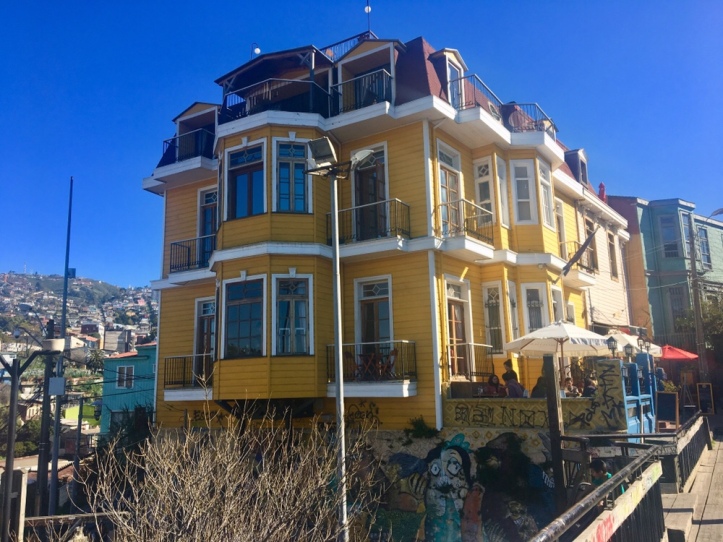 Valparaíso is a colourful town, full of houses in a multitude of colours. This is because many of the houses are made out of the metal of the old cargo containers. To prevent rust, they used the same paint as used on boats – hence the colourful array in the city and sprawling up the hilltops. 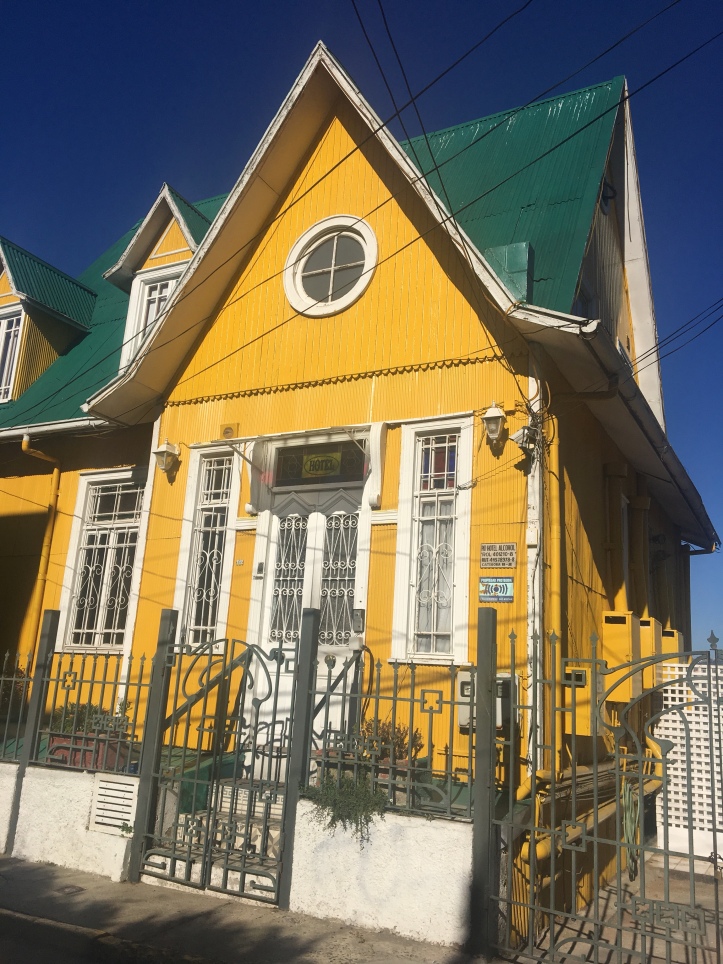 One of the main reasons why Valparaiso was given this status, is its historical value. During the 19th and 20th centuries, Valparaíso was one of the most important harbours of the South Pacific, promoting the growth of South American trade beyond its boundaries. Today, it can be considered as a testimony of the beginnings of globalization.

Thursday morning and I take a stroll up Cerro Bellavista to look at some of the street art that Valparaiso is famous for. 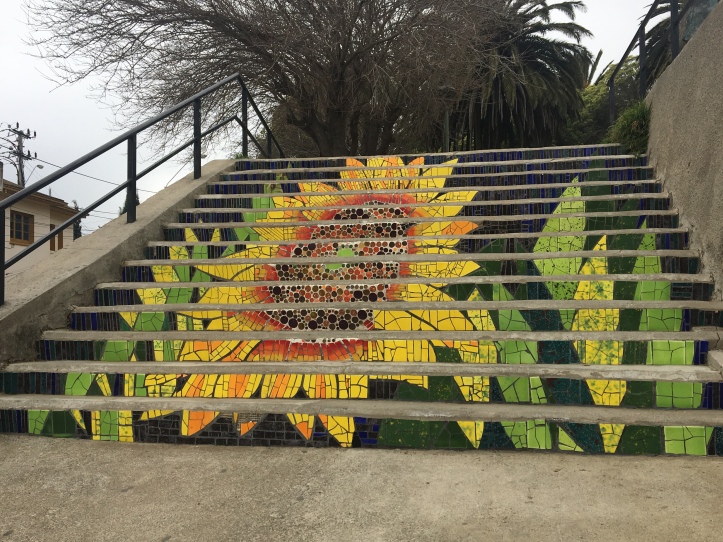 At the top of this hill is La Sebastiana – one of the houses of the famous Chilean poet – Pablo Neruda. As I’m here I go in but it is quite expensive at 7000clp.

It was in this city looking into the Pacific Ocean that, feeling tired of the noise of Santiago, Neruda found a house structure located on Mount Florida with an endless view of the sea, where he could he could “live and write in peace”. 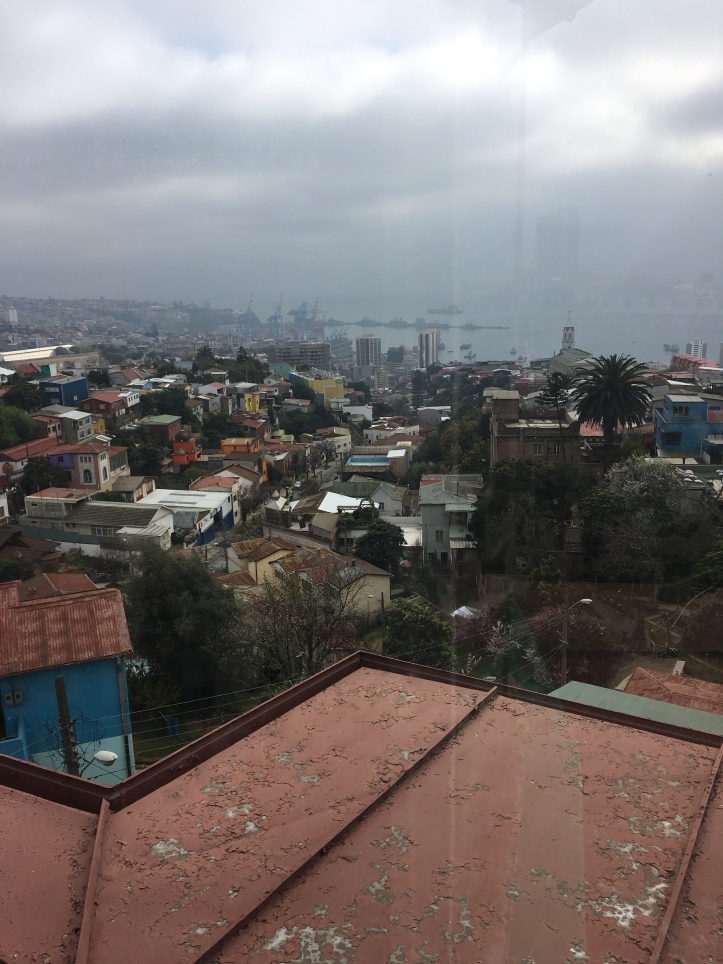 He called the house La Sebastiana in honor to its builder, Sebastián Collado, a Spaniard who after searching for a place from where he could have an entire view of Valparaíso, began to build this house with the purpose of living there when his children got married but sadly Sebastián passed away and never got the chance. Neruda learned of the house via another poet friend and finished off the work in the style Sebastien had planned.

Neruda was so greatly inspired by his dwelling that he penned a poem in her honor “I established the house. First I made it from air. Then I hung the flag in the air and left it hanging from the sky, from the star from clarity and from darkness…”

The afternoon takes me to Viña del Mar and another walking tour. We meet at the famous Flower Clock which was donated by Sweden in 1962.

Viña del Mar has a totally different feel and you can immediately see people have more money here. The houses are beautiful, there are nice green park areas and it’s has a lovely coastline. Cerro Castillo is evidence of this with some beautiful houses.

It is also the playground of the people from Santiago. Being no more than 2 hours away, many come visit for the weekend and especially in summer.

VdM used to be called the 7 sisters as it was made up of 7 cerros but was removed to make way for the new road and the name was changed.

Next stop is the beautiful Presidential Palace which was built in 1929.

It has 3 uses – it is used as the President’s summer house, the change of command happens here and any big events or important dinners with visitors are all held here.

From a little park we look down o we Brunette castle. This is now under police control and is now a very expensive hotel and restaurant. It’s half French and half Arabic. All bricks were brought over from France.

The last stop is the amphitheatre which is a big concert venue here and holds the famous Monster concert.

Friday before leaving I go to Cerro Concepcion and treat myself to lunch at the famous Fauna restaurant.

As I wander I find a bar with a Welsh flag and called Brecon’s! I find out the owner spent some time in the Brecon Beacons during his time in the Chilean Army and named his bar after it!