Today is an uber early start with a supposed pick up time of 0500 for yet another tour. I’m tired and still marginally pissed off from yesterday! My mood is further agitated by it now being 0600 and I haven’t yet been picked up. The night receptionist rings the agency and they try to cover it up by saying there were van issues. Basically – the guide forgot to collect me. 10 mins later the owner of the agency who has been disturbed from his sleep over this issue, comes to collect me in his jeep. He’s not a happy bunny and really pissed off with the guide. He tells me he’ll come back to my hostel later with an offer of some compensation…

We race along some roads to catch up with the bus that hasn’t collected me. In the end thou, as there’s a bus in front of us and after a few phone calls, I end up joining a tour from another agency and jumping on the bus in front which turns out a Spanish tour.

It’s hard to believe I’m in the desert, only about 100kms from San Pedro and I’m surrounded by snow covered mountains and landscape. After about one and a half hours we arrive and it’s bloody freezing. The guide tells us it’s minus 6!

Geez I hate the cold….why did I come here in winter! I’m again up at altitude (around 4320m asl) and can feel it (bloated again).

I’m here at the El Tatio geysers which means grandfather or oven in Kunza. These are the third biggest geysers in the world – Yellowstone in the States has the biggest with Dolina Geiserov in Russia with the second.

Even thou it’s a national park, a company owns and manages the site. They use the entrance to maintain the area, have provided toilets and following some accidents in the past, have created walkways and viewing areas around the geysers.

Geysers occur when cold underground rivers hit hot rocks, heating and projecting the water up to the surface. 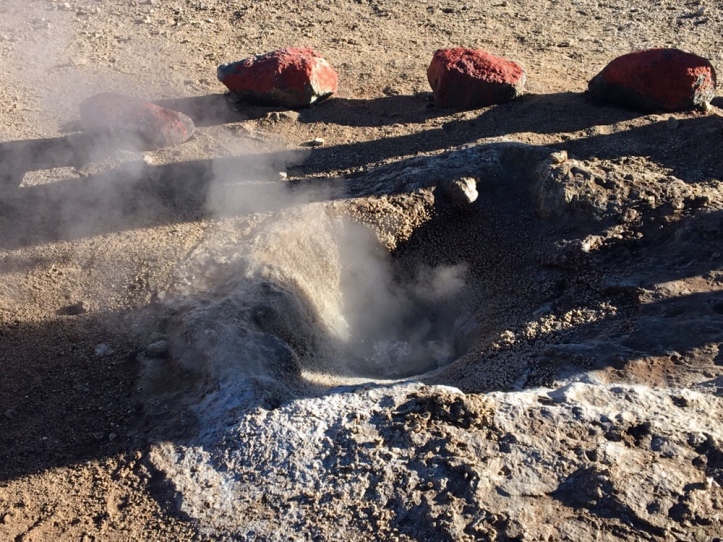 The water temperature ranges from between 25-100 degrees. They start as far as 3km down and water in some of the biggest can shoot up as high as 20km. There hundreds of geysers and fumaroles that span over 30sq kms. 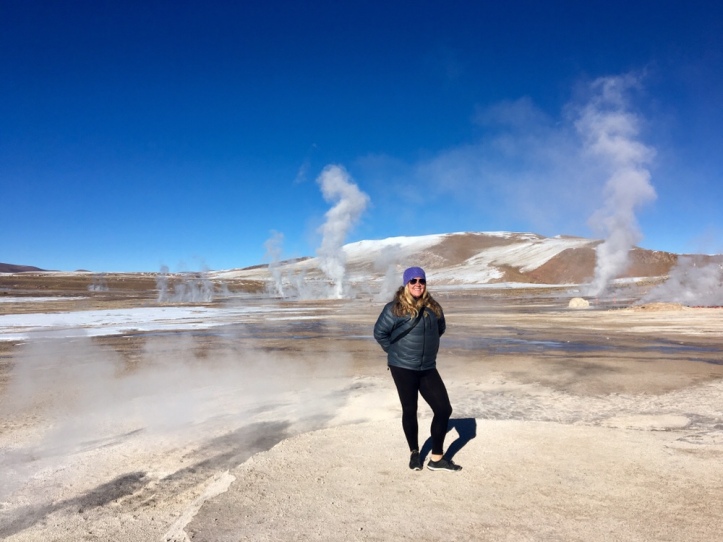 They seem to operate like a jacuzzi….a few minutes on and a few off. Usually a minute or 2 between eruptions. 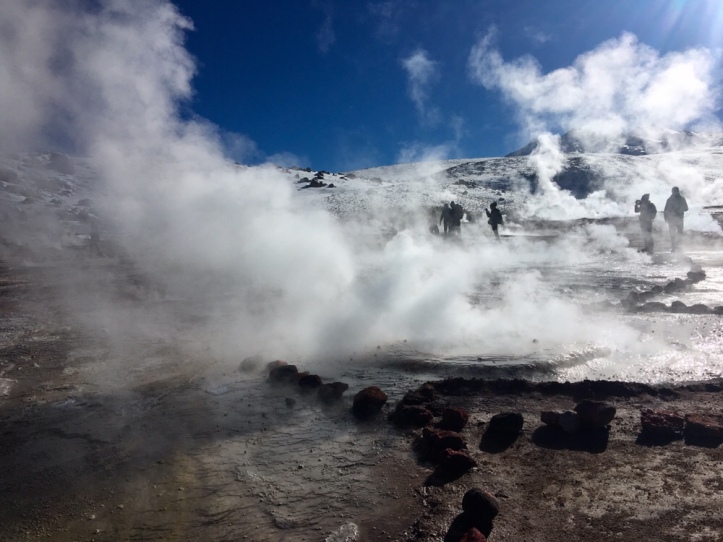 The tours start so early because the activity of the geysers is better in the morning. It’s an eerie like atmosphere as silhouettes of people in big coats and bobble hats are created by the steam and rising sun.

Once the 30 minute walk is done, it’s back to the bus for another alfresco breakfast. It’s nice as a couple I met from Spain yesterday are on this tour too so I can chat away to them.

The next stop is to the neighbouring thermal baths.

Most decide not to in on the basis that’s it’s just too bloody cold outside to change into swimmers and this includes me. I’ve had far too many colds this trip and don’t fancy another. There’s a little walking loop you can do instead – there isn’t a great deal to see but it kills some time. Those brave enough to go in are only given 20 mins anyway but it’s probably plenty.

We make a few photo stops on the way back especially for some alpacas. I must remember that this might be the first time seeing them for some people but you do become a bit blasé about some things when it’s the 100th time you’ve seen and heard the same thing.

We make a stop at a lake with a stunning volcano in the background.

Again it’s so weird being in the desert, sun burning brightly and snow all around! 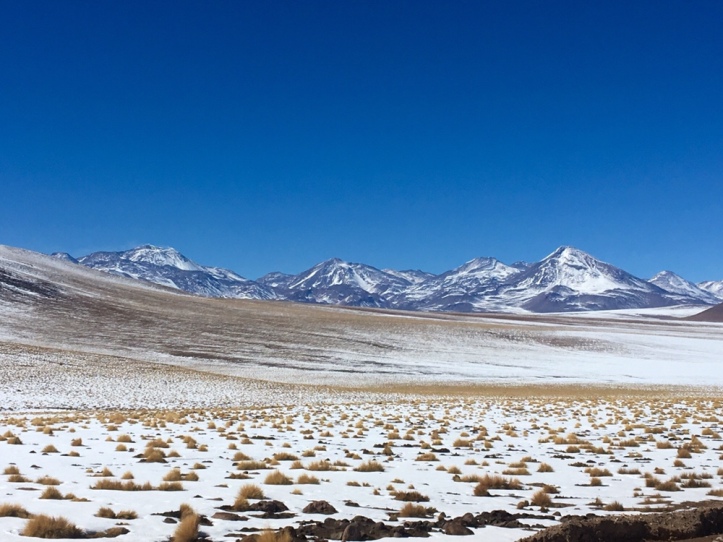 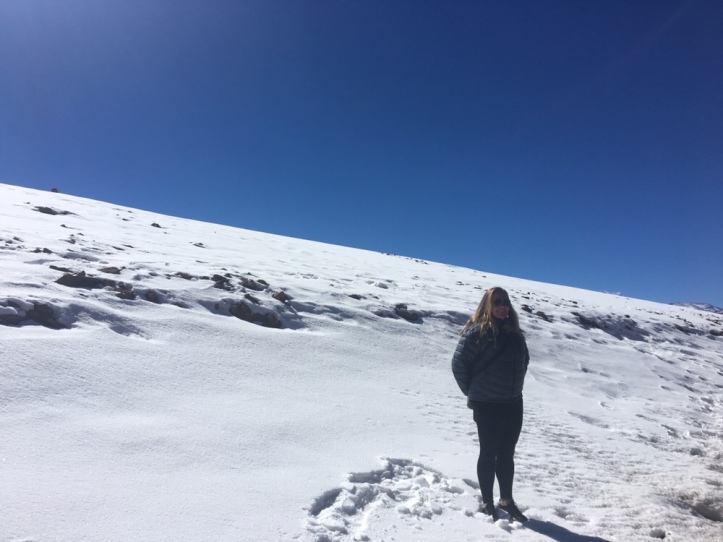 There’s a few other little stops before arriving back in San Pedro in time for a late lunch.

A great little find is vegetarian restaurant Estrella Negra who do a fab menu del dia for ‘only’ 5000cp (about £6). It’s one of the cheapest places to eat around here. I’m still quite shocked at how expensive this place is!

Back at the hostel and it’s time to pack..I have an early departure tomorrow. Tonight the hostel are doing a Taco night so I sign up to that, and while away the evening drinking wine with some fellow backpackers – most of whom for once are actually from the UK.