I have a bit of a lie in today as it’s check out day and I’ve a lot of hours to kill until half 7 this evening! As today is the official Día de La Paz, it’s a bank holiday and most places will be closed. This includes the famous vegan restaurant Ali Pacha that I really wanted to try but have missed out on that one.

I go to Higher Ground café got some breakfast and am treated to proper english breakfast tea and not quite Marmite on toast but the next best thing – Vegemite! Ah man…that’s the best breakfast I’ve had! Think I’ll add Marmite to the list of things I miss! I catch up on a few admin things here – the WiFi is good and bid farewell to Marcus.

I now have time to go visit Valle de la Luna. On blogs that I’ve read, a lot mention getting the cable car from Zona Sur, then walking to 8th Street and then getting a bus but the truth is, it’s far more simpler than than and u can just get on a bus from the Main Street, San Francisco square side. You get a bus to Mallasa for only 2.5b and get off outside the entrance – easy! It takes about 20-30 mins.

There are a few little tourist snack vendors around the entrance and it costs 15b to get in.

It appears that parts of a Star Wars film was made here due to a big model of some spaceship at the entrance!

On Googling this I’m not 100% sure if I am right with this or whether it was just something set up for the night of San Juan. Either way – a perfect setting for the next Star Wars movie!

When you enter there are 2 walk you can do – a 15 minute or a 45 minute. Arrows point the way and as there’s no point only doing the 15 minute walk, I set off in the direction of the longer one.

Moon Valley is a cool place yet rather an oddity in a city full of lunar landscapes and geological formations. It’s a maze of rocky canyons and spires, looking like stalagmites but actually composed mainly of clay and sandstone which were created by the persistent erosion of the mountains by the area’s strong winds and rains. 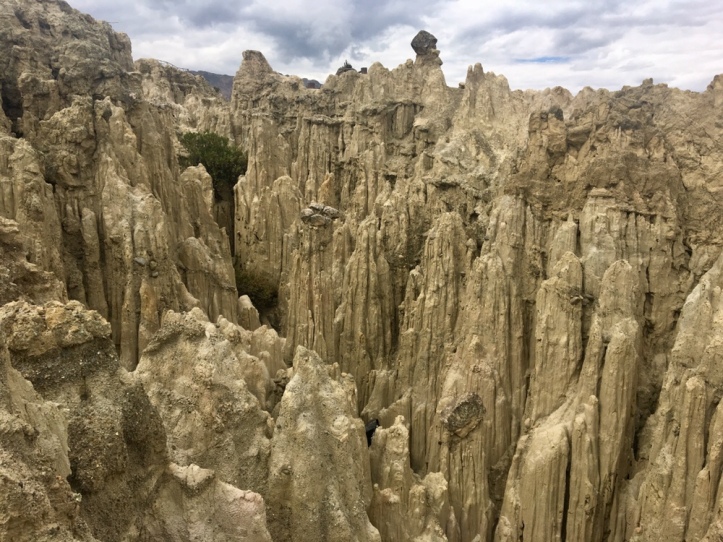 Like many mountains surrounding the area of La Paz, the rock formations contain lots of different mineral contents which create a colourful palette across the landscape.

According to local guides, Valle de la Luna received its name after Neil Armstrong apparently visited the site and remarked how the landscape resembled that of the moon. The jury’s still out as to whether this is fact or fiction…!!!

Despite the rocky formations that I’m here to see, one thing I’m closer to that jumps out in the distance is the Devils Molar – that’s on the list for next time!

I follow the path round, taking in the views and the rocks. It takes about the said time. There’s nothing else to do there so leave to get the bus back. Buses outside the entrance are all full which I had read so I walk the 10 minutes into the town of Mallasa and catch a bus back from there.

I go for a late lunch at Café del Mundo. I’m on a night bus to Sucre and have to while away a few hours…here is warm, has plug points and WiFi!