Death Road, El Camino de Muerte or by it’s proper name North Yungas Road was cut into the side of the Cordillera Oriental Mountain chain in the 1930s by Paraguayan prisoners during the Chaco War. The winding road stretches 69kms from La Paz to Coroico, connecting the Amazonian rain-forest to the capital city.

In 1995 the Inter-American Development Bank named it the most dangerous road in the world. Buses, trucks and cars full of people and produce used this road, often overtaking each other in 3m hairpin bends resulting in many motorists and their contents plummeting to their death. It is estimated that 200-300 people were killed yearly on this stretch of road. At many (too many) places on the side of Death Road, there are an alarming number of crosses marking some of the many spots where people lost their lives 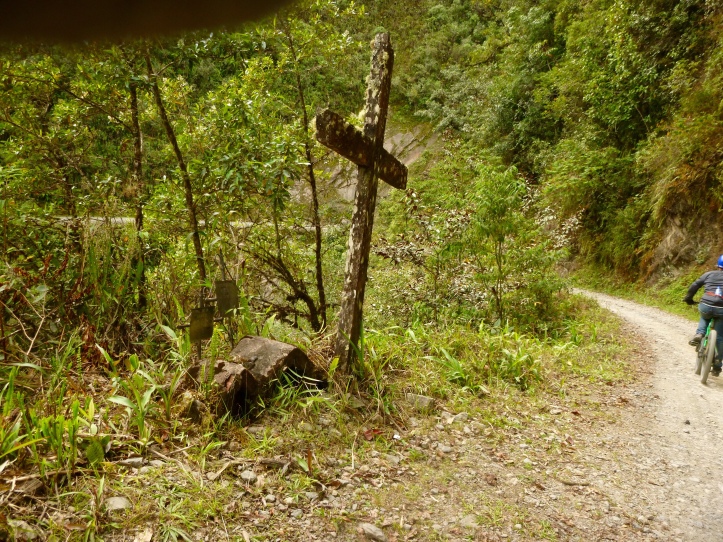 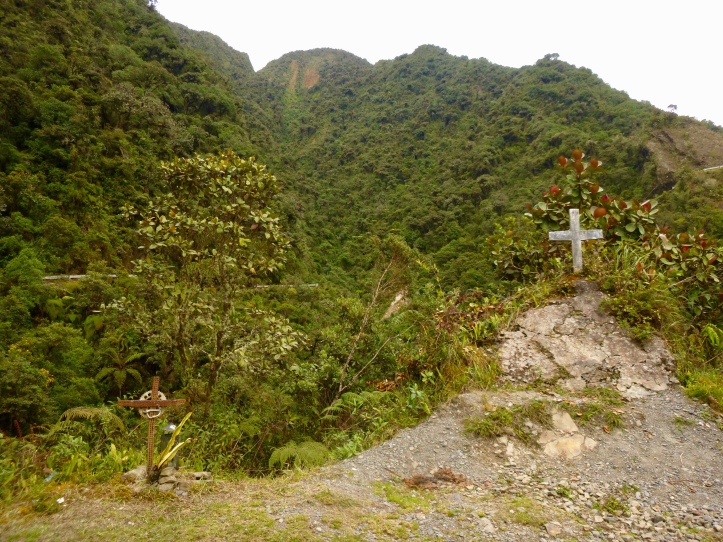 After 20 years hard work, a new dual lane asphalt road was opened in 2009 and now all traffic is diverted via this route – although a few do still use it.

A lot of people in the UK are aware of this road as it featured in an episode of Top Gear where they drove second-hand off road vehicles down the treacherous camino.

Despite knowing all this, it’s one of those things that as I’m here I just have to do! And, I’ve roped my local friend and her husband in to joining me!

Through a friend of a friend who I met the other day, he suggested 2 companies to me – Gravity (who he used to work for) who are the best but most expensive at 849$ and Barracuda who come in around the 500$ mark. Other companies can then come in about 100$ cheaper – but maybe you need to ask why?!?!

I decided that as Marcus knows his stuff, to go with his suggestion and use Gravity. Especially considering how nervous I am and also to be cycling down a road named such as this – I didn’t want to be taking any chances with any second rate company!

Saturday morning arrives and our meeting point is Café del Mundo where I go early to get some breakkie. Biking tour aside – this is a fabulous café with a great menu.

I meet my guide Kirsten from Belgium and then Babisa, her husband Guille and daughter Sofi arrive. Luckily it’s just us in our group maybe because Babisa booked it and they think we’re all Spanish…

The other group is full of tourists and about 14 of them.

We leave around half 7 for the hours bus journey to El Cumbre – 4650m asl.

Once off the bus we’re all kitted out. Not just gloves and helmet but protective outter wear and a gift buff. Our bikes are set up, we have a safety briefing then we cycle round the car park to get used to them. They’re actually very good bikes, in great condition…good tyre tread and fabulous suspension.

then in keeping with the Aymara traditions, a bottle of potent alcohol is passed around…we each drop a bit on the floor for Pachamama, a drop on our tyre and then take a swig (which burned like hell) all the name of asking Pachamama to keep us safe 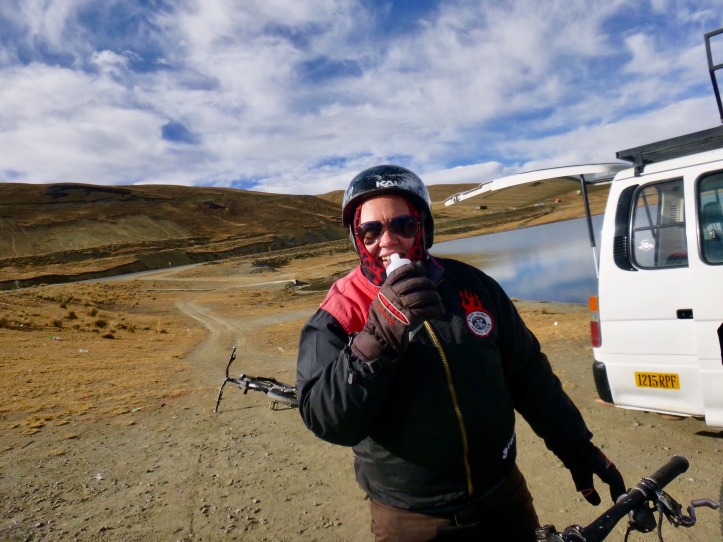 The first 20-30kms are on the new smooth stretch of road. It’s split into 4 sections and we set off with our 2 guides – one in the front who often shoots off ahead to get photos of us and the other behind. Our bus is always behind us following with Sofi in it.

Kirsten explains that at any point we can slip a section and jump on the bus – this of course will not be an option for me – unless I get injured of course! Both our guides emphasise the importance of going at a pace that it right for us (unlike the stories I’ve heard about other companies).

These first sections are great – road biking…much more my cup of tea. It’s smooth, downhill, fast and exhilarating. Even over taking the slow chugging huge trucks becomes fun! It’s a really good way to get used to the bike before the real death road part. 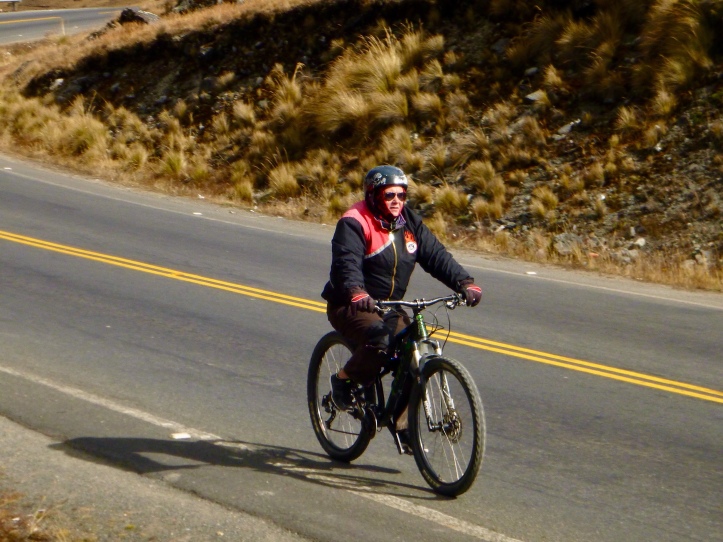 By our second or third stop we hear over the walkie talkie that a girl has come off in another group and smashed her face – just another stark reminder of how dangerous this can be!

We stop before a tunnel as we’re not allowed to cycle through it. Running alongside it is a rocky, gravelly path full of big stones….here we go! 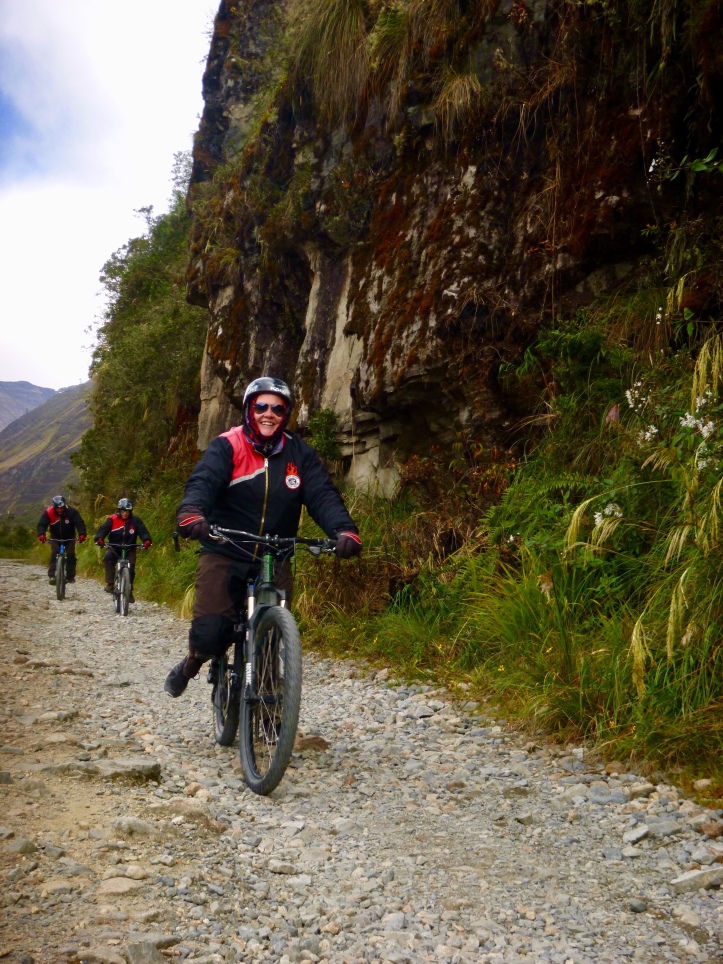 Nerves got the better of me and I didn’t like it. I worry too much about skidding and falling making my cycling too rigid for the terrain. I need to relax into it….

I am told that stone wise – that was probably the worst bit which I’m happy about.

Back on the road for the last part – and then we’re here!!! The start of Death Road…

We have another briefing and are explained the rules of the road – here we keep to the left…WTF….there’s up to 1000m foot drops and no railings!!!

This road is split into about 8 sections (it’s good to know), then we take a look at the road in the distance – Devil’s Tail! 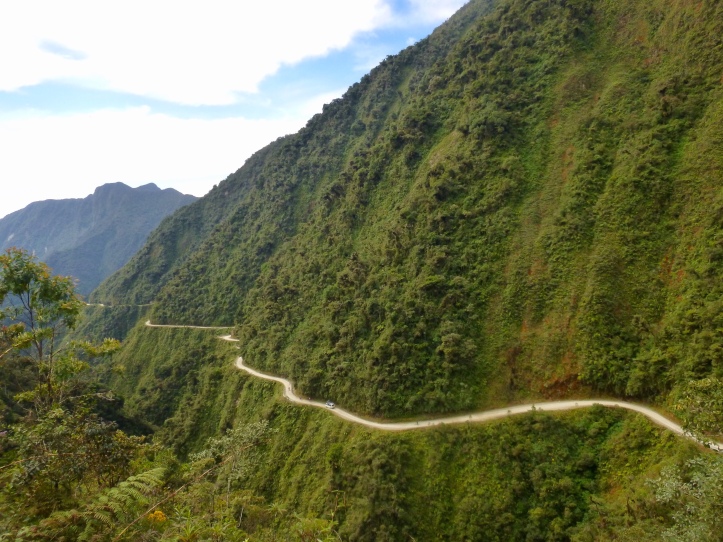 Oh god, what have I got myself into this time!!! We have a group photo then it’s time for the off…. 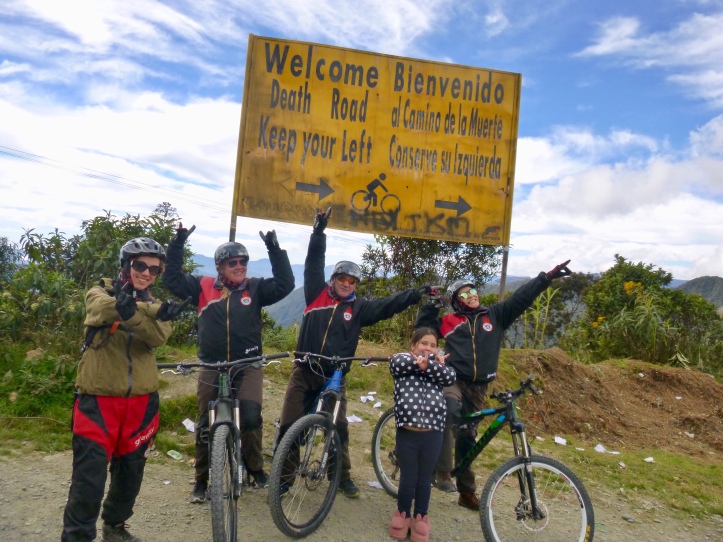 The road takes a bit of getting used to…quite narrow (but actually ok for a cyclist…better than being in a vehicle I think), full of hair pin bends, steep drops and gravelly tracks.

My adrenaline is pumping and I’m trying to enjoy it but I’m not quite there yet. We stop and have our photos done lying down over a cliff!

On to the next section and we stop and queue to face our photos done at the most iconic part. Google Death Road and a plethora of images in this position will come up andI’m chuffed to say I now have one (several) of these too! I think sitting over this cliff edge is actually the scariest bit so far! 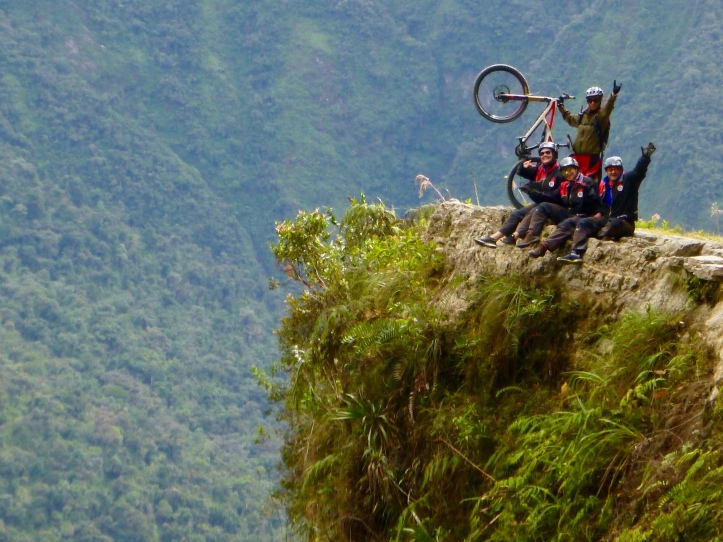 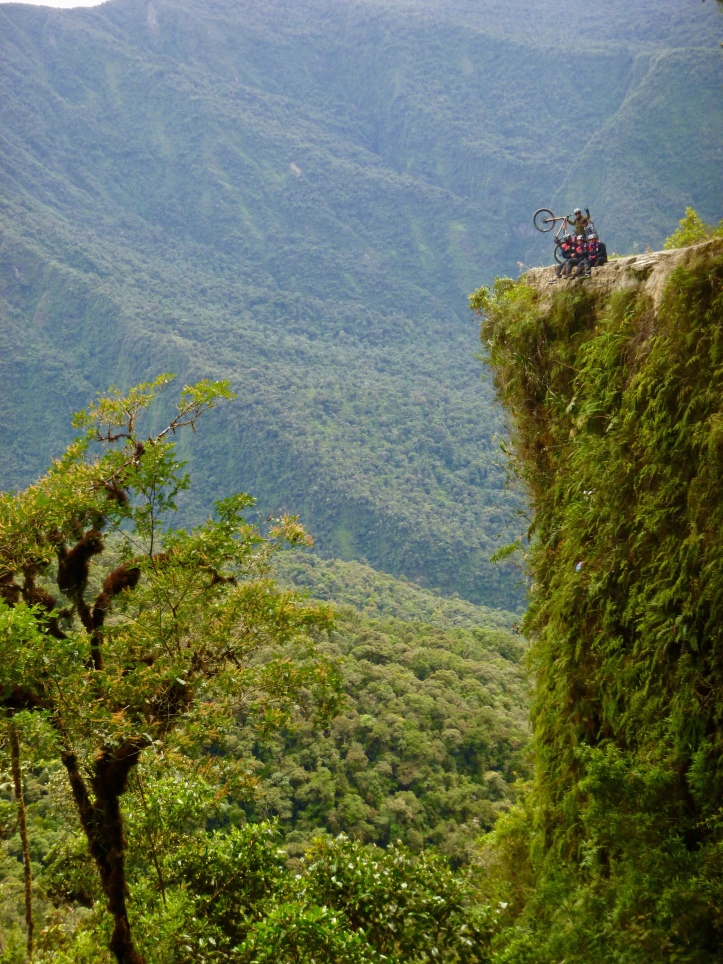 On we go and I’m starting to find my cycle legs and an actually enjoying it! But then on one section we are told that this bit claims most accidents so go steady. Yep, I’ll definitely be heeding that advice! 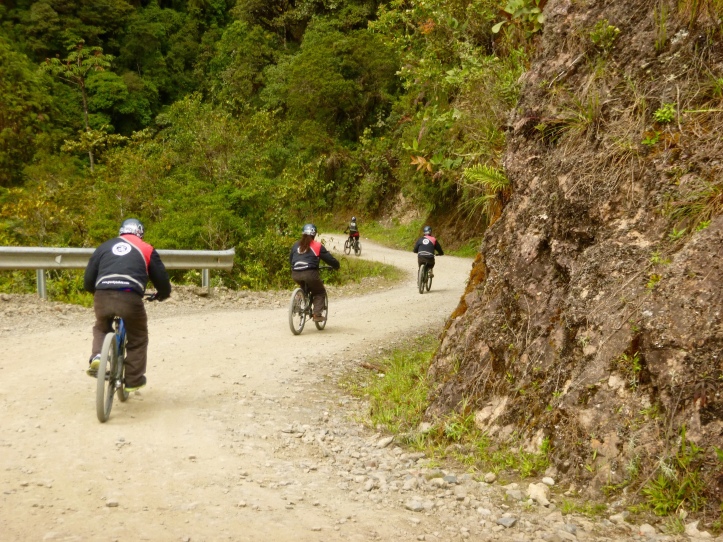 We have a welcome snack break and all is good apart from our hands. Omg they kill. Pressure from leaning forward going downhill, constantly squeezing the breaks and bumping over the terrain! I’m asked if I want to skip a section – not a bloody chance!

We carry on, through wet ground where we need to be careful of sliding, down a big steep hill (u can walk this bit if u prefer) but it was awesome…took my breath away! 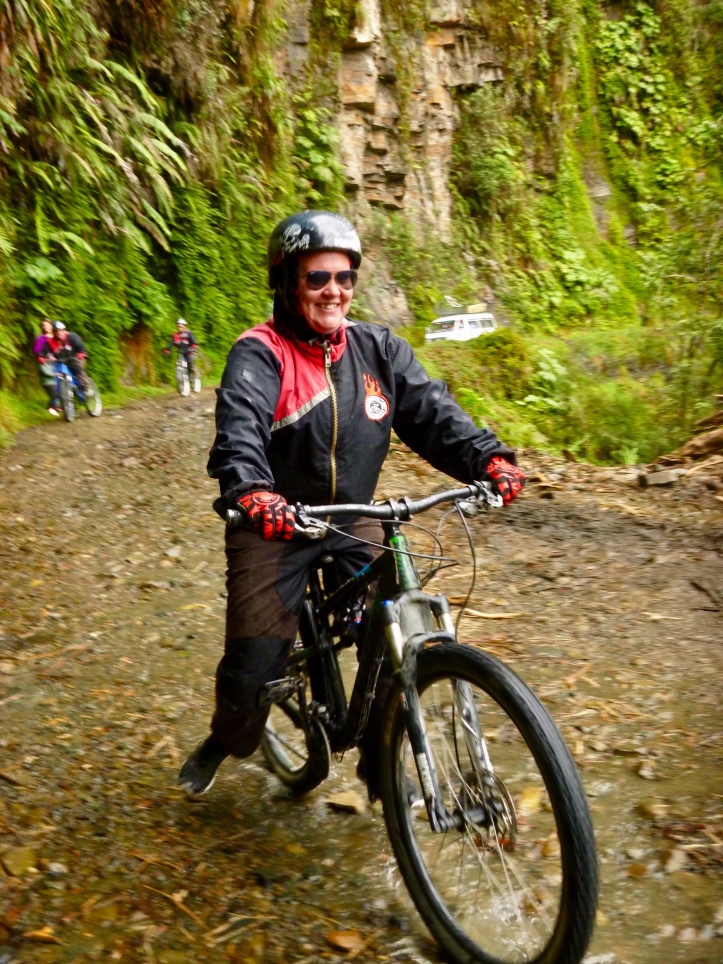 Then onto a flat section where we can actually pedal. I love this but and power through it. I’m on Kirsten’s tail then the challenge is on. I lose my nerve on the downhill bits thou and have to ease back!

We’re all really enjoying it, going at our own speed, passing by each other when our confidence builds.

There’s a toilet and drink stop and also where you have to pay your 50bs entry fee. It’s less for locals. This goes towards the maintaining of the road. Having worn so much at the start when it was freezing at 4650m, I really need to delayer. It’s much hotter further down. With only 2 sections left, we scoot off again knowing we’re nearly done. 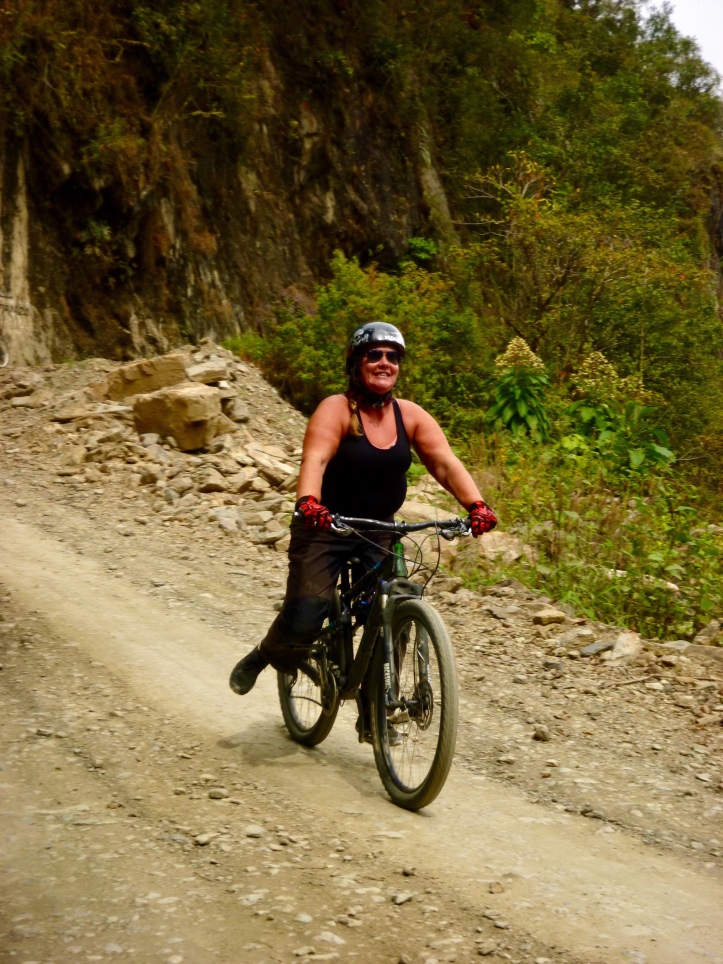 We ride through another stream which is cool and this one is much deeper so u get pretty wet.

That’s why Marcus told me I needed a change of clothes!

We arrive in a town and this is where you can go zip wiring if u choose. I did it not so long ago so don’t want to and luckily the others don’t either do we can crack on. It’s only another 10 mins from here and we’re done.

Woo Hoo….high fives and hugs all round. We did it!

We have our finishing photo taken 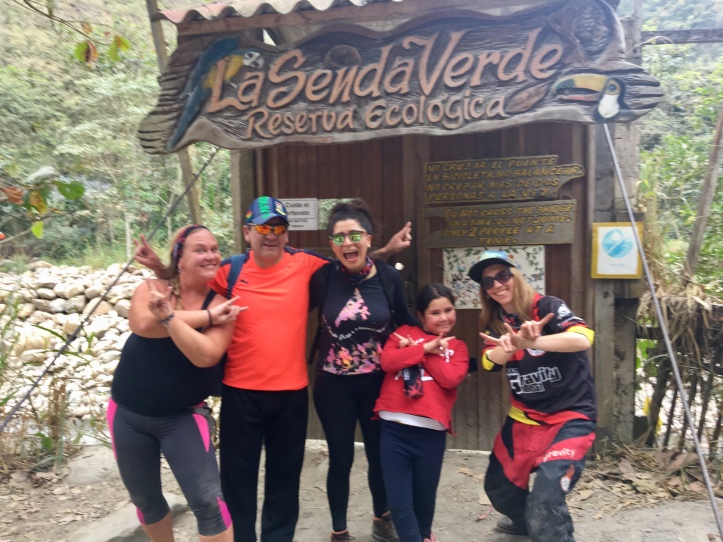 and lunch. This place is an animal sanctuary and quite a cool place – full of monkeys, capybaras etc. Having just been to the jungle I’m not fussed about doing a tour but Sofi who has been good as gold all day wants to go see the monkeys. Babisa takes her while I enjoy a nice hot shower – they even provide towels here! Babisa and I change into our freebie t-shirts and get some great photos! 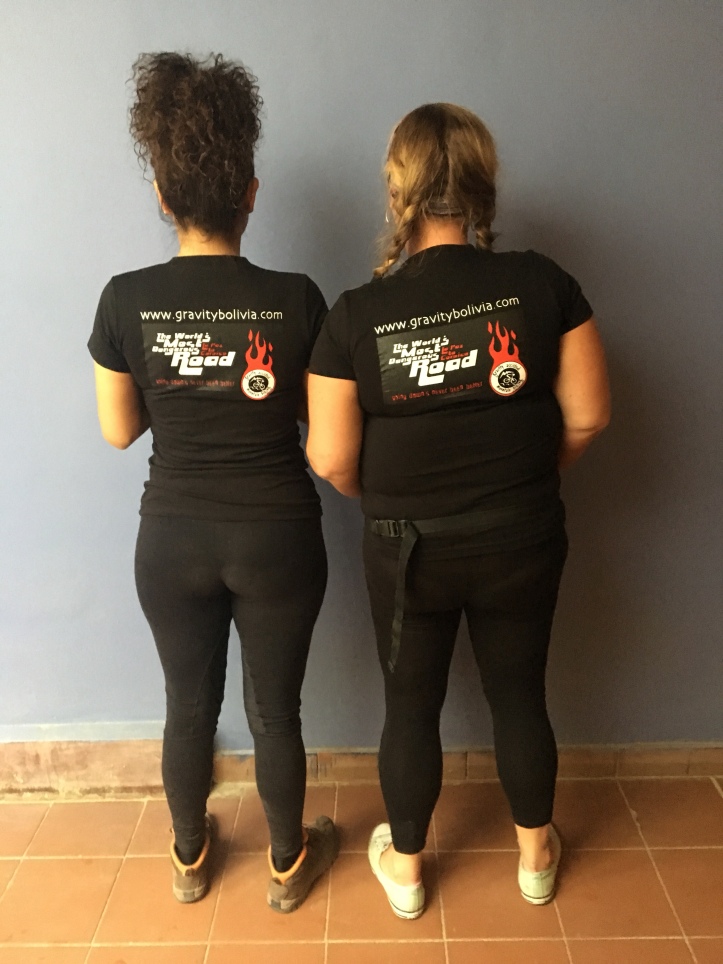 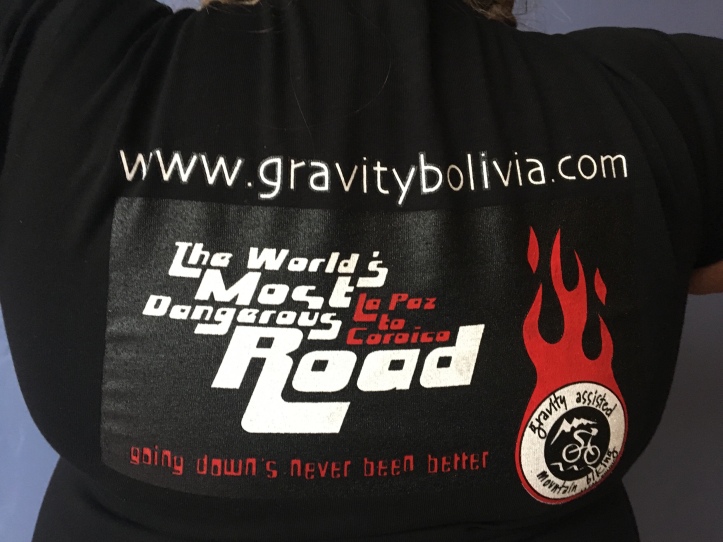 Now it’s time for the 3 hour journey back to La Paz. Chatting to Kirsten, we learn more about Gravity. They started the whole Death Road cycling phenomenon back in the 90s. They buy their bikes from the US and cost a few thousand. After 2 years they sell them off (apparently to Barracuda) and buy new. The bikes used one day are not the next and are checked over in the workshop.

The whole experience and service was exceptional. The guides were Kirsten and Fernanda were great – friendly, helpful and informative. The addition of having one of the guides take photos was fantastic and really captured the day – something we could not do bring in bikes. Even the driver who had Sofi in the bus with him was fantastic. I really can’t fault Gravity at all and it’s not hard to see why they are the highest ranked company for this tour.

So was it as scary as the all hype? It’s mainly a mental thing and all in your head. The ride itself really isn’t that bad. Yes, there are a few hairy moments and big drops but your so busy concentrating on where ur going, avoiding big stones etc that you don’t really take in the drops on ur left! I wouldn’t say it’s something a novice rider could do though – you do need good control and confidence in a bike.

I very nearly didn’t do this after not enjoying the bike ride down Cotopaxi in Ecuador but the weather was against us and the bikes were awful. Death Road and with Gravity – this was a totally different experience – another great achievement. I cycled Death Road – the most dangerous road in the world – and got the t-shirt!!! 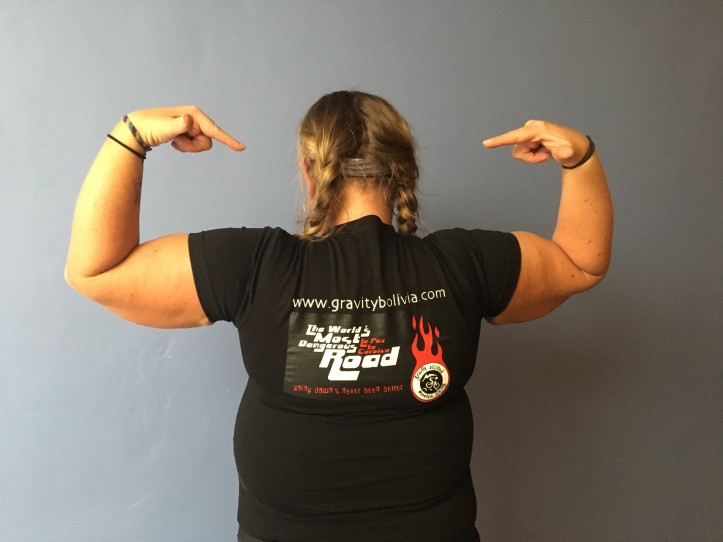 My last flight as an EU citizen and probably my last with the EU burgundy passport as I need to renew! Hopefully I can still get an old one rather than a GB blue one 🤞🏻🙏🏻 11 months to try and keep a childhood dream alive of getting out of the UK to move to Europe.... I hope Orange continues to support its employees in the UK whilst we go through this next phase 🇪🇺❤️🇬🇧 #notmybrexit #itsasaddayforsomeofus
%d bloggers like this: