The bus from Arequipa got me in around 10pm. Completely wiped out, it’s a taxi check in, book tour and bed! The next few days are going to be hectic.

My alarm goes at 6, and it’s breakfast and pick up at 0645. Today I’m in a tour to the Peru side of Lake Titicaca.

There are loads of people and loads of boats and it’s a bit chaotic wit people getting in then guides changing who is on what boat. Our boat is sorted and full of occupants and away we go.

Our guide Luis of Jumbo tours is very informative and quite funny. He shows us a map of the lake and gives an explanation…

The lake has 36 natural islands. Isla del Sol in Bolivia is the biggest with 5000 or so inhabitants and Amanti on the Peru side with around 4000.

We sail through the reeds known as tortora 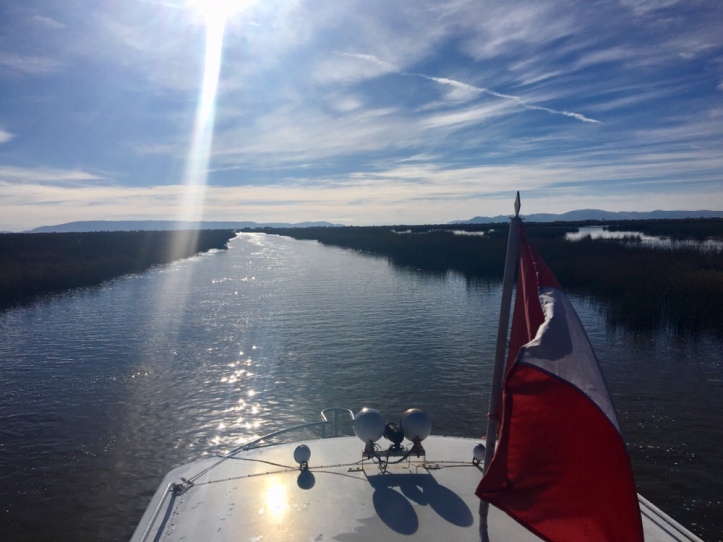 (which is very important to the locals as they build their islands, homes and boats out of it) to the entrance of Uros – the floating islands. They are quite a sight to see and more incredible to believe that people actually live on them.

All the boats pull up at a different island and we all get off to meet the families and have a look around. Walking on the reeds at first feels really strange, squidgy like and u wonder whether ur going to plunge into the lake!

We all take a seat and are given an explanation on the people and the islands.

The indigenous people here Aymara’s. They are of pre Inca period and speak their own language. As they have for generations, the Uros survive by fishing, bird hunting, and gathering bird eggs from the reed beds.

It is estimated that 1200 inhabitants live in around 60 of these floating islands. The purpose of these islands came as a defense mechanism to protect themselves from attack – mainly from the Collas and Incas and meant they could be moved quickly whenever need arose.

The islands and how they are made is quite extraordinary, especially considering how long ago they were they were first constructed. Using the root of the reed as the base of the island, which is over 2m thick, they cut it up into blocks and assemble about 10 together to make and island. They then weave the roots to make a firm and steady layer. They blocks are moored to the lake bed with rope and sticks. New reeds are laid twice a month but as they get wet and rot, some proper maintenance is required and reeds swapped out. Tourism exacerbates this but brings in a new steady income.

As we’re sat around, we’re told the white end of the root is edible. It’s passed around to try…whilst some seem to like it, to me it’s a nothing and bland. Other parts of the reed are used for medicinal purposes too – like splitting it open and putting on ur forehead for a fever.

The ladies go on for a hard sell showing and explaining all their wares and the hard work that goes into it. It’s all very nice and true, but after 5 months in this part of the world, also all very samey. 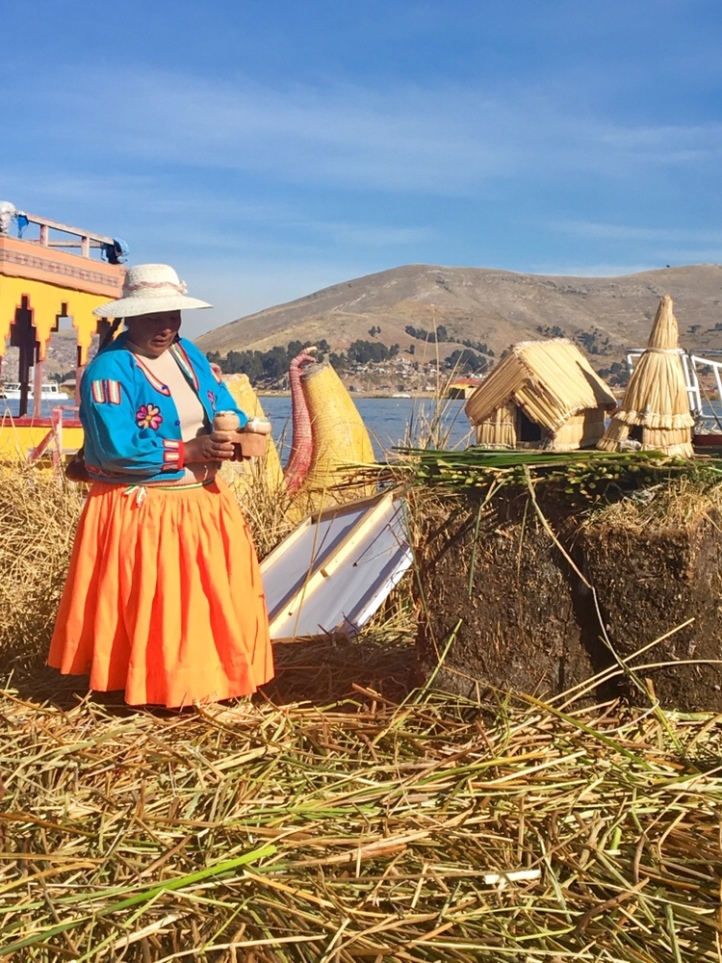 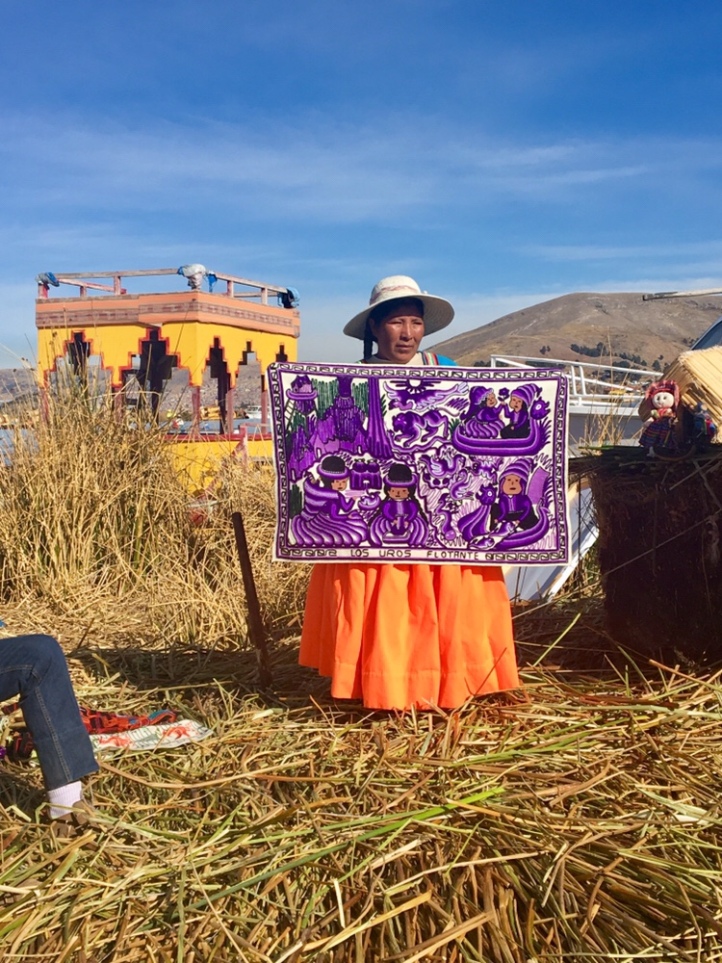 My best friend Jen visited her 14 years ago and said she found it very and too touristy and I have to admit I agree. The worst bit was sitting and watching whilst they sang to us like performing monkeys and worse when they attempted ‘row row row your boat’ for the English speaking there. 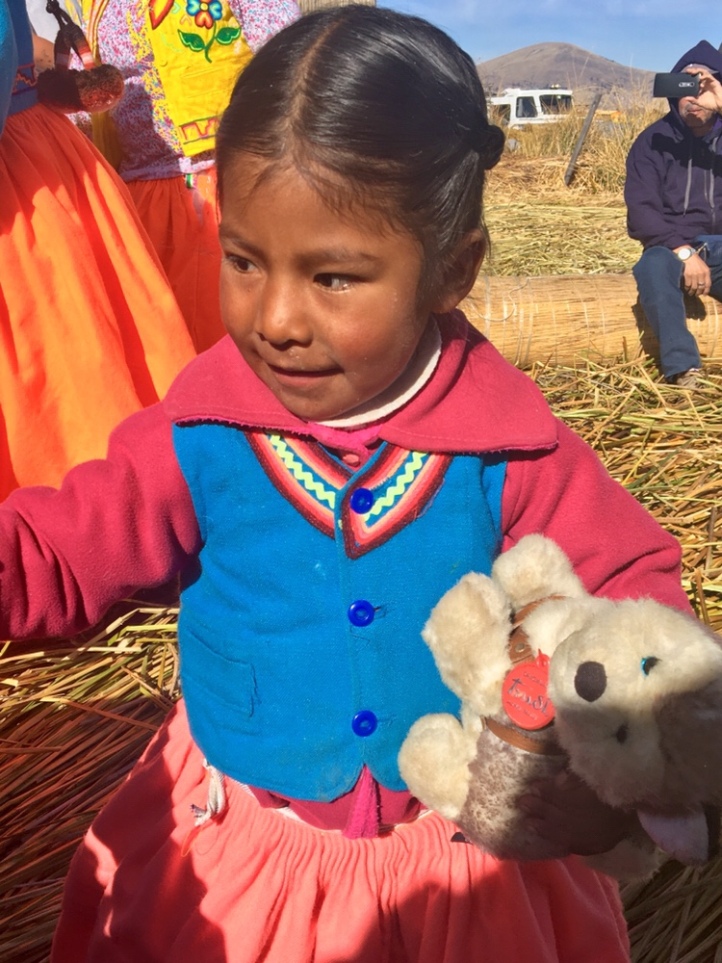 To meet these people and see how they live is for me all that is required, not these added ‘extras’ which I think ridicules them and doesn’t enhance the experience at all. I think I was on my own with this thought though as most seemed to enjoy it.

They make these big reed boats that can carry more people than they look capable of.

We all pay our 10s and jump aboard to sail across to another island.

I get speaking to a lovely Mexican woman and a guy from Chile here and it’s so good to be speaking Spanish again.

Back on our main boat, we head to the Island of Taquile. About 2,200 people live on the island, which is 5.5 by 1.6 kms and highest point of the island is 4050m. Taquileños run their society based on community collectivism and on the Inca moral code ama sua, ama llulla, ama qhilla, (Quechuas for do not steal, do not lie, do not be lazy). Farming and textiles are their main sources of income.

There are are 2 options. A walk up the hill to the square then on to the restaurant or stay on board to the other dock to the restaurant. Naturally I get off along with most of the others. We’re told it takes 30 minutes but it isn’t a tough walk and only takes a few of 10. We chill in the square for a while

before regrouping and walking along a beautiful path overlooking the lake, other islands and Bolivia to get to lunch. 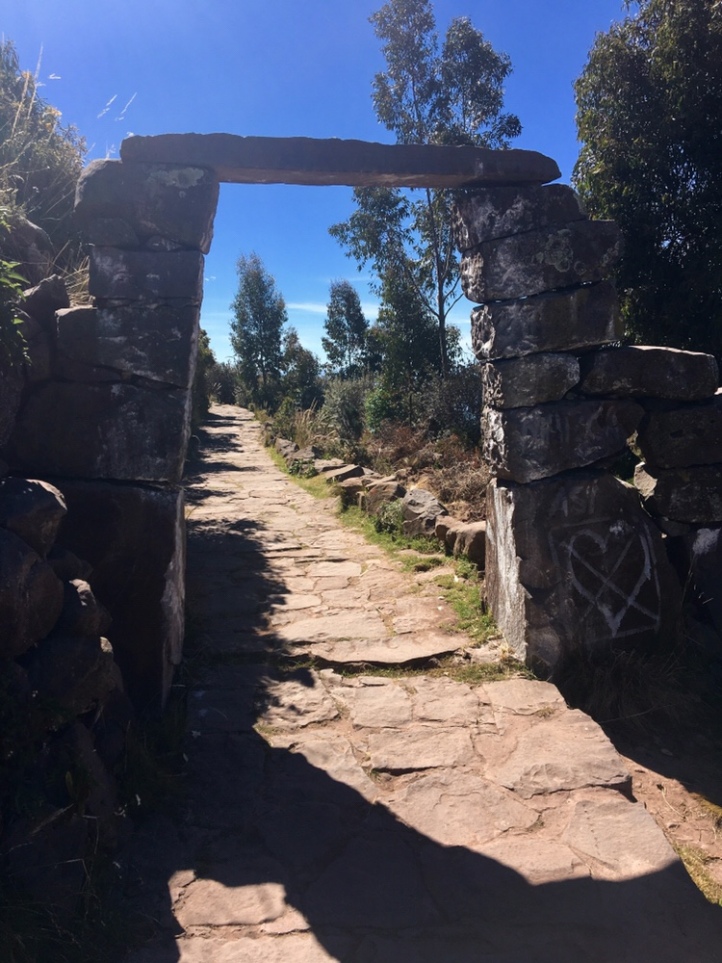 During lunch I get chatting to an interesting guy from the States and also to a lovely Chilean guy and his son.

There is a lot of information on why hats are worn a certain way, colours etc but I’m disappointed that there is no information on the history and importance of the lake to the Incas. I find it strange that such an important factor was left out. I’m going to Bolivian side tomorrow to Isla del Sol and know this has Inca ruins so should get the info im after on that leg….

It’s back on the boat for 2 hours back to Puno and back to the hostel where it’s chill time for a bit. I read about Inkabar online and go therefor dinner with a Dutch girl I met. Here I bump into the Chilean guy off today’s tour so join him for dinner. Spanish back in use again which is great. I really feel it’s improved loads in the past 5 months.

Early night again for another early start as on the move again!