Day 5…the highlight and pinnacle of the last 4 days hiking. It ends here – reaching the almighty and wondrous site of Machu Picchu.

The alarm goes off at 0330 and we all meet in reception at 0400. We make the half hour walk down to Puente Ruinas where we join the small queue that has already formed to go through the MaPi check point. Once open at 0600 it takes only a few minutes for our tickets and passports to be checked. Then we’re off, torches on we start the ascent….the start of a gruelling hours walk up over 2000 steps!

The going is tough and I let the others just plough on ahead. I’ve learned the hard way to just go at ur own pace. The pressure however is on as Renzo is starting his tour at 0615 do I need to be there by then. Despite the chilly start to the morning, the enclosed environment and steep ascent makes it hit and humid. I stop to delayer and carry on, glad that it’s dark so no one can see my hot sweaty self!

It feels like the journey is never going to end. It’s an absolute killer. I’m dying for a drink but don’t want to stop, just wanting to get there. I think I’m nearing the top and bump into Veer from my group and then hearing a noise from lots of people we can tell we’re nearly there. One final push and we’ve made it! Just under an hour it took me, but bloody well done to those in the group who did it in 30 odd minutes!!! I wd have had heart failure!

My main aim was to get to the top so I’ve no photos at all of this section – it was just a lot of steps!

We are told to meet at the top by the gate house. I wonder why we are passing so much and not taking the time to take things in and absorb this magnificent site when I realise it’s a kind of way way loop…start at the top and work ur way down.

By the gate house is a fantastic view, the iconic view of the city of MaPi below. I’m absolutely blown away and need a minute to myself. Cue…first set of photos of this incredible site.

It is believed that MaPi was built for the 9th Sapa Inca – Pachacuti – probably after his successful military campaign and growing empire. It was built as a fortress for the aristocracy and noble. It’s location was no fluke, chosen strategically for being hidden in steep mountainside away from strangers, engulfed in forestry with only 2 entrances/exits. It is thought to have been built in around 1450 but abandoned in the 1530s when the Spanish invaded – although unlike many other sites, it was actually never discovered by the Spanish.

Instead, it was not discovered until 1911 when Yale lecturer Hiram Bingham was led to it by a local farmer.

It is estimated that only about 800 people lived here.

The sites of MaPi….the gate house, seemingly used as a watch tower and does give the best view and photos over the entire site.

The Temple of 3 Windows – representing the Andean trilogy.

The guinea pig stone – carved to mirror the mountains behind it 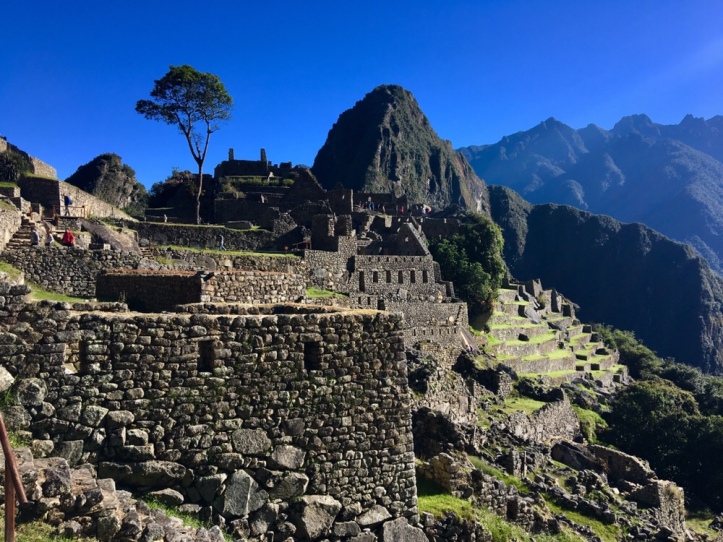 Following our trek around the site, it’s the end of the tour and we bid a heartfelt farewell to our fabulous guide Renzo who has not only been a lot of fun but extremely informative.

Back at the entrance, we take a loo and food break. It’s still only early but feels like lunch time.

This place has been on my must visit for donkeys years. Having not been able to do the Inca Trail, I’m keen to get moving to visit the Sun Gate Temple. This is the last part of the Inca Trail urself where those on that route get their first glimpse of this incredible site. I explain this to part of my group and a few decide to join me. I’ve walked for 5 days, my feet are now killing and the heat is immense but nothing will stop me from powering on to reach this part. We stop and take some incredible pictures

then carry on up the trail until we reach the this magical spot. As I sit there and take it all in, I’m suddenly over come with emotion. Visiting such amazing historical magical places that u e wanted to do for half your life can have that effect on you. Doing it with an equally amazing bunch of people is just indescribable.

I remember a conversation I had with some of my oldest best friends, knowing that I’m living out one of their dreams too. It again makes me reflect on how lucky I am and this picture above is for them. 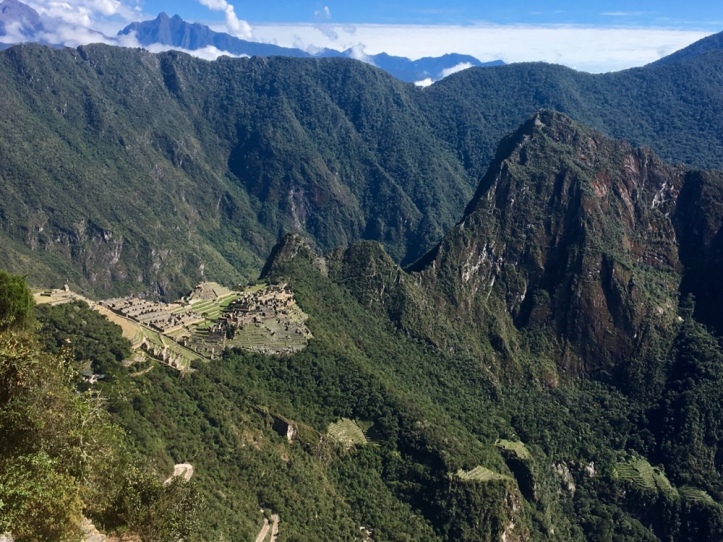 Loads and loads of photos follow before we have to set off. We walk back down and decide to cross back over to where we started this morning. Without the cloud, and the sun shining brightly above…it’s an incredible sight to behold. I’m absolutely made up and have no words…. 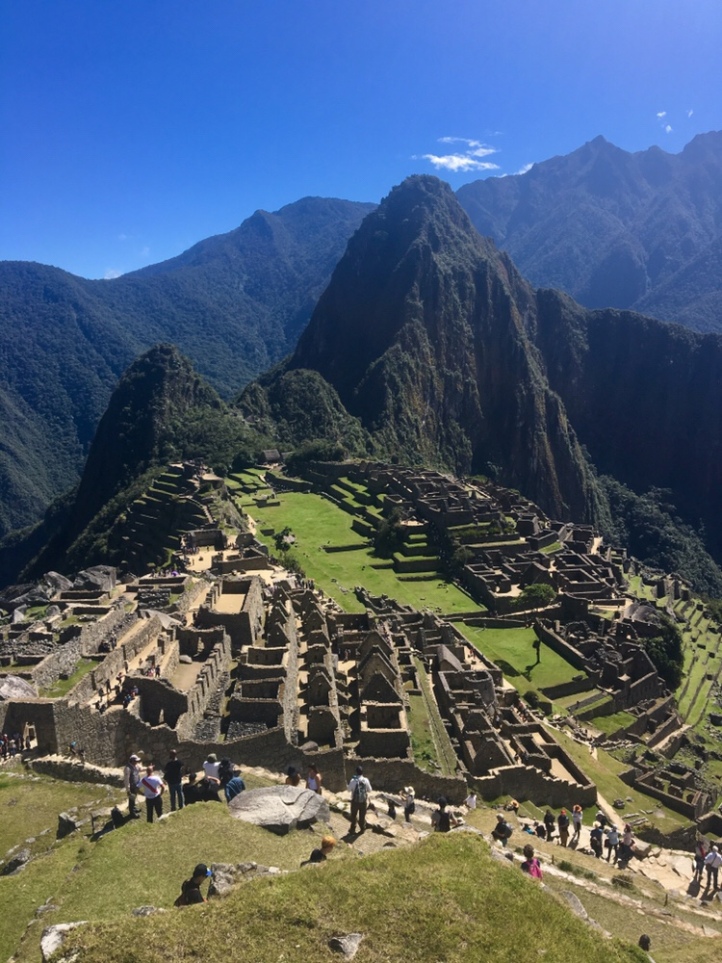 Sadly, it’s time to go…and now we face those 2000 odd steps but in reverse. As much as walking down us harder on the knees, it’s definitely bloody easier than walking up them…although it does feel like it’s going on forever!

Finally at the bottom, it’s time to big farewell to my awesome trekking companions – they’re going back by bus whilst I paid out extra to get the train back. It’s only a fake farewell as we’re all meeting up tomorrow back in Cusco for dinner!

I bet my stuff from the hostel and immediately get rid of the boots. Ahhhh flip flops are heavenly! 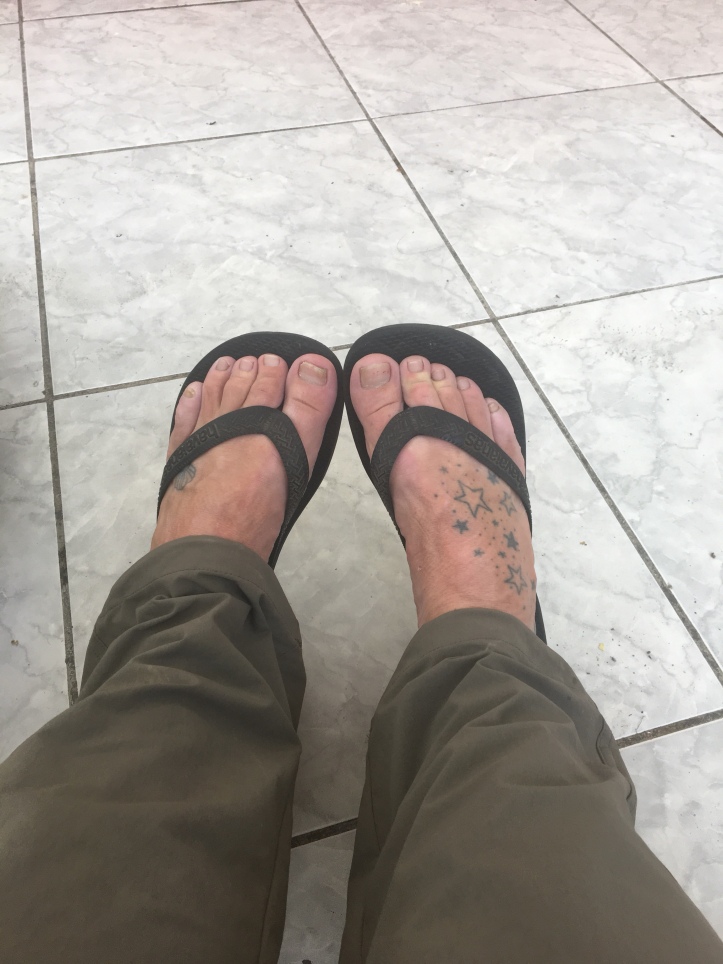 And so is the beer I have when I join Ulf and Marcus in a neighbouring bar! 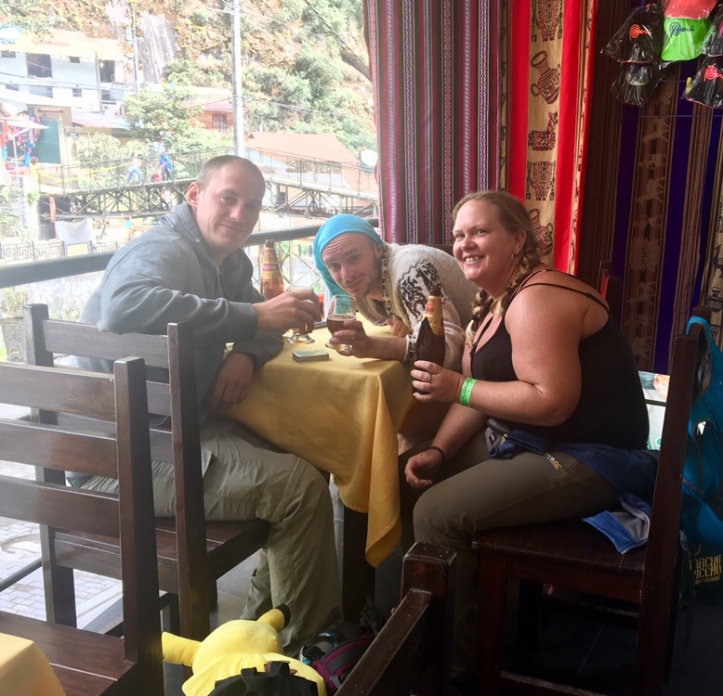 It’s time to get the train and for the 2 hours, I take a look back through my photos and reflect on what has been one of my most amazing experiences – not just of this trip, but of my life so far! Absolutely fricking awesome!

MaPi in 2007 was voted one of the new seven wonders of the world in a global poll….and it most certainly is.

Not only that, Machu Picchu Reservations were a great company to do it with. Nowhere near as expensive as some of the others but still excellent service throughout. The tour was 180$ with an extra 70$ for the train.

The Salkantay Trek has been voted one of the 25th best treks in the world by National Geographic Travel Magazine. It may not have the kudos and acclaim if the classic Inca Trail but the sights u see along the way are nothing short of spectacular. If your visiting a lot of Inca ruins whilst in the area anyway, this is an absolute must!