I wake up before my alarm…this means I can put the heater on before I have to get up and by the time I do it isn’t half as cold!

A quick cuppa to warm me up and I’m out the door by half 6 to head to the MaPi Reservations office for my bus at 7.

Today I’m off to the Sacred Valley…the heartland of the Incas stretching over 60km. It was named so because it was believed to contain some of the best and most fertile land in the country. Important to the Incas because if it’s geographical and climatic qualities.

For once in South America, something is on time and we’re on the bus and off by just gone 7. Our guide it seems is very time conscious and starts by explaining that we have a full itinerary and need to be on time at every stop. He doesn’t want to waste time and ruin people’s day by looking for lost people or those who can’t time-keep! I love this guy!!!

After about 30 mins we arrive at our first of many stops today. We’re at Chinchero which is our highest point at 3762m.

The first thing we’re shown is this big field split into tiers by brick walls. 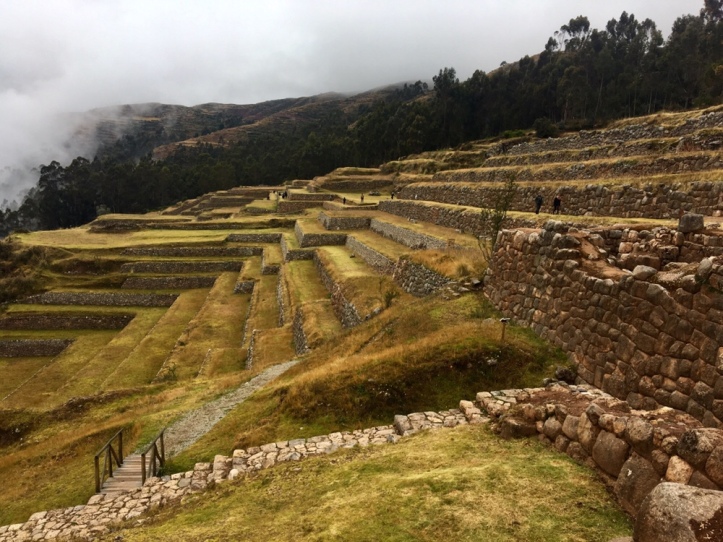 This our guide explains is how the Incas farmed on high mountainous ground by tiering it off and levelling each tier.

There’s not much left of these Incan ruins but we are told it used to be the home of Tupac – the third Incan ruler. 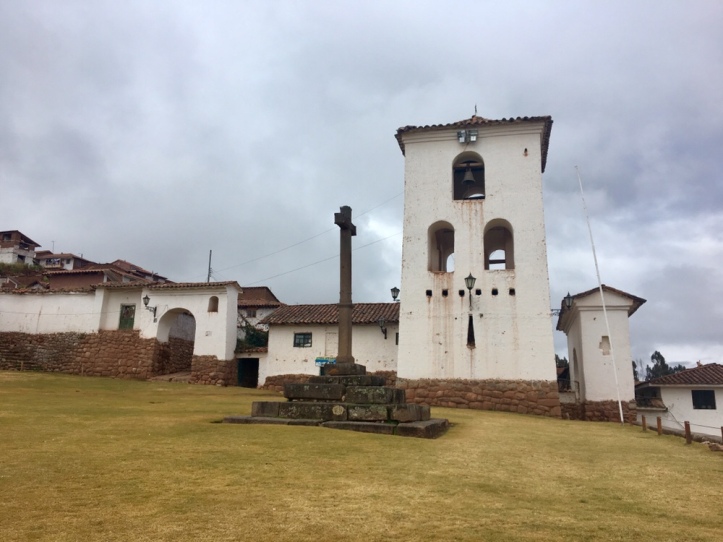 We go into a very colourful church but aren’t allowed to take pictures. This church is also built on top of a temple. It is full of catholic artefacts but again with the fusion of the 2 religions, there are paintings of potato plants on the walls (Peru has over 3000 types of potatoes and along with corn, a big part of their produce).

At a local craft stop, a local woman gives us a demonstration of how alpaca wool is washed, spun and died. All very interesting – soap from a cactus and red dye from the blood of bugs found on cacti! 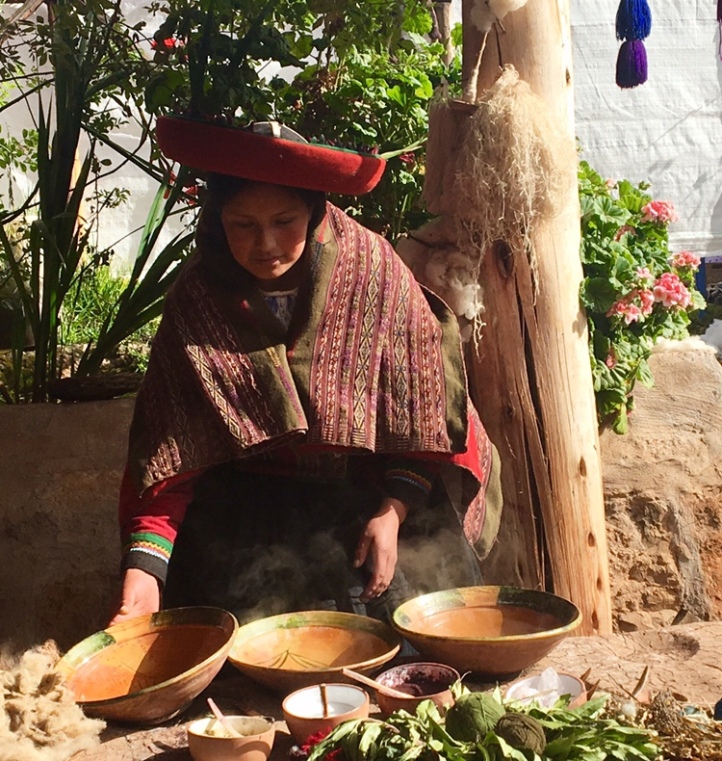 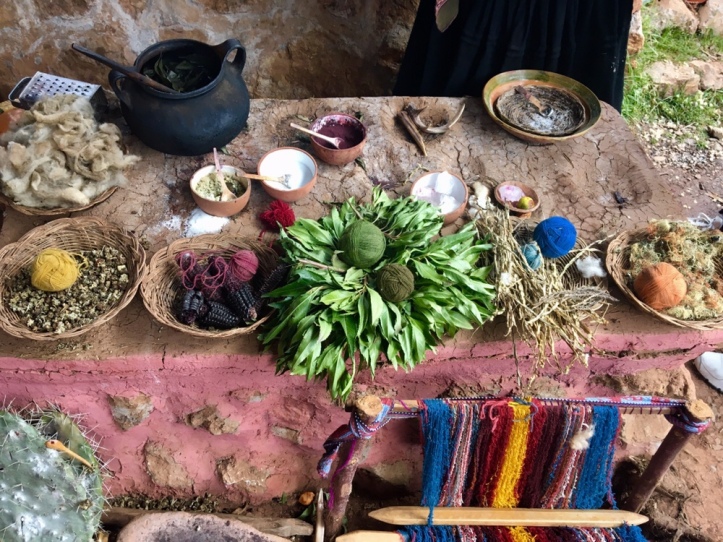 I’m not sure if it was a sales gimmick but our guide tells us that the products sold here are genuine alpaca as they don’t have access to the mass synthetic manufacturing of these things from China. I’ve been missing my slippers in these colder climes so buy a pair of alpaca socks. They only cost £3 so if they only see me through the winter here that’ll be fine!

Our 2nd stop is at Moray and a bit like the first farming field we saw but this is bigger but full of tiered terraced circles. 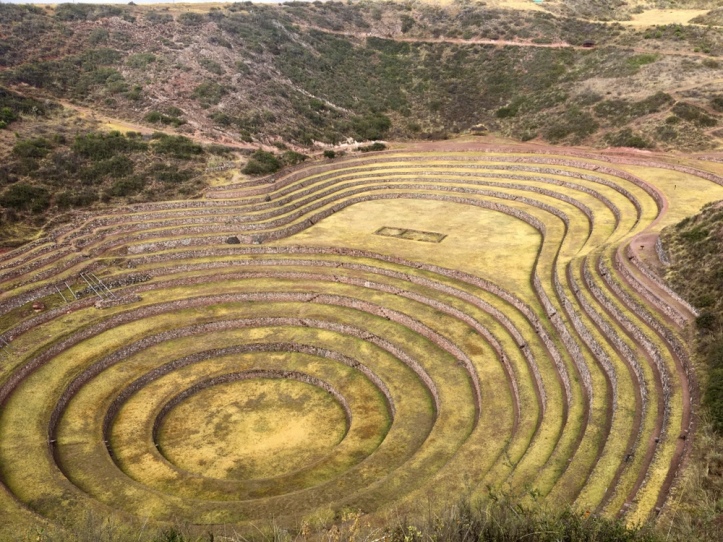 There have been many hypotheses on what this might have been, ranging from a collesium, a bull fighting ring, to an airport for aliens!

Once MaPi had been discovered in 1911, it was felt that there must be other such sites out there so in 1930, a number flights started over the region. This is how Moray was discovered.

This place too was also for farming but this particular site was used as a farming laboratory. A 1970s Australian physicist confirmed this. He discovered that there was a 10-15 degree difference between the top and bottom of the site and that the Incas has developed their own hybrid system. They modelled it to work with thermal dynamics of hot and cold – using the sun heating up the rocks and cold winds coming in mixing with this heat causing different thermic climates to see what crops (potatoes) grew best where and under what climatic conditions.

It was also discovered that the soil here wasn’t of the area so must have been brought in. The temperatures represent that at sea level farmland and also that of the Andean region. The Incas again were well ahead of their time in scientific thinking.

MaPi delves 17m below ground, with structural supports and drainage in place. It is believed that for these farmlands to have been so efficient and not flooded, the same system to have been applied.

Before our 3rd stop we make a quick pit stop in the town to sample and purchase some salt along with the tasting of salt chocolate and quinoa chocolate. The latter was definitely the better and tasted like Rice Krispie chocolate!

After purchases, it’s on to Salinas de Malas. This a set of tiered artificial salt ponds on a mountainside. There are now over 6000 of them and they are quite a sight to behold. 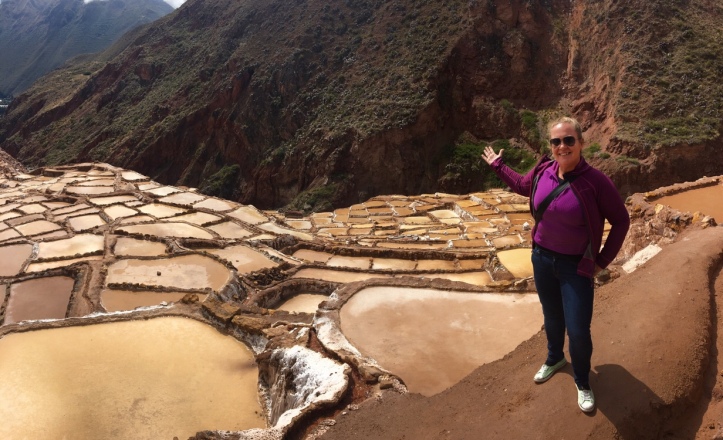 One question most of us had is how is there salt water up in the Andean mountains. It is explained that the water comes from a subterranean natural spring, which is mixed with salt deposits from prehistoric salt lakes. Over millions of years, tectonic plate movements have buried the deposits beneath the mountains, then mixes with water and flows from this spring down a cleverly structured stream to the ponds. 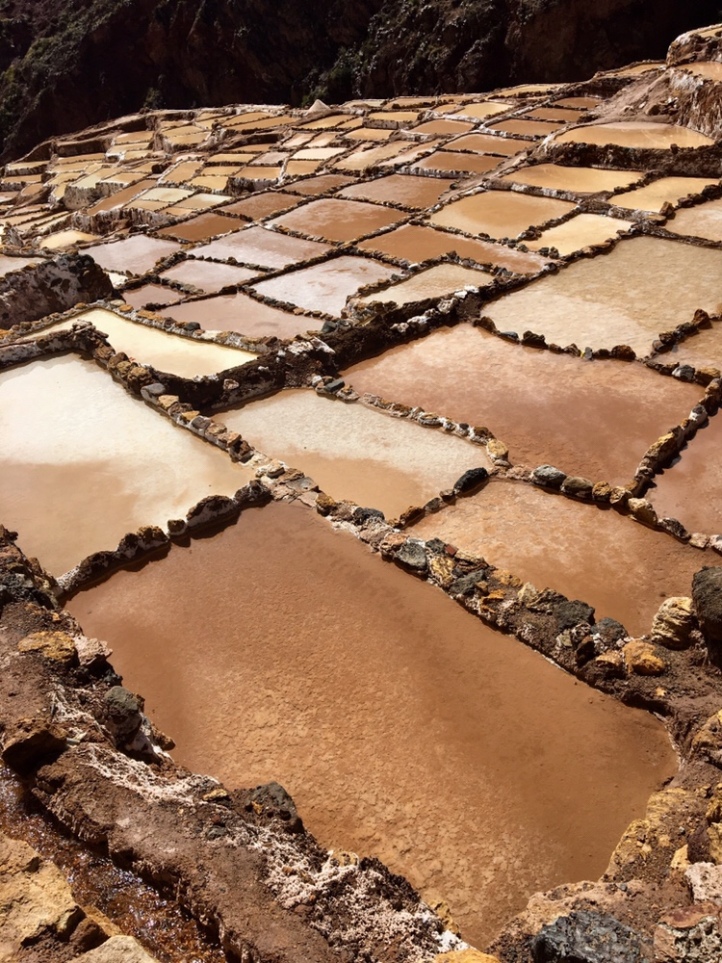 The concentration of salt is almost double that of the sea. It takes about 20-30 days for the pond to dry out and salt to crystallise, then the pond is filled again.

This place produces around 2000 tonnes of salt in just 6 months and is ran, managed and owned by the local people and families and the salt is sold locally.

These salt pans date back to the Wari civilisation but the Incas saw the benefit of them and engineered and made improvements to make them much more efficient.

After a fabulous buffet lunch (that was included in the price), we go to Ollantaytambo – a former administrative centre of the Inca empire. This is also the most famous starting point of the famous Inca Trail. 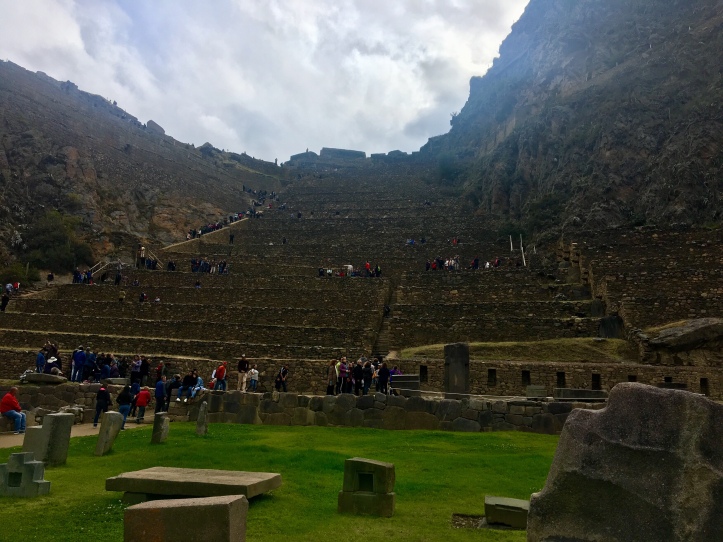 Ollantaytambo is made up of huge farm terraces known as the fortress or Temple Hill. It was once the home of Inca nobility and famous for one of the only battles won against the Spanish until Pizarro and his men came back and captured it. 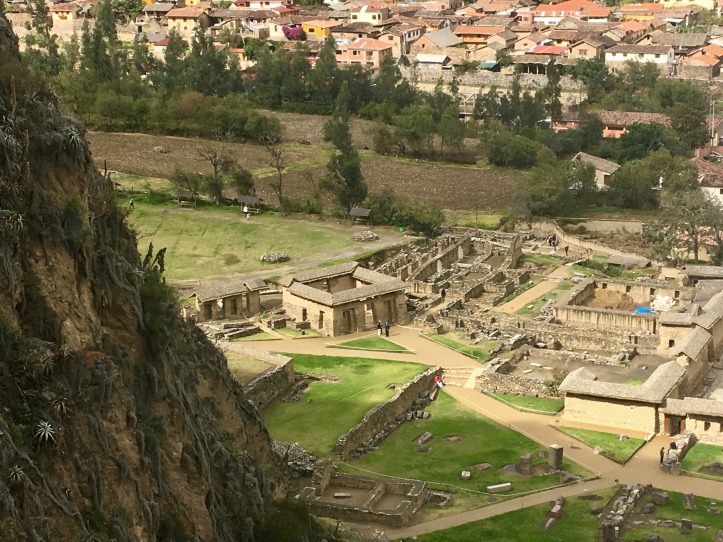 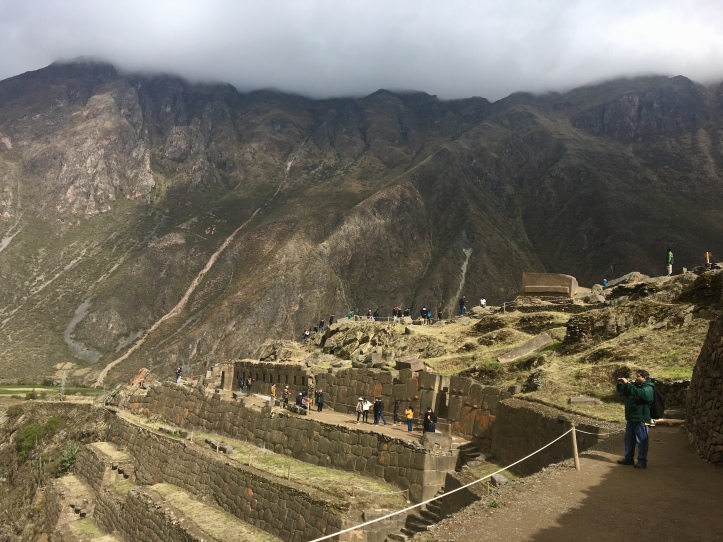 It’s an extremely mesmerising place and the enormity and scale of it is hard to take in. As you climb the steps, passing the military area, you head further up towards The Temple of the Sun. The temple focal point is the wall of 6 monoliths. 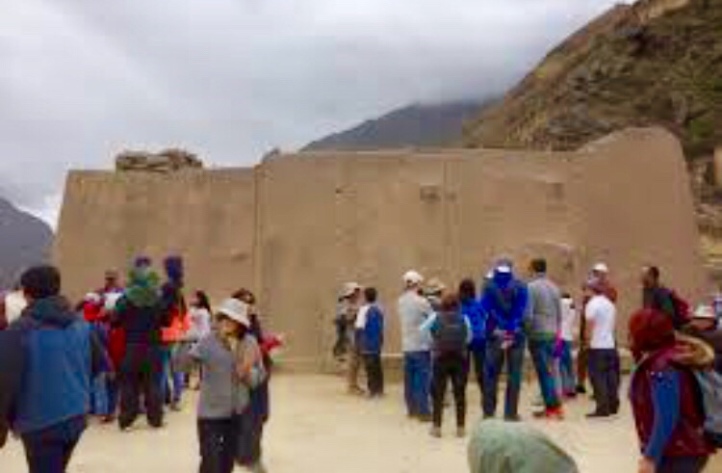 These weigh over 50 tonnes and were brought from a quarry 7km away. It is amazing how the Incas orchestrated such mastery and got these humongous stones here. Their skill and intelligence is further demonstrated in the construction of the wall with expansion joints between each stone and a shock absorber layer underneath each one.

Lying around are mapped out foundation stones and many more larger stones that prove this temple was never actually finished. The positioning of this temple in relation to the mountains and sun rise and set was no coincidence. This temple especially was of great importance on the summer and winter solstice.

Being housed in amongst the amazing Andes, this was another perfect area for growing crops…hence the rows and rows of farming terraces. With conditions good and produce a plenty, here was ideal for storing all the crops. Store houses can be seen all over the site and even in the distant mountainside. 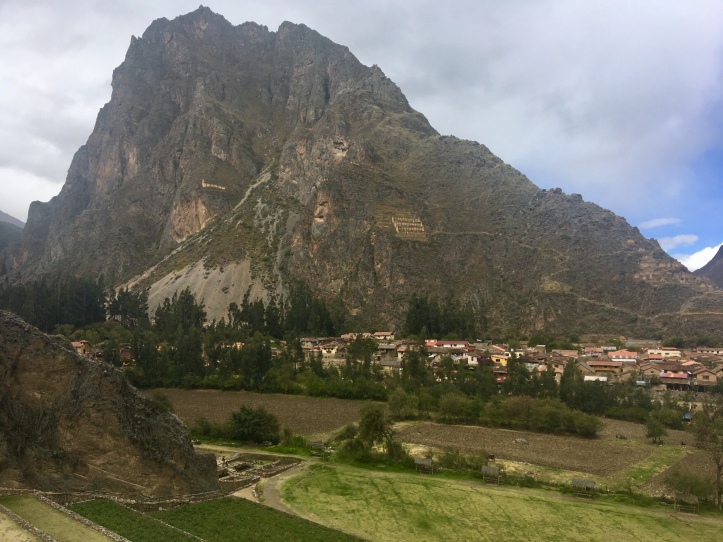 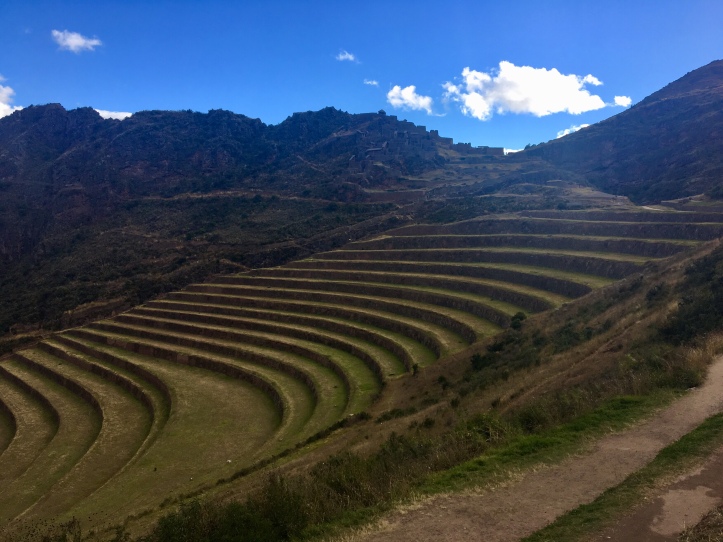 This place is spectacular and I wish I had more time to explore and learn more. It’s amazing! If I’m in awe of here, I’m ecstatic for the big one in a few days time!

Our last stop is at Pisac, one of the most amazing and still intact Inca sites around. Due to its prime location to the vital Inca road through the sacred valley and bordering the eastern jungle, this made it hugely important for the Incas and also a strategic controlling point. It is believed that Pachacuti ordered this to be built after a victorious defeat of an enemy.

From the car park, we head straight for the top and in the mountain side, there are a pile of holes. Our guide explains that these are tombs. 3500 of them were discovered but nothing much found in them as sadly they had all been looted. 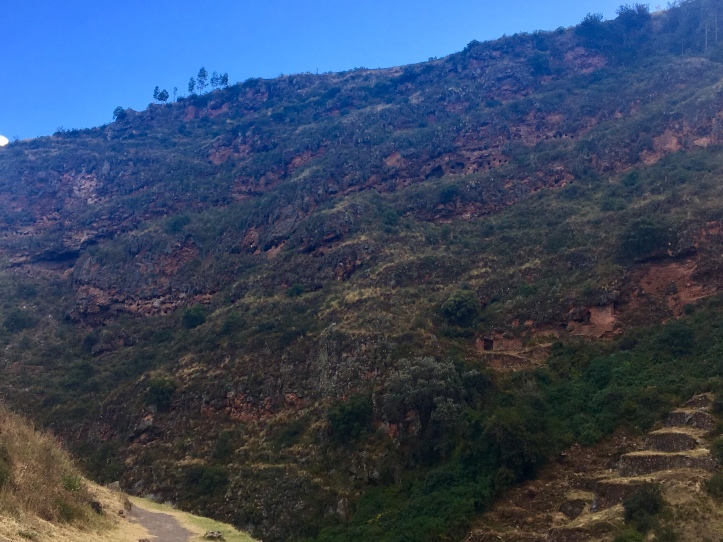 From the top, there are magnificent views of the mountains in front and the valley below. 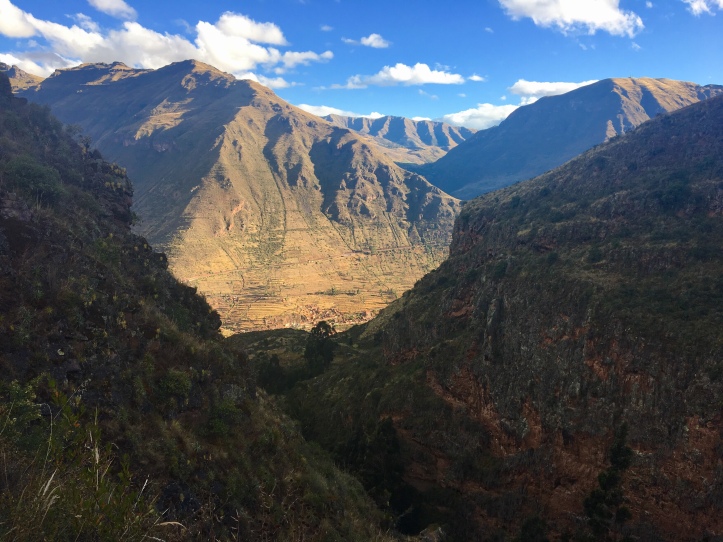 The architecture and layout has again obviously been well thought out and meticulously put in place with the farms being in line with the sun worked out by it’s positioning on the 3 mountains in front. It’s truly amazing. 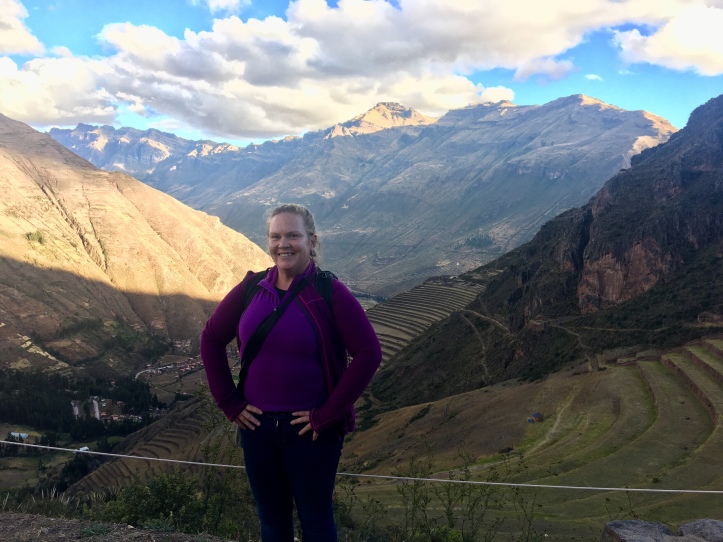 There is a hike u can do here which I would love to do but I don’t have time and part of the trail is closed off – due to a landslide I believe.

Back on the bus and it’s time to head home after what has been a most incredible day. We crammed a lot in, they definitely saved the best places until last and my brain is absolutely flooded with information!

The cost of this is normally 80s but I got it for 60 due to booking the Salkantay. You have to pay 70s for a pass to enter the 4 Inca sites and another 10 for the salt pans. Lunch, travel and guide included also. All this for only £32. Fit the information I’ve sourced today and sights seen, this was definitely worth every penny.

The Sacred Valley is certainly that. Several of the most impressive and interesting places I’ve ever been. The Incas were incredible people – so ahead of their time, leaving behind them a plethora of history and a fantastic legacy.

This is what travelling is all about – simply amazing!