I am sad to be leaving Huaraz. There are just so many amazing hikes to do but I don’t have the time or money to do them all. It is however a place I think I will definitely return to. Our bus is 0915 so an early start to pack and eat breakfast and we’re pretty much off. The view going this way is still pretty spectacular but not as great as seeing it for the first time like on the way in.

The journey also felt longer and the bus too hot by far.

We stopped for lunch at a much more reasonable lunch time and the food here was much more palatable. With a big Chinese influence in Peru, I went for the chaufa (egg fried rice).

This journey is long and we appear to have hit Lima. At the moment it looks rather unimpressive with favelas stretching as far as the eye can see. The only other noticeable thing is the traffic. 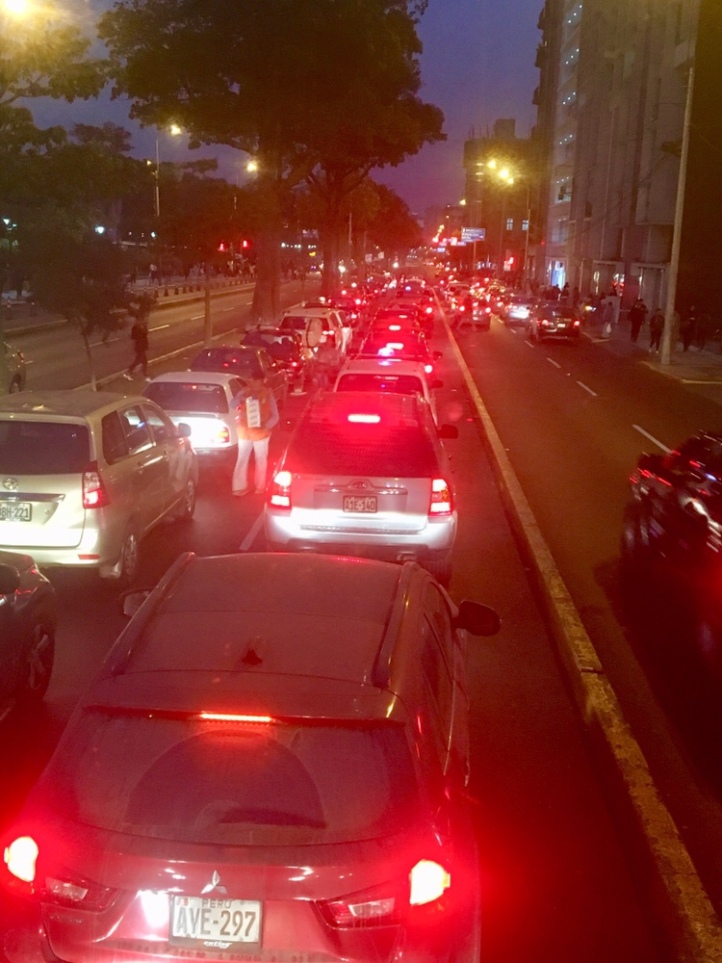 This a million times worse than Bristol and we still have 19kms to go to the terminal! Stuck in traffic, no a/c and the radiators now pumping out heat this journey is becoming unbearable. After the drop off in the north terminal to getting to my station and a taxi to my guest host – a total of 13kms – it takes over 2 hours!!! I think a Friday rush hour makes it worse but my taxi driver tells me this is just Lima!

I finally arrive at my hostel, which is actually a stunning guesthouse. I go grab some beers, make some guacamole and chill on the sofa with a film. This place is cool….and there’s nobody else around except me so it feels great and just like being back home.

As you’ll be aware, I don’t normally do dorms but not being able to afford the private here and I thought I’d be ok in a 2 bed room…think again! The girl in here snores like a fucking freight train! Omg….after an hour of telling her to shut up, I can’t take it any more so me, my pillow and blanket go downstairs to catch some zzz’s on the sofa!

In the morning Chevy (one of the hosts) wonders what the hell I’m doing there! He’s very apologetic but someone snoring is nothing to do with him or his guest house! He and his wife Silvia do let me change rooms to another dorm thou which is great for me as there’s currently no one in there.

A new arrival came last night – Manuel from Bogotá. He wants to join me in the City Tour so we set off for the Chefs Cafe meeting point where I meet a lovely couple from Durham doing the tour too and we swap a lot of info and advice from travelling in opposite directions. We meet Franco our guide and go get the bus to downtown. The buses are so crowded it takes 3 consecutive buses for the group to all get to the start point!

Lima is huge but it doesn’t have the draw of other big cities I’ve been to so far in South America. The history and the locations didn’t grab me at all and I found myself drifting off and not really listening that much. The fact our guide Franco didn’t wear a microphone like other guides have done, in a city with a lot of noise and a lot of traffic made him very difficult to hear also. When he wasn’t talking about things to the group as a whole, I did have some great conversations with him one on one in Spanish thou.

Lima is the second largest city in South America…home to 10 million people. It was as founded in 1535 by Francisco Pizarro on the catholic holiday of the epiphany. This was when the 3 kings visited baby Jesus and why the city is known as The City of Kings.

The tour starts on a jolly note by Franco telling us despite the huge population, people normally die around the age of 60!

We follow him through the shopping streets of the historical centre to Plaza Mayor which houses the city hall, President Palace & Cathedral. 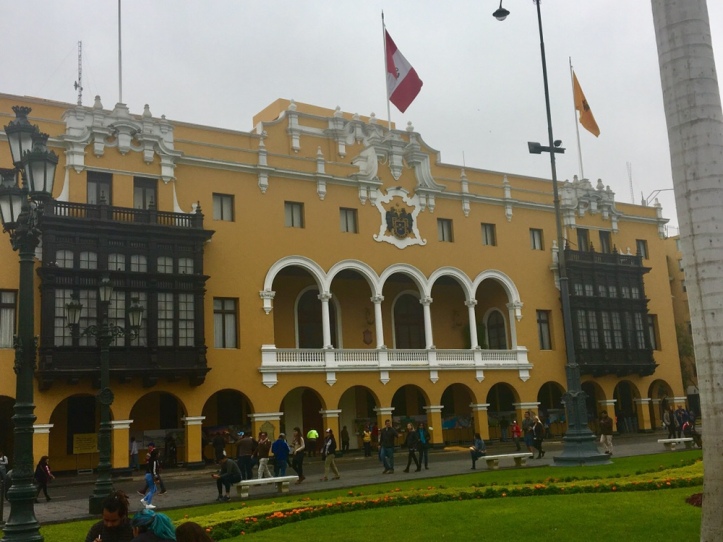 He informs us that the Downtown area has been restored after many earthquakes have quashed the area – especially the one if 1940 which did a lot of damage to some original quechan buildings. The historic centre was declared a UNESCO world heritage site in 1988.

From the main square we go to Santa Domingo Church. Here lies the skull of San Martín here. 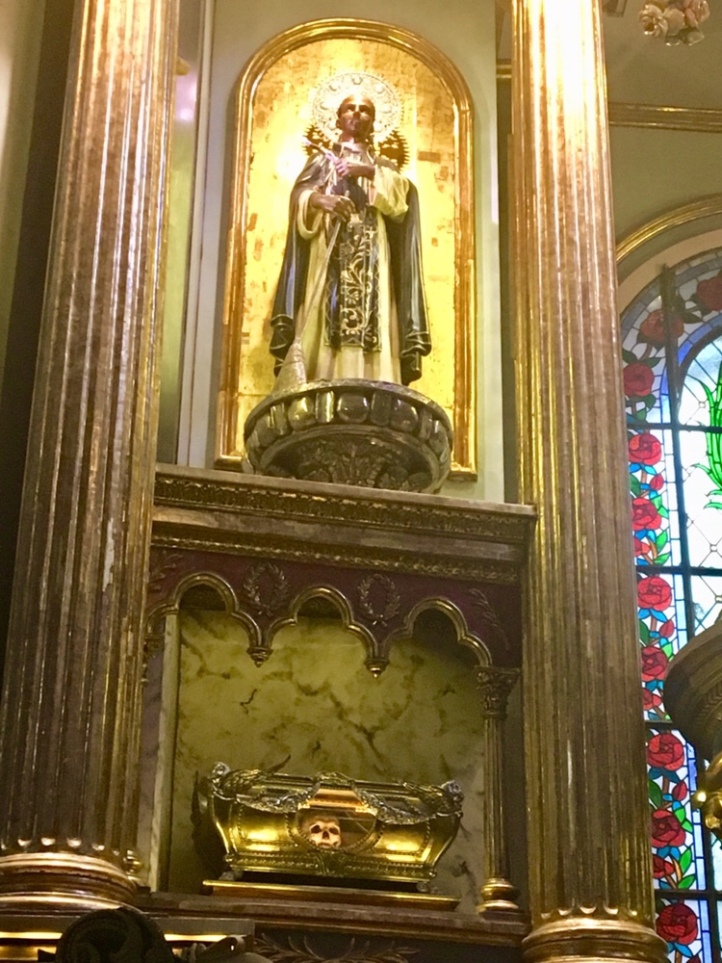 He’s the Patron Saint of Lima and is seen as the protector of the city. People come here to ask for his blessing and forgiveness.

We visit the old Post office building which is currently shut and is changing into a museum of gastronomy. The glass roof of this amazing building collapsed during an earthquake.

We go to the central market and learn about some lical vegetables and their health benefits and into china town. Peru has a massive Chinese community due to early slavery and then a heavy labour workforce. The food is Chinese with a Peruvian twist.

After the tour, Franco tells about a good restaurant that a few of us head to for lunch, joined by Franco. Pacifico restaurant is quite pricey but has 2 excellent menu del día options for only 4 & 5 quid. Time to try out some local food…

First we have a pisco sour – we gave these been all my adult life! Must have been reading about the egg that put me off…

Next I decide to try ceviche.

I’m told because the lemons are more butter here, the fish ‘cooks’ better in the acid. It looks great and the portion is huge. I eat about half, but it most certainly not my thing. Glad I’ve tried it thou. Lastly for main I have lomo saltado. This is fried steak with onions and tomatoes over chips with rice and a fried egg! Proper stodgy…this would be great on a hangover! I eat what I can and as others leave I end up chatting to Franco until gone 4. It’s now too late to visit the San Francisco church which houses all the bones so I go for a meander around the shops before heading home.

With Lima being food capital of South America I had made a reservation for lunch tomorrow at a very nice restaurant but having been invited to a party instead, I try to find another so I can go to tonight. Most restaurants here u need to book months in advance. I try Rafael Osterling which is only 4 blocks away and although they’re full, they tell me if I get there for opening, I should be able to get a bar seat.

I get there for literally just after opening at 8pm and the place is rammed. I get one of the last bar tables and by quarter past, people are being turned away!

Miraflores is definitely a trendy part of town and where some of the rich locals and expats live and hang out. Not having any nice shoes on me for the occasion, I do try and hide my scruffy Converse under the table! Service was slow to start but did improve. Staff were very friendly and great with food advice. I settle for a lovely bottle of Australian Riesling (must try to find this at home)

duck pancakes to start and a fish curry for main. Dessert is devine

and followed by a freebie sweet treat after that. I’ve been chatting to 2 local couples during the course of evening which has been very nice. I do a lot of fine dining with my Mum so I did miss her on this one.

I’m so full I can barely move, so get the bill (I don’t think £67 is that bad for a treat in a posh restaurant) and waddle home to bed. A thoroughly enjoyable evening and worlds apart from my dining experiences over the last 4 months!

I have a lazy Sunday morning. Peru are playing Saudi Arabia in the football and my hosts are having people over to watch the game and have a bbq. Not quite sure of the plan thou, I decide I should do something with the bit of my morning that’s left. I think about walking to Barranco. Lima is on the Pacific coast too and Miraflores and Barranco both lie on the coast line. 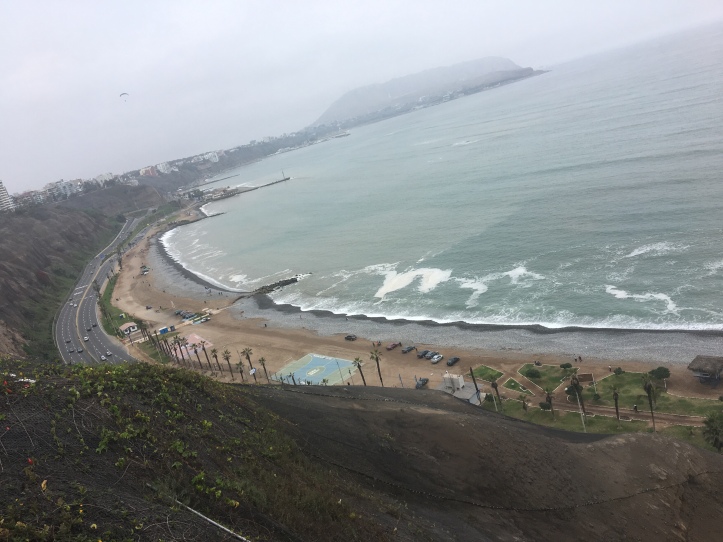 My walk is halted however by finding a shopping mall en route – with proper brand names shops in it! Woo hoooo

Prices are quite dear and I have no space in my bag but as I’m heading into winter, I do buy a fleece in the sale in an outdoor shop!

As I can hear the football in the surrounding restaurants, I walk back home to see what’s happening. We’re 30 mins into the game and a few people have arrived. Up on the roof terrace where the barbie is getting ready I meet some amazing friendly local people and a lovely couple from the States.

We eat, drink, dance and sing away into the evening. 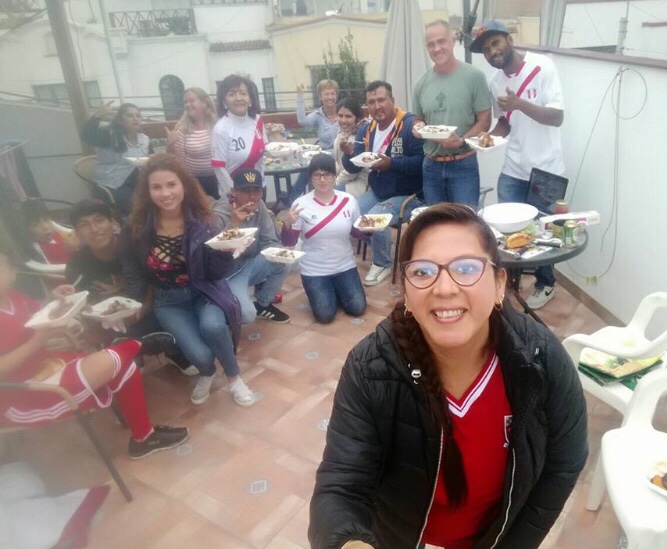 Some leave, others come and some even return during the course of the day/night. Around 11pm, we head to a few bars in Miraflores. We have a right giggle, spending a lot of time on the dance floor but at god knows what hour we call it a night. I’m out safely in a can by Jean Paul & Ximena And home I go to pass out!

It’s Monday and I’m meant to be leaving but my rucksack’s contents are all over my room so needs properly repacking and at the moment, I can barely lift my head off the pillow! By 11am I realise moving today isn’t going to happen to I text Silvia to see if I can stay an extra night! Affirmative reply received and I promptly fall back to sleep! I finally get up gone 1…maybe later and feel like death. I finally head out for some lunch around 3pm. Not even Jack Daniels chicken from TGIs can help and I end up taking it back in a doggy bag! I do however get to meet Peru’s most famous marmalade eating bear (Paddington) on my way there thou!

I chill with Chevy and Silvia a bit but we all feel like shit and can’t wait to call it a day. Early night for us all on the cards!

A waste of a day and not much of Lima really seen but hanging out with local people is as much an enriching experience as visiting different places. They’re a great bunch of people and I had an awesome day and night.

After booking another bus ticket for tomorrow, it’s bed time!