After 3 hours sleep the alarm goes off like a WWII siren!

I drag my sorry ass out of bed to shower and finish packing to head off to the airport! The vow I made to not go out the night before leaving somewhere again easily forgotten and broken!

Im flying with Avianca again this time and they’re a great airline so everything runs a lot better than it did last week with Viva Colombia! I mull around the airport for a bit, get some breakfast and manage to find me some tea!

Board the plane and I’m asleep in minutes – I even miss the drink trolley!

The main airport is a fair way out from the centre of Medellin and a taxi can cost in the region of 70,000. It’s much easier to get on a bus outside the airport and if staying in El Poblado (most backpackers do) and get off at the shopping centre San Diego. The journey takes approx 45 mins and it’s a mere 10,000 pesos.

From here you get a taxi (there’s loads of them about) to El Poblado. If there are other backpackers on your bus, ask them to share with u which is what I did.

Taxis are quite cheap in Medellin and only cost us 5000 each to our different accommodations.

Once here I checked in, got some food and checked out some local gyms but christ they’re expensive….more than I was paying back home! Will have to mull this over.

I head to the supermarket on the way back and cook me one of my nicest dinners to date – the humble jacket potato and it was heaven on a plate!

Knackered from the night before, I plan my route for tomorrow and by half 9, decide to call it a day!

Saturday I wake early and fresh as a daisy. I make me some breakfast and research and plan more things to do in Medellin. It’s going to be a busy few days.

Today starts with a free walking tour of the city. I get on the metro (which is easy and safe enough) to our meeting point of Alpujarra. I check in, join my group and away we go. Our guide Monsa is lovely and I chat to her in Spanish as we start off…and ask her quietly about the elephant in the room topic – that of Pablo Escobar. I had read about Escobar tours and after reading a few books on him and this era had a vague interest to do one. A review I’d read had made me question doing this based on the fact that a lot of the local people still vividly remember the atrocities, violence and scariness of these times (it was only 20-30 years ago that this terror reigned. Escobar died/vomited suicide in 1983) and going to take photos and selfies in front of his grave and at La Catedral prison etc just seemed massively insensitive. This was reaffirmed when Monsa did bring him up to the rest of the group and referred to him as Voldemort so that local people wouldn’t know who she was talking about. They are doing a lot to rebuild their city and its reputation – once deemed the most violent and dangerous city in the world! This is prevalent across the whole of Colombia and their focus is on that of hope and looking forward, not making celebrities of people like Escobar and the drug trade. Programmes like Narcos really haven’t helped with this though.

Monsa started the tour by telling us the history of Medellin and the of the Paisa people (people from the Antioquia region). The are made up of largely if Spaniard Basques and Shephardi Jews. In the early days (pre 19th century and industrialisation) due to the mountainous region in which Medellin is surrounded, the Paisas felt quite cut off from the rest of the country. With focus on self reliance and little to do with the neighbouring regions, they became known as massively independent and hard working. Not being on a main ship route etc, Medellin doesn’t have the colonial splendour like other cities. It was only at the beginning of the 20th century with the emergence of the rail infrastructure that the city’s growth began to occur – that and the rise in the boom in the coffee industry in which Antioquia is home to La Zona Cafetera.

The sculpture in Apujarra represents the history of the Paisas here. 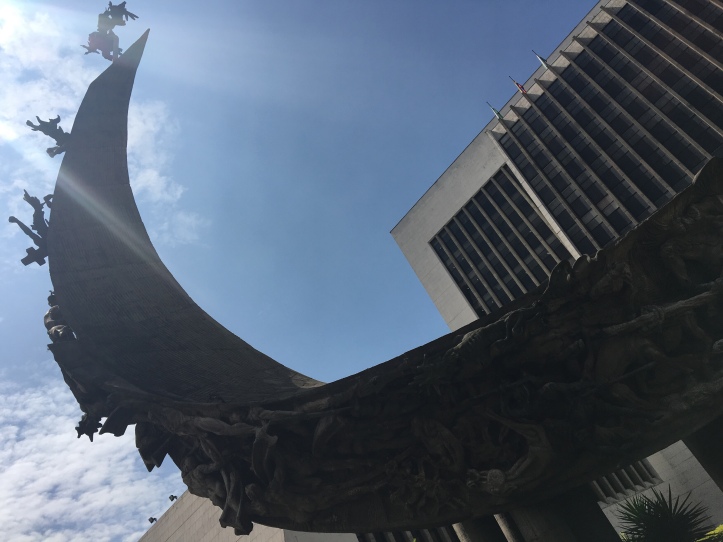 Colombia and Medellin has a colourful political history…a lot of which I’ve mentioned in previous Colombia posts. It has been riddled with government corruption, extremists and drug crime for many many years. The elections of 2002 where Uribe win by wanting to try a different strategy and focused on that of peace talks to try and eradicate this. The history of this gets more complicated as another election took place 2010 and another planned this year with socialist Fajardo currently being favourite

Fajardo has done a lot for Medellin since being elected as mayor in 2004. His visions of improving life and run down areas through architecture and education. This can be seen throughout the city and includes Bosques de Luz (forest if light) which is made up of 300 light masts over 22m tall

in a square that was renound for criminal activity but regenerated when the market that was there burned down.

Education is another big focus for Fajardo and he set up library parks in the more notoriously dangerous barrios but aren’t just places to access books but also run groups on learning arts such as drama, photography etc. There is one such library in this square.

From here we wander into the centre and the old palace building which was the court of justice but us now a great shopping mall that houses local clothes shops and wear the products are made on the floors above.

We walk past Iglesia de Veracruz

which we are told is one of the oldest churches in the city and the one that foreigners predominantly used to use. The park in front and street to the side is also a pick up point for a certain type of lady. Hotels in the vicinity take bookings by the hour not by the night! Police are however cracking down on prostitution in the area.

Just down from here is Plaza Botero and you will find many of his sculptures around here. 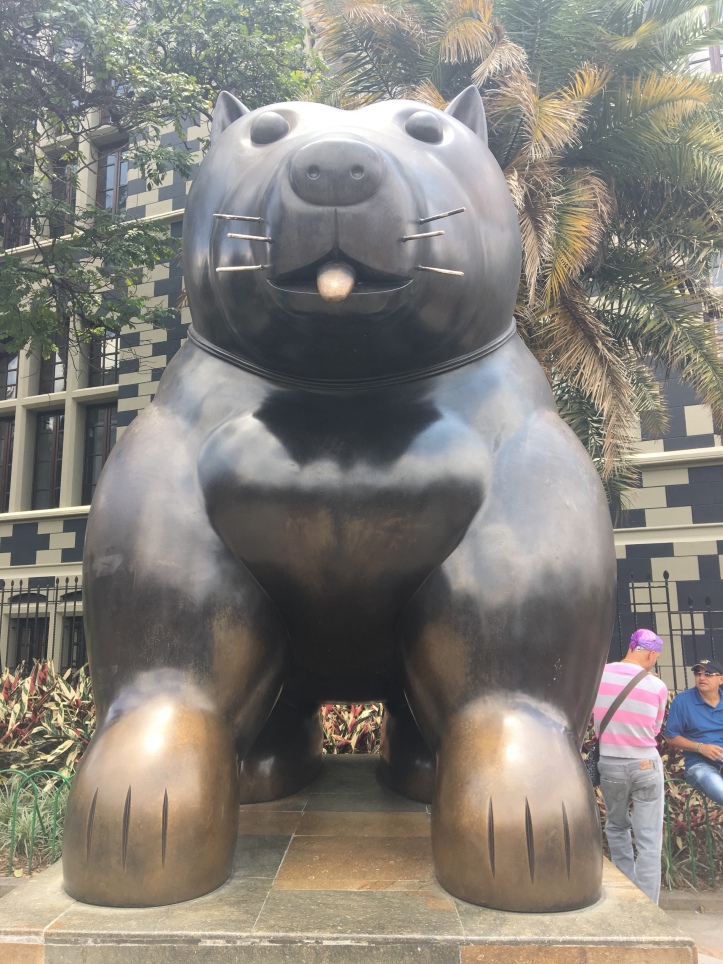 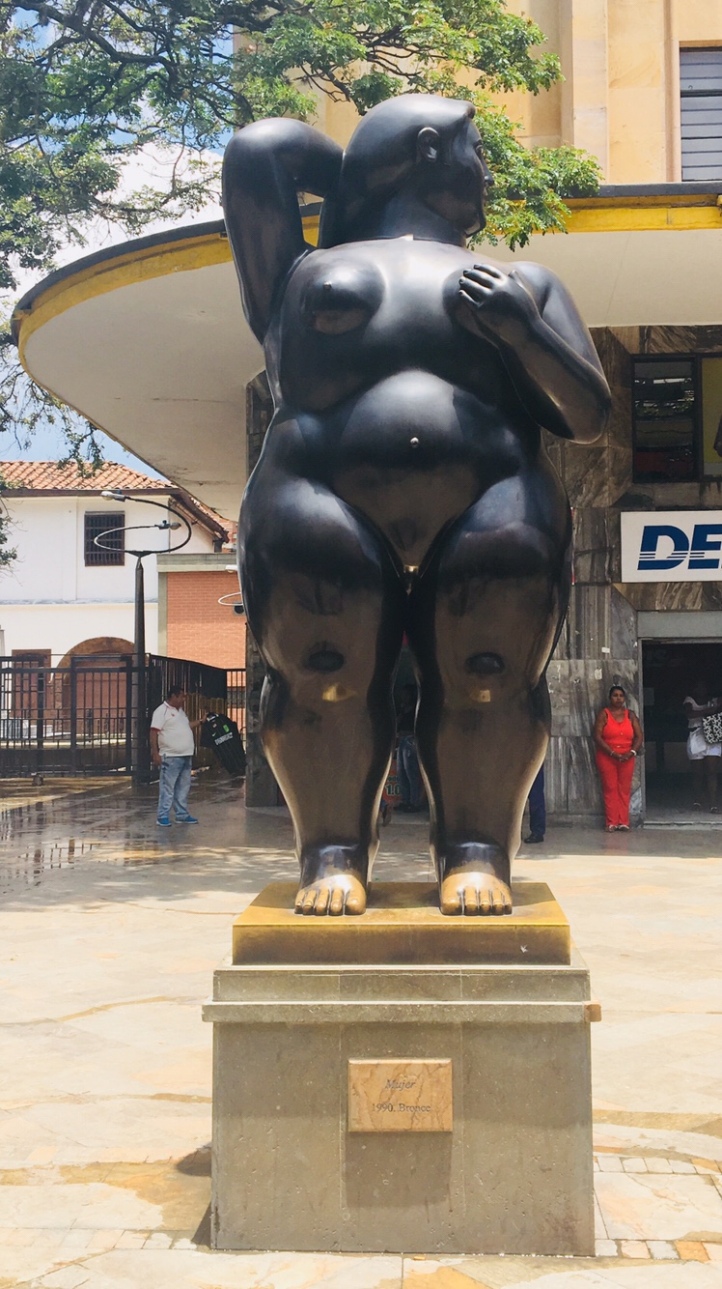 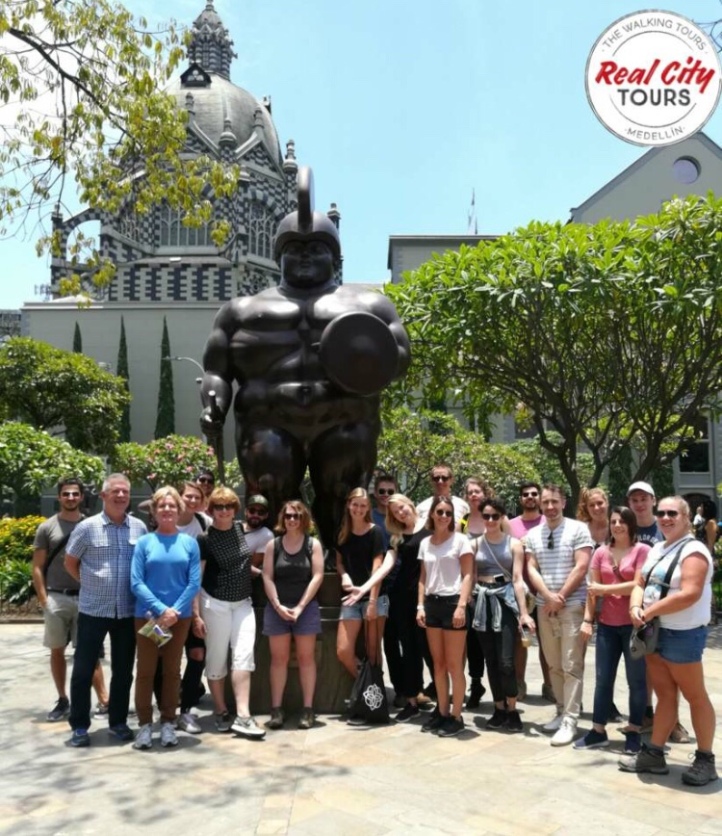 2 sold for $2.9 million and he donated his sculptures to the area to have it improved.

Overlooking this park is Uribe’s Palace of Culture by Belgian architect Goovaerts, notable for its gothic style. 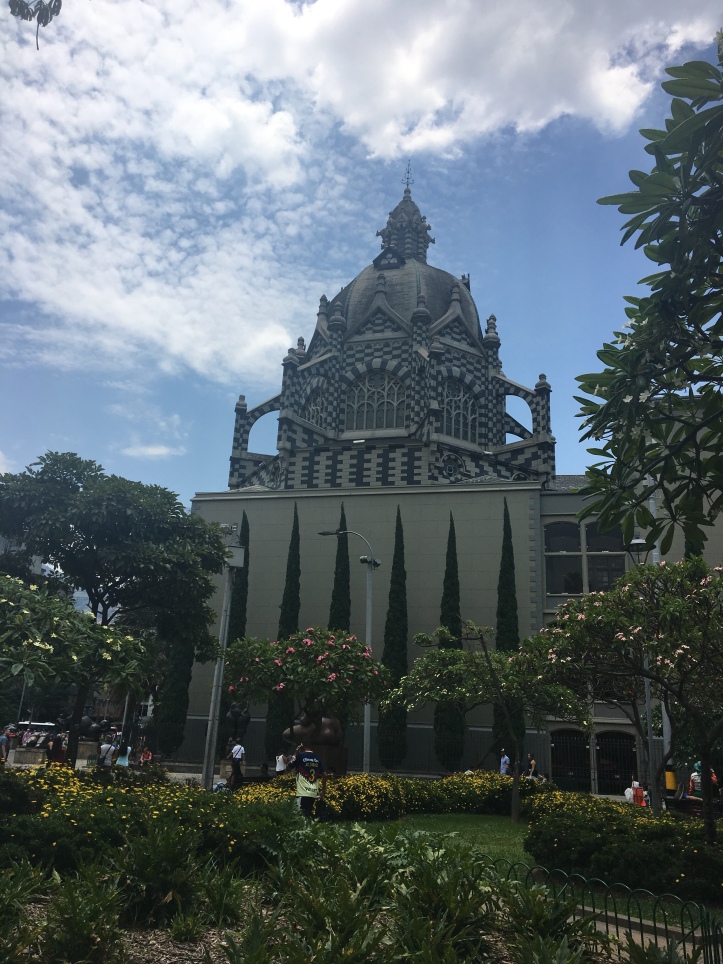 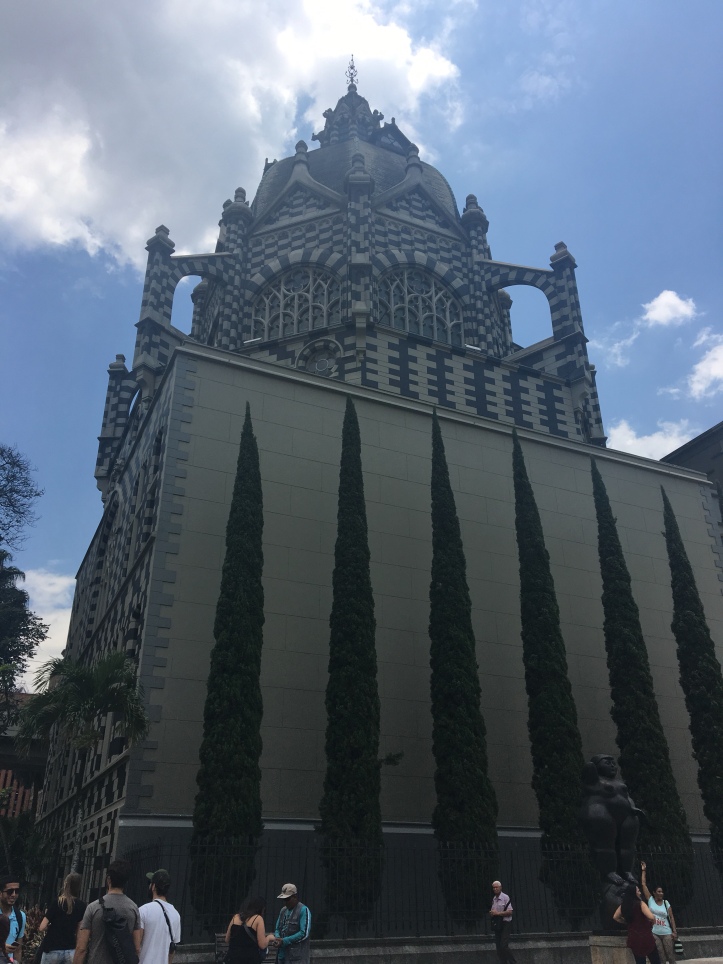 Berrio Park is a great place to visit and people watch. From lunchtime onwards, local guys start singing and playing their guitars. 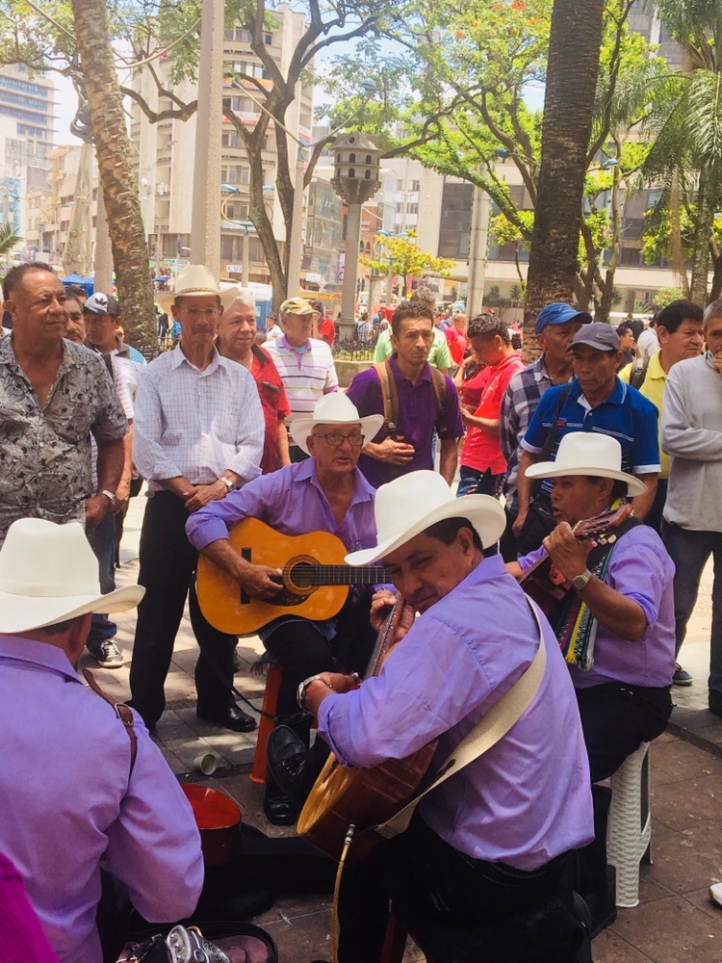 People sit and drink and just watch the world go by. Later on, people just get up and start dancing salsa. These aren’t buskers or beggars, just a place where people go to enjoy themselves, music and dance.

It’s then in to Bolivia Square. It seems every city in Colombia has one in honour of the liberator of the country. This park houses the Metropolitan Cathedral. 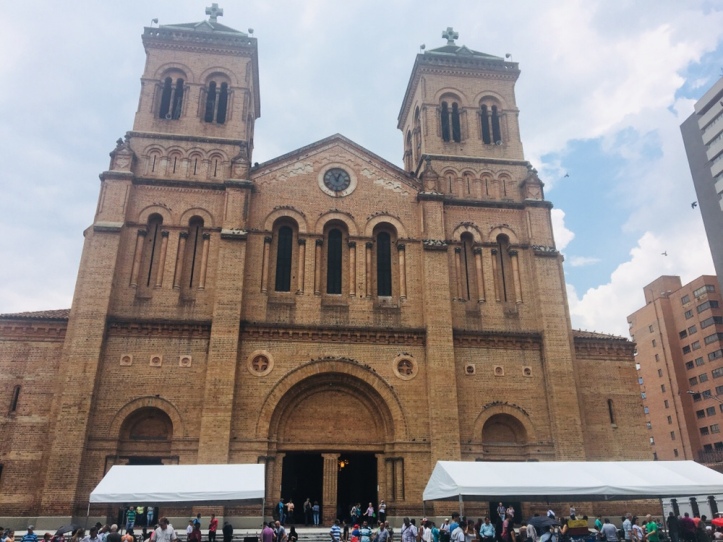 This park is also a hotspot for a bit of shopping on the products the country is notoriously famous for….a police station is now stationed there and dealers are supposedly being dealt with.

There is also an artisan market here on the first Saturday of the month and they sell some lively jewellery.

Our last stop is to Plaza San Antonio. We are warned to be careful here and all the tienda stalls are shut up. I ask why and am told because people stopped coming because it was deemed too dangerous. Our reason for visiting thou is to see the sad state of one of Botero’s sculptures. During a concert here in 1995, a bomb planted in a bird sculpture went off killing 23 people. 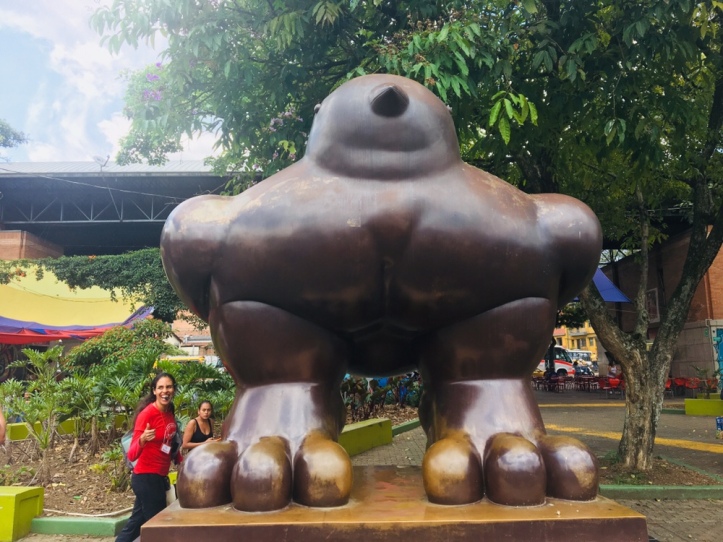 The mayor wanted remains of the sculpture removed but Botero rang him directly and opposed this saying it needed to stay in order to remember those who were killed. He then made an identical sculpture that stands next to it and they are called Pájaros de Paz – the Birds of Peace.

We tip our guide (between 20-35,000 is the rate required) and I do a bit more walking before heading back to El Poblado and sussing out this area further.

I then go to the salsa school I found online and enrol for when I’m back from the Pacific Coast.

Another quiet night in the cards…am too old for all this partying!