Early start today as I set off on a mini adventure to the La Guajira desert. Final destination tomorrow to be the most northern point in all South America – Punta Gallinas with tonight spent in Cabo de la Vela. It would be impossible to do it all in one day – especially doing it yourself which I’ve decided to do.

First bus, from Rodadero to the bus depot in Santa Marta 1600cop. Look for the colectivo that has a sign saying transporte ucc and get off there (it’s a big busy road) and cross to the terminal. Allow enough time to get here as it can take around 45 minutes.

Second bus is with Brasilia Expreso to Riohacha. If u booked ur ticket online, u still need to queue at their desk to get a different ticket – allow more time as they’re not that speedy.

I was told to be at the stand 5 mins before departure, which I was only to see my bus just about to pull out. I waved at the driver and jumped on who was muttering away about rápido, venga etc etc

I’m all for promptness and being on time but u were leaving 5 mind early dude so don’t twit me!

Anyways, I’m on and can sit back for 2 or so hours in a rather comfy seat with power point and some crappy tv!

After about 2 hours 40 mins, I arrive at the bus station in Riohacha. I speak to some people unsure whether to stay on to 4 vías (as I think it goes there) or get off and get a colectivo. I go to speak to the driver but he’s gone – I think Riohacha might be a main stop with long wait before heading on elsewhere maybe…

I see a police or security man, tell him I want to get to Uribia so what do I need to do. He calls over some bloke who says he will get me a colectivo….great!

I return from the loo and can’t find said bloke. Mr police/security helps me again and I locate the other man who tells me to be out the front of the station in 15 mins which I do but again can’t find him. I therefore ask someone in a bus logo’d shirt and he tries to locate me a colectivo. After wasting more than 30 mins here I just ask for the street where the colectivos are as that wd be far easier than waiting around.

Basically, u come out of the station and turn right and head that way for a few blocks until you see a small park in the central reservation and take a left there. This is a fairly busy street.

I’ve hooked up with some Colombians also looking for ‘colectivo st’ but are going elsewhere. A guy approaches us saying Uribia, Uribia…as that’s where I’m off I bid adiós to the guys and follow this dude a few metres. I wait there until my ride turns up. It was a clapped out geeen car with blacked out windows n they tell me to jump in – not a cat in hells chance and tell them I’ll get another one. I think they saw the fear in my face and opened the door to show me another European gringo in the car going the same place as me. Relieved, I jump in. We then drive back to where Tom from the Netherlands had started as they won’t leave until the car is full. It did seem these were operating off the main drag so there weren’t many people looking for a ride. Finally, 30 mins later a local man gets in and we’re off! It does seem they are missing a trick not loitering near the bus terminal but maybe they’re not allowed…

This journey should have cost 15000cop but I somehow got charged 17000 – I argued but they won’t relent and it was only 50p so I let it go. I have another leg to go after this and just want to get there!

It took about an hour or so to get to Uribia but we did have a bad ass fast driver – time is money to these guys I guess!

The bit of Uribia I saw is a hub of activity with little shops and stalls, jeeps and 4x4s being loaded up with goods to take into Cabo de la Vela – being on the border with Venezuela, there’s a lot of Venezuelan contraband….food, beer, petrol….even cars!

I had read that we would travel in a truck loaded with people and produce but we were loaded into a 6 seater 4×4 instead and for 20000cop we were off to tonight’s destination.

This journey took about an hour and 15 mins. Once u come off the main road there is no road, just desert. 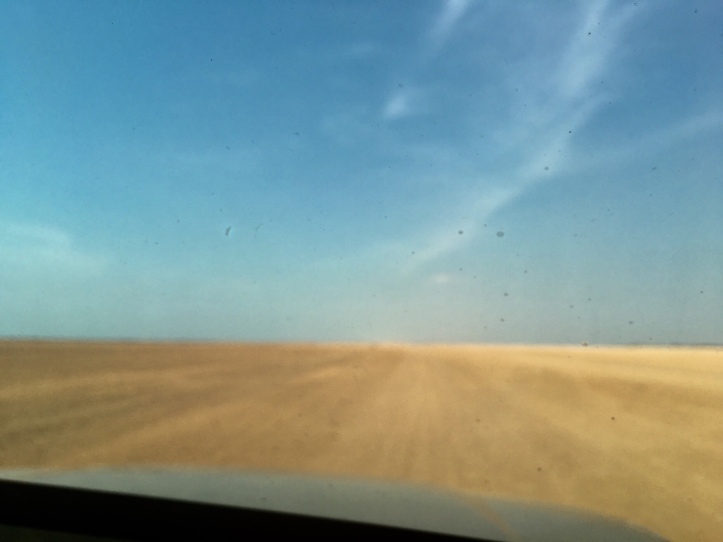 I felt at times I might see Walt, Jesse and their smoking trailer surrounded by loads of cacti!

We only made one drop off of contraband to a tiny little community and were then dropped off at a hostel. The drivers tend to take u to one but ur free to wander around and take a look at any others. Pleased with where we’d been dropped, we all opted for a large hammock on the beach front for 15000cop. 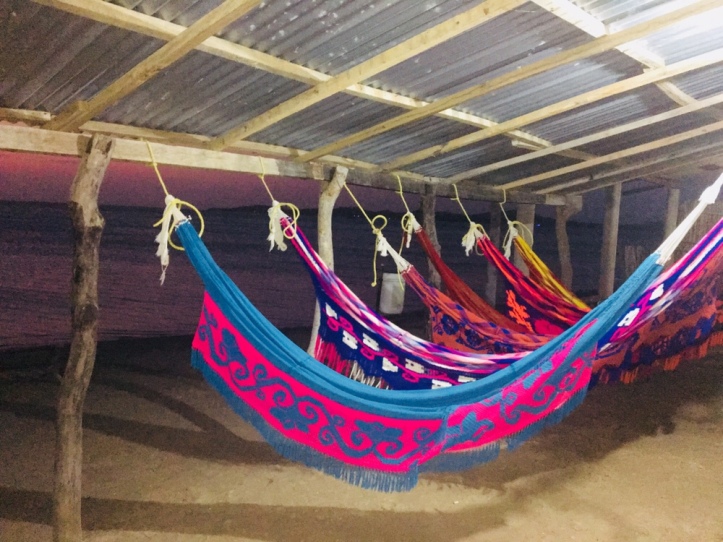 The hostel was a shack on the beach and extremely basic. As Cabo has no running water, u have to take a bucket of water with u from the collection well to flush the loo and another to have a wash!

We are told there is a ‘secure’ room to put our stuff in which they lock by feeding a chain throu the bamboo vines! Very much back to basics here but it’s kinda nice. 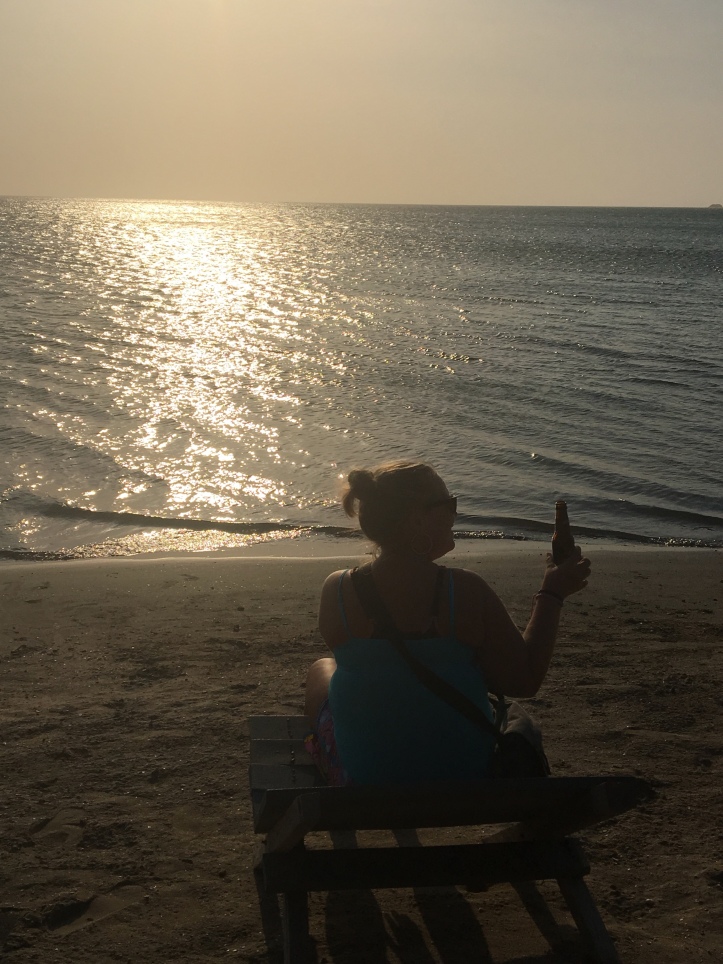 To simplify things, the driver that will pick us up from Punta Gallinas in 2 days time can take straight back to Uribia rather than going back to Cabo so we decide to do this. 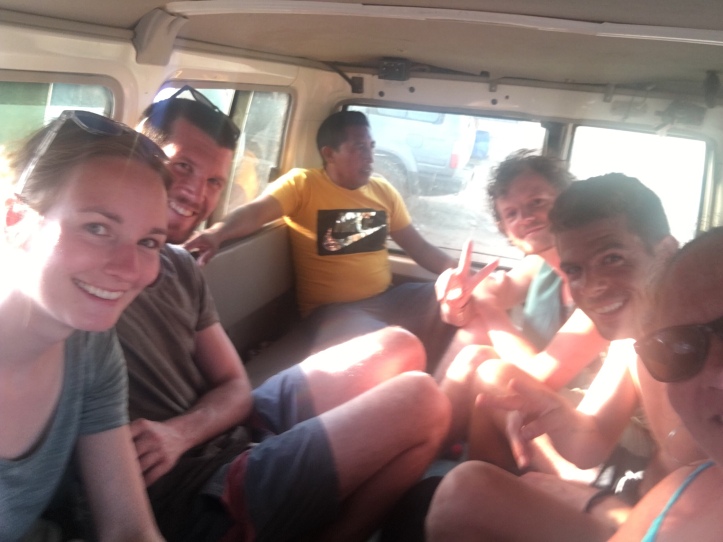 We went to Ojo del Agua beach and then on to the lighthouse Mirador point for sunset. We miss another beach but the main draw of coming here is really to go to Punta Gallinas and I have been at the beach for nearly 2 weeks!

Ojo del Agua was beautiful and it wd have been nice to chill here if time allowed. 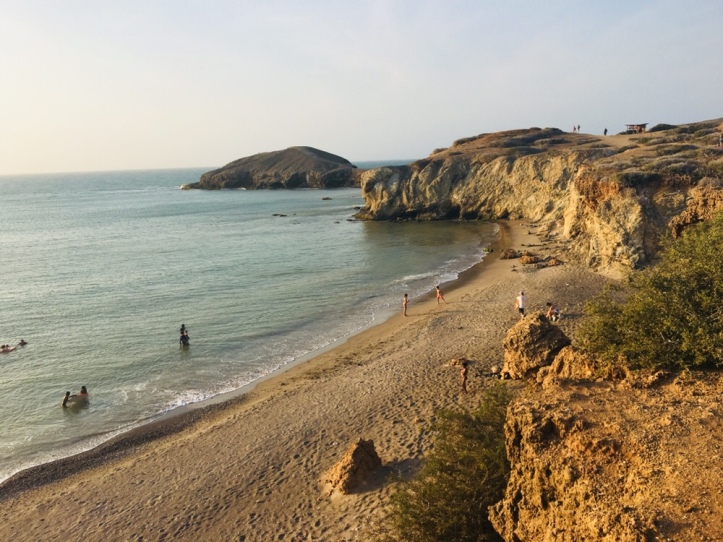 The walk up to the viewpoint was a bit of a struggle with my toe but more because I’d changed to flip flops. The view and a unset was again stunning thou. 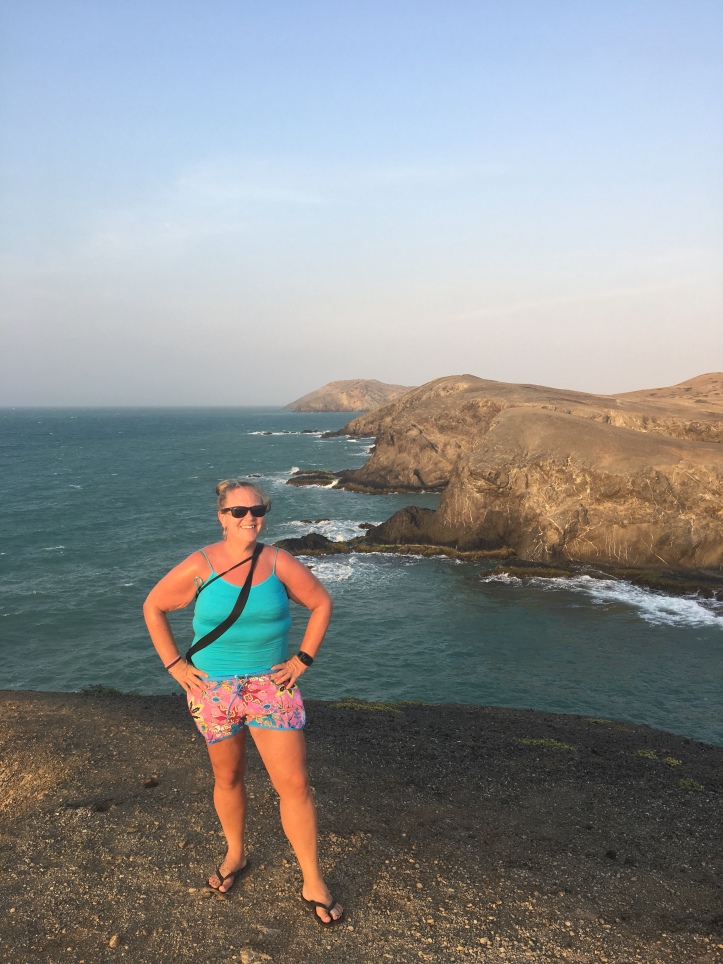 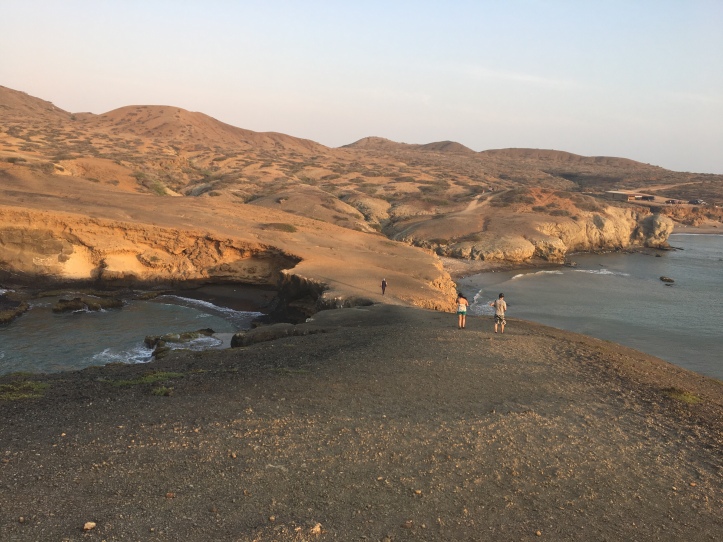 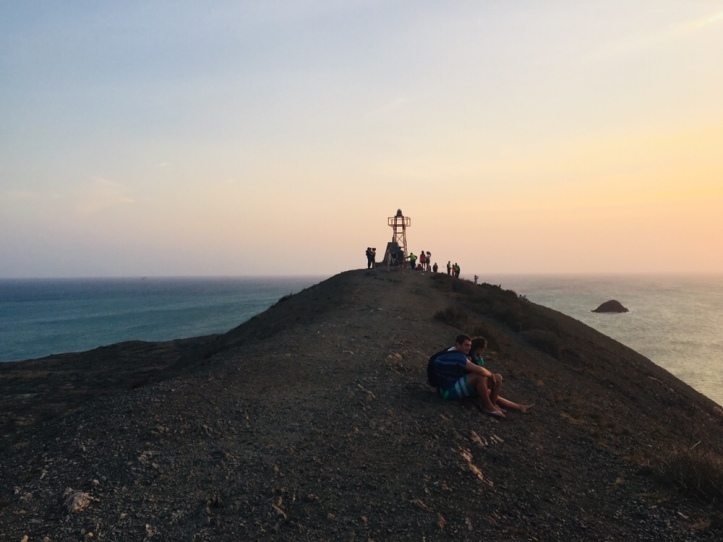 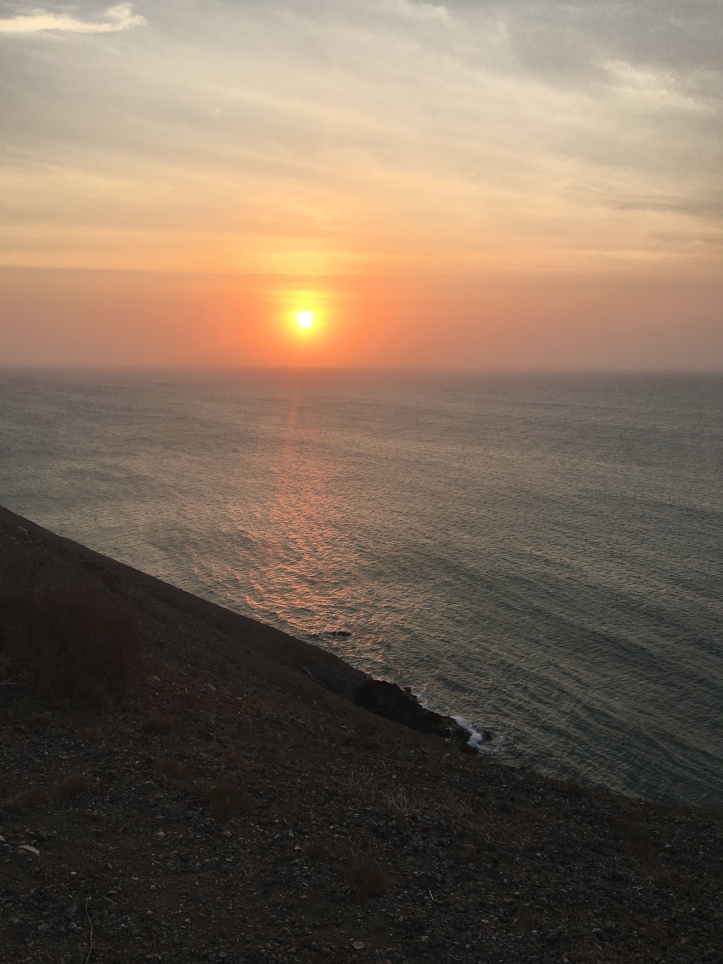 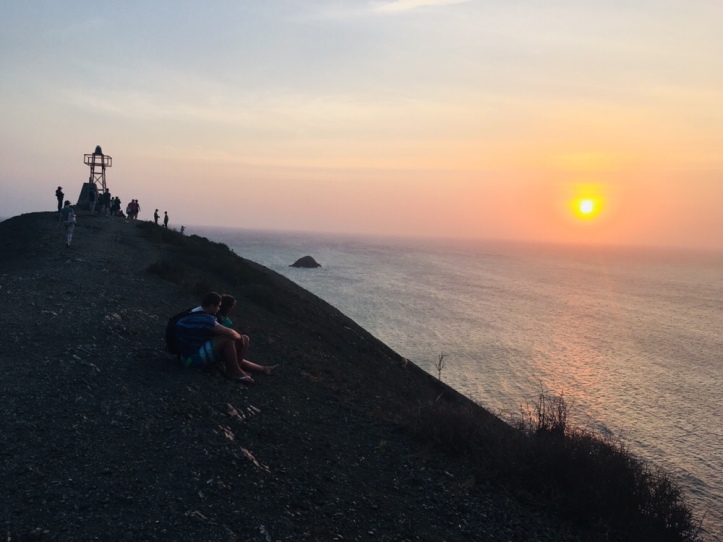 Cabo de la Vela is a huge spot of kite surfing but I had no signal to message someone from work…Julian, if ur reading this – Cabo is a place u shd definitely check out!

Cabo de la Vela is more than beaches, kite surfing and a stop off to Punta Gallinas…it is home to the indigenous Wayuu people and is a very sacred place to them. They believe it is the resting place of souls with their ancestors after death, in the gate to the afterlife. Always be respectful in front of these people in this sacred place.

Being on the border with Venezuela, the Wayuu people are free to roam between the 2 countries without constraint and live as they always have done.

Once back we try to decide where to go for dinner….all the menu choices I’d read are pretty much the same up here but we realised on the drive back that our hostel is a fair bit away from the ‘main drag’. Deciding to take a quick rekkie of what’s near us rather than just eat in the hostel, we choose somewhere that has some other foreigners in. Chicken, fish or lobster with rice are order of the day here – guess what I had!!!

We hear some music and head there instead of back – it’s still only half 8 despite feeling much later, so we all go for a drink and a natter. Fritz and I are shattered so head back to see what kind of nights sleep awaits us in our hammocks!!!

I was told by hostel staff that there are no mozzies here but I brought my long pj’s (not taking any chances) and incase it gets cold. Brush teeth by torchlight, change and hammock. They’re more comfortable than u think but the wind was blowing a bit and the noises around u take a while to adjust to. Once the others got back and silence resumed, I nodded off….