Wake up feeling loads better and decide it’s time to move on. I’ve booked myself a different hostel and about 1000 move on to see what La Candelaria is all about – but in the day time of course!

I decide to risk getting an Uber – not having much cash on me, I’d rather risk it and it just be charged to my account. I have a very friendly driver who tells me to sit in the front so he doesn’t look like an Uber driver! Guess they’re really not allowed over here them! I get asked again if I’m on my own/single…estas soltera siempre! I’ve now started lying saying my fella will be joining me in a few days! That shuts down that conversation!

Pull up at new hostel and it’s a bustling little place. Too early to check in so leave my bags and venture off into this big bad city! First port of call – mobile phone shop! Wasn’t as easy to find one as in Central American countries but stumble across a small Claro shop. What an absolute shambles of a store! And without going into it all – spend an hour or more traipsing between 3 different stores to get my SIM working. Working for a mobile company and learning business Spanish helped me no end in discussing and arguing with the lame excuses coming my way and I finally get them to sort out my data connectivity. Then I realise the package I bought isn’t right so need to go back tomorrow! Bunch of cowboys.

I’ve signed up to do the Graffiti Walking Tour. This is free of charge but they do ask for about 20000 COP in donations and takes about 2 hours. It’s hard to come to Bogotá and not see or realise the importance of graffiti here – it’s everywhere.

We meet at Parque de los Periodistas for 2pm (there is one at 10am too). As it’s free, u do get quite a lot of people but it’s nice chatting to people from all over.

Our guide Carlos wears this little ear piece speaker thing which is a great device to enable everyone to hear him, especially over the city noise. At 1410 we set off and one of the first pieces we see is by Miami graffiti artist Hox. He presses the can against the wall to get a splurge of paint that creates these tunnel effect things….pretty cool 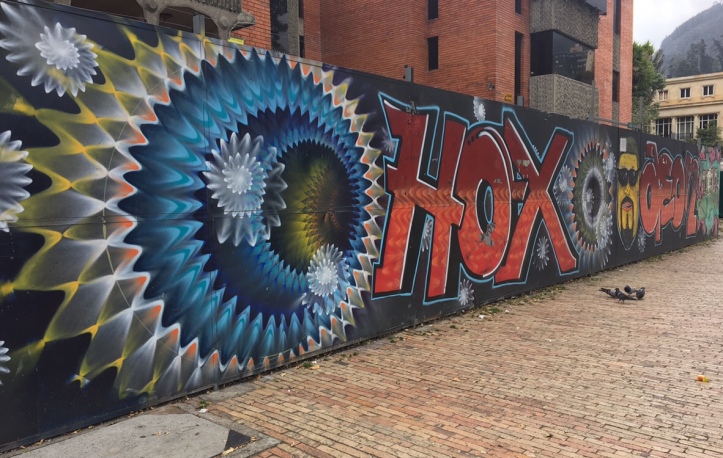 Juega siempre or DJ Lu is all over the city and is quite easy to spot – more by his style and stencilling and political stance – hand-grenade pineapples being one, and bugs with guns as legs!

The story behind this guy is quite sad 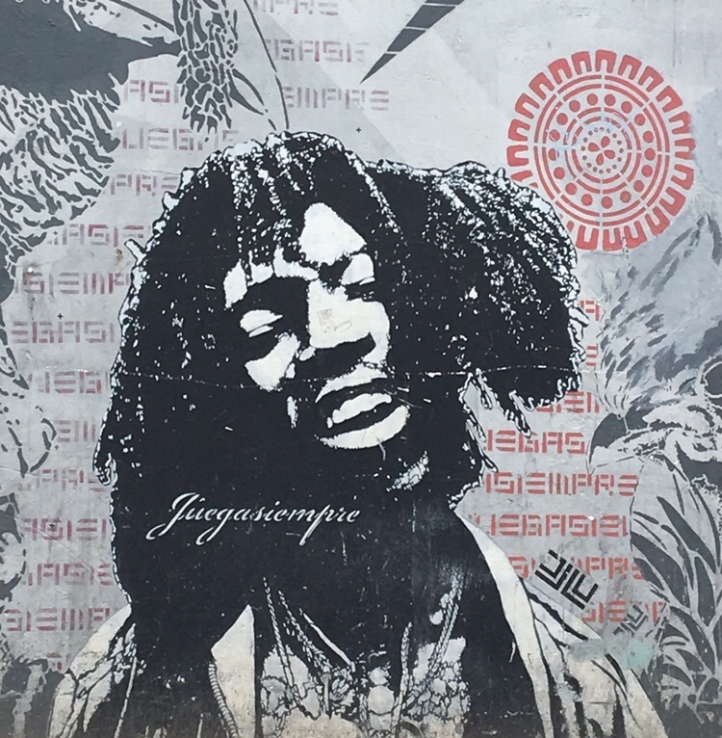 He was just a local indigenous guy. The army got money and promotions for killing guerrilla/mafia types. When they had almost all been caught, the money and the promotions halted….so they went about killing these innocent poor people, dressed in them in guerrilla clothing and took them to the authorities to get their “rewards”. It is said that over 6000 indigenous people were killed in this way…. 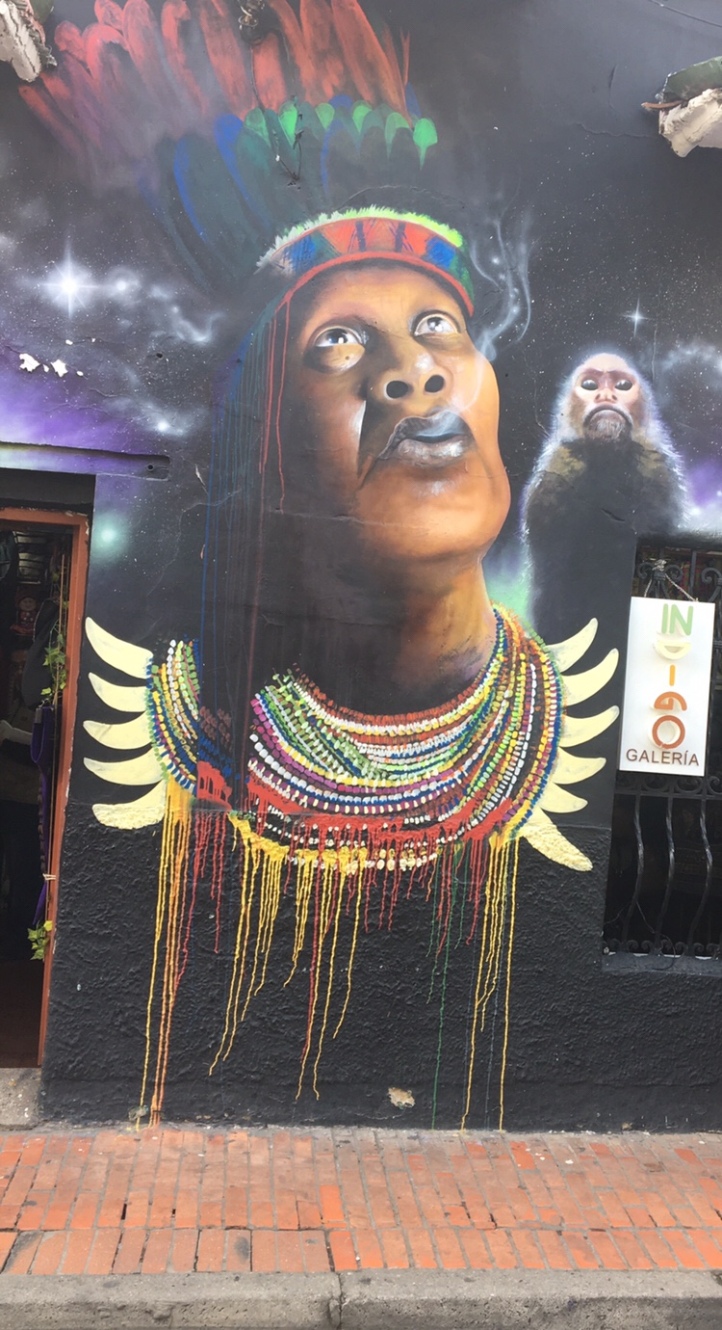 The below was done by a woman with brushes in an extendable pole and a one tier scaffolding. Attention to detail is phenomenal and u can see a likeness to the work of Van Gough 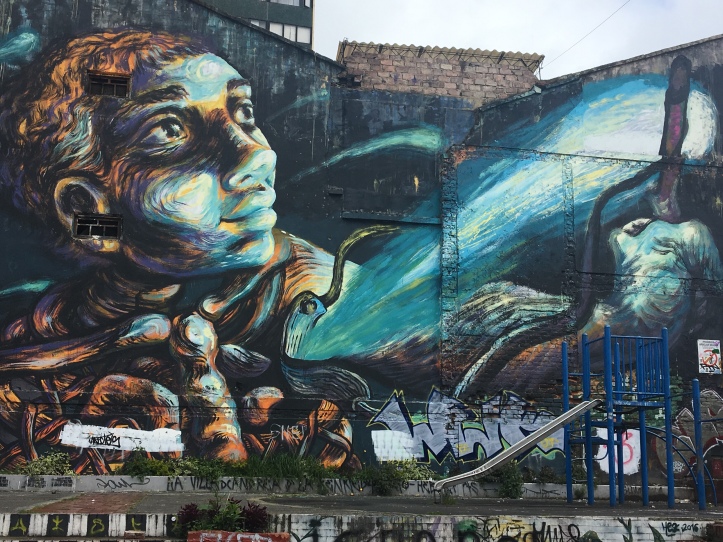 Stink Fish is another famous artist – work usually recognised by psychedelic colour around a yellow face. It is rumoured he has done a piece in Bristol but I’m not sure….

This wall is amazing but I can’t remember the artist. I believe it was painstakingly done on a kind of paint by numbers basis….the effect none the less is awesome

A lot of political strife and corruption has caused a surge in graffiti in Bogotá. Not just the above but the innocent killing of 16 yr old Diego Felipe Becerra in 2011 who was shot in the back by a cop whilst spraying a Felix the Cat then they paid a bus driver and planted a gun to make it look like he was attempting to rob the bus! This caused a massive uproar and surge in graffiti in the city.

One of the last big things that caused uproar in the graffiti world was when Justin Bieber came do to a gig and on the very busy El Dorado, shut off in rush hour and supported by however many hundred police and film crews, did his own bit of lame graffiti. It wasn’t the fact that his work was crap but the fact that the police endorsed this when only 5 or so years earlier had shot Diego Felipe.

Due to the backlash from artists over all this, the city mayor who is opposed to street art Gustavo Petro, changed his attitude and actively promoted graffiti, even willing to give materials to street artists to carry out their work. This caused mixed feelings as some artists believe that the fun is in doing it when it isn’t allowed but some places have benefited well from these projects like this park (who were only commissioned to do 2 walls but ended up doing the whole thing). I believe it took 2 months to complete…

Owners of buildings would much rather have nice graffiti art in their walls than the tagging that just makes a place look run down and rough. This is a section of another project that 2 artists completed in a week

Seeing a whole area like this does make you think and certain assumptions spring to mind then I remember the city I’ve lived in for so long – the home of Banksy and also love and lived in Southville that is now also adjourned with graffiti art and isn’t rough at all – and is actually one of the most expensive places to live!

Carlos our guide was amazing. Took us to some great places and explained everything extremely well – so much so, I’ve been able to recapture a lot in this post.

It’s a great way to see and understand the city. It also made it feel a lot less intimidating and daunting of a place. I’d definitely recommend this tour to anyone on a visit to Bogotá

I ventured back taking in some streets and sights, confidence now increased of walking around this city. I grab me some street food for dinner – my first empanadas for only £1 and the best creme brûlée ever also only £1. I can’t comment on the coffee as I don’t like it!

Dusk is setting in, and listening to everything I’ve read and the advice of today’s guide….I head back to my hostel for around 1900 like I’ve been told to! No point risking it and I’ve a busy day planned tomorrow.

Had to change to another hostel on getting back as a mix up on my booking but do end up at a much nicer one with better room. Sit and chat to some people in the social areas which is nice. Ulucaho is a lovely hostel if ur looking for somewhere to stay and is central to everything