Chichicastenango & A Night Out in Pana – Day 18

Up and out again this morning and grab breakfast to go as I set off to Chichi – one of the biggest markets in Guatemala.

I wander round the bountiful, colourful labyrinth of streets of vendors selling all sorts of artisan crafts and wares 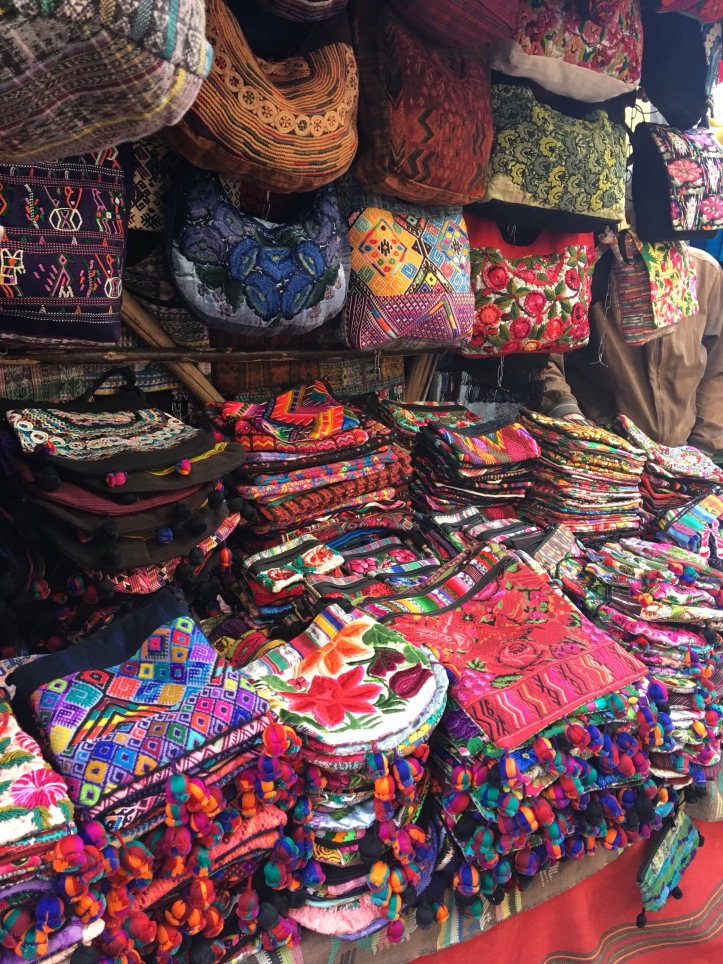 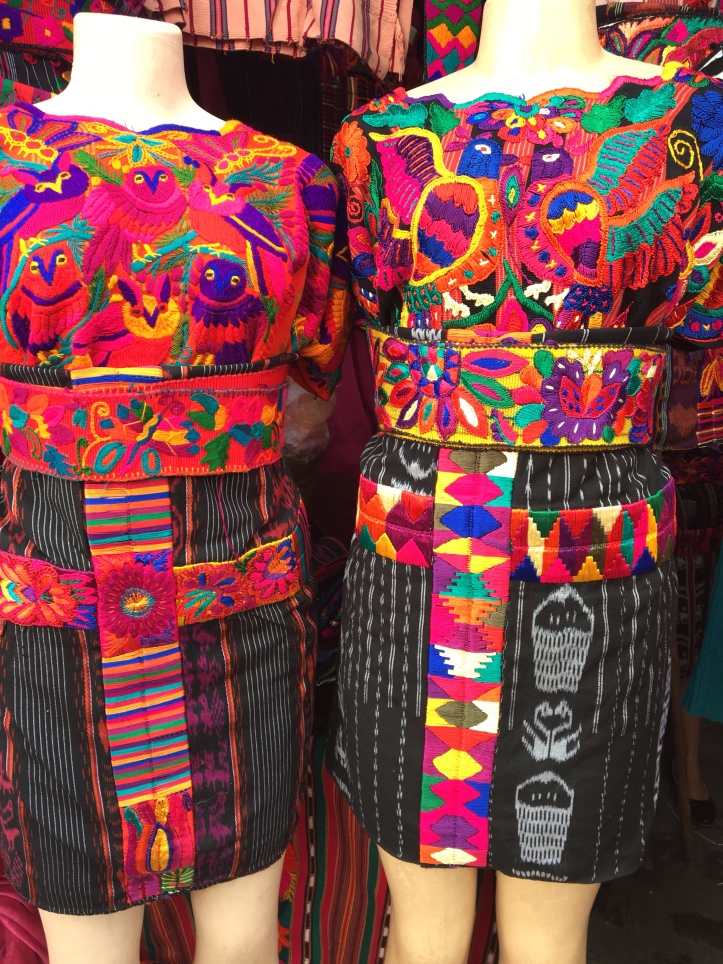 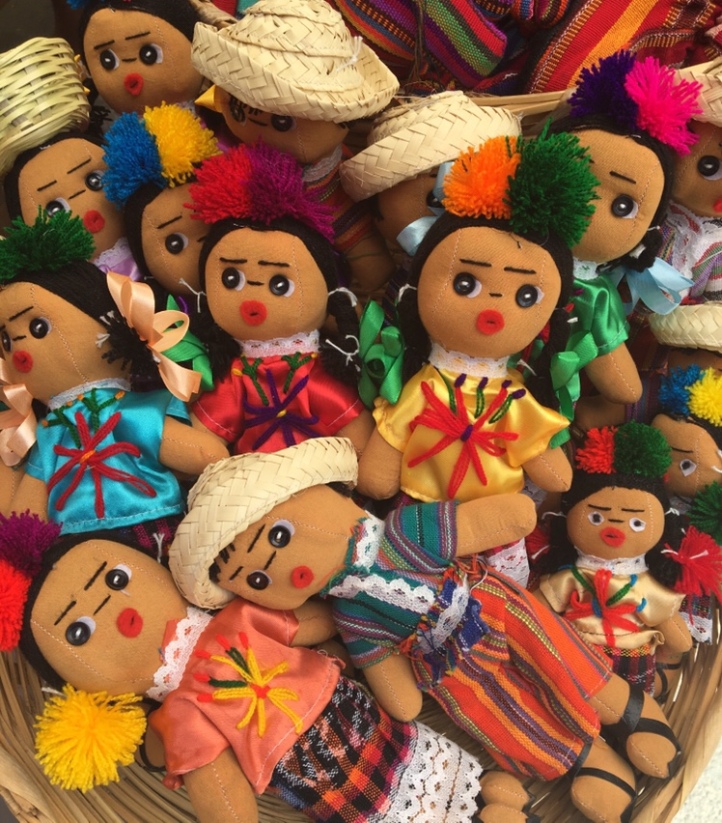 After taking a fair few photos realise I can’t spend 4 hours looking at all this stuff so take a break in a pretty cool cafe, order a cuppa and catch up with a few people at home.

Wander round a bit more and buy some lovely fresh fruit from a stall….all this for £1! 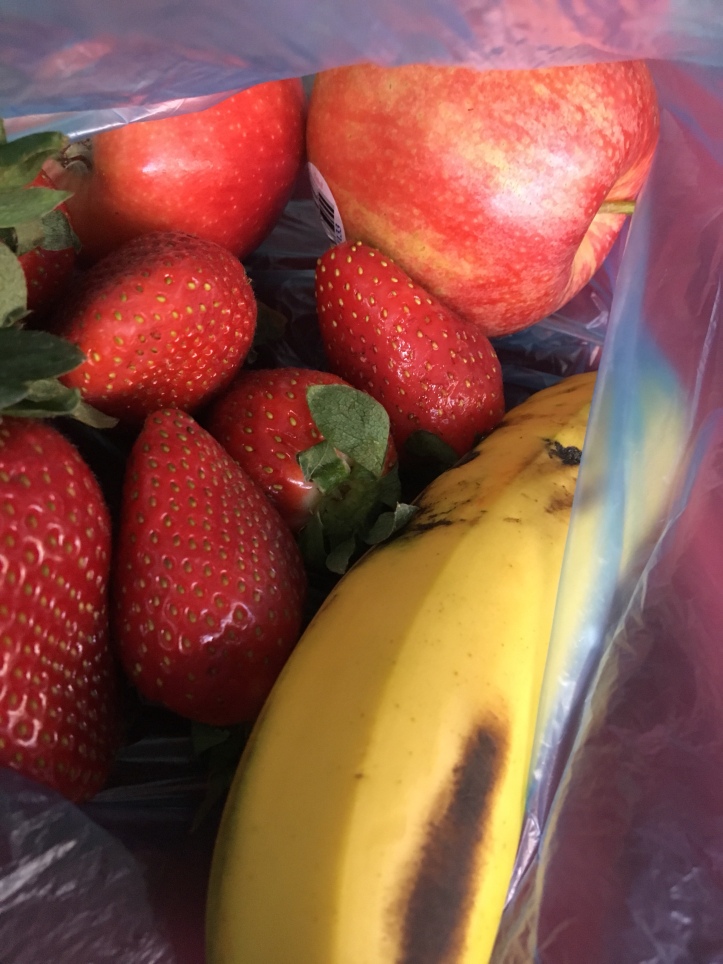 I need to do this more often else will start to look like a cheesey dorito or cheetohs!

I’m glad I went to say I’ve been but wouldn’t necessarily rush back there. It’s great if u like all that kind of stuff but it’s not really for me. Transfer costs £9 which isn’t too bad and is a faster bus in and out. U could go by chicken bus for a third of the cost but it does take longer and u do need to change I was told…. 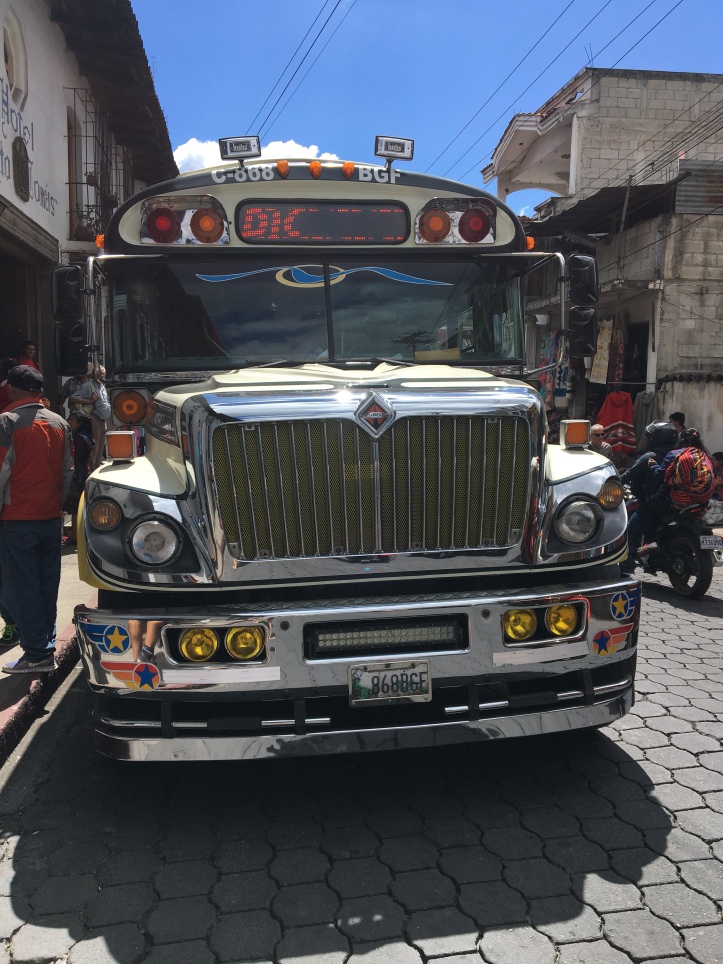 Back to the hotel and it’s a fab place to sit around talking to people on the patio…..could definitely stay longer at this place. The owner Carlos is great – friendly, chatty and makes u feel at home. Gerson the other guy working here is really nice too. The banter here is great as we joke, laugh and take the piss!

Decide I can’t sit around chatting all evening so go take a wander n find a bite to eat n see if this place has much life of an evening…..

Go see the sunset over the lake 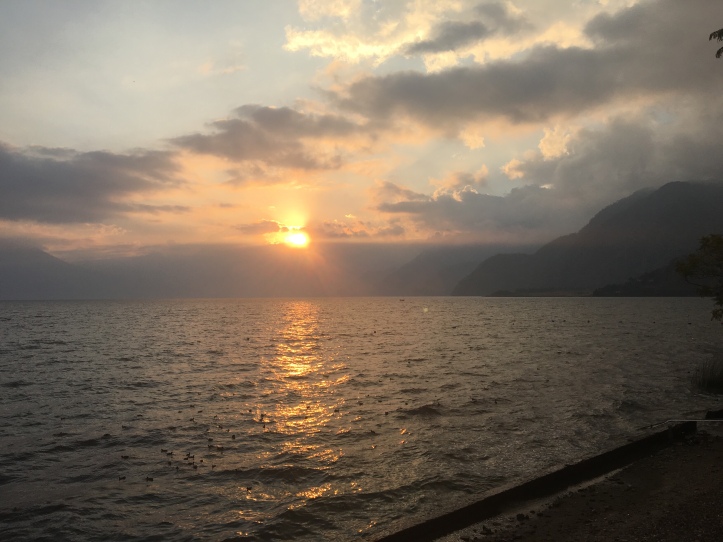 then head to a restaurant I’d read about online – Guajimbos. Decided to treat myself to a bottle of wine – which was not only more than my rooms per night but also double the cost of my meal! Still it was bloody good to have wine with dinner rather than beer!

The meals here might be more than ur average restaurant 80Q and up but by god their portions are bloody massive…Good job I only had fruit for lunch!

Was a great place to sit and people watch until a table of 22 American teens rocked up on a school outing. That’s the thing with these kinds of restaurants – they attract the big tour groups n wot not. Wonder if they’ll let me do take out with the rest of my wine!

They do and finish my wine back at the hotel sat on the patio helping Carlos with his business ideas and giving him my expert opinion! Despite the wine I think I made some pretty sound suggestions 😉

José gets back to me of somewhere to go – a bar his friend works in. Deciding it would be rude not to, off I go to find Silvia and T’zikiss bar. Silvia is lovely – pissed as a fart and mad as a box of frogs but she’s dead chuffed José sent me up. 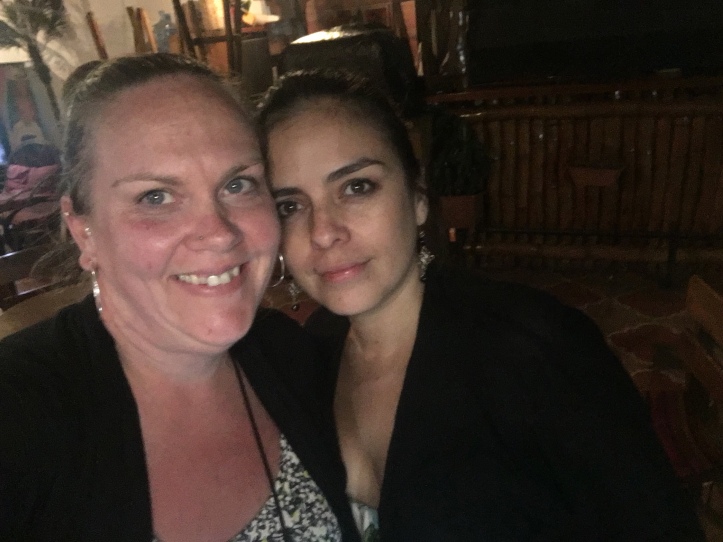 Pablo the owner is also pretty cool along with Rudolf who’s sat there managing the tunes.

I am invited by these 3 to join them with a shot of tequila….por que no hey!!! 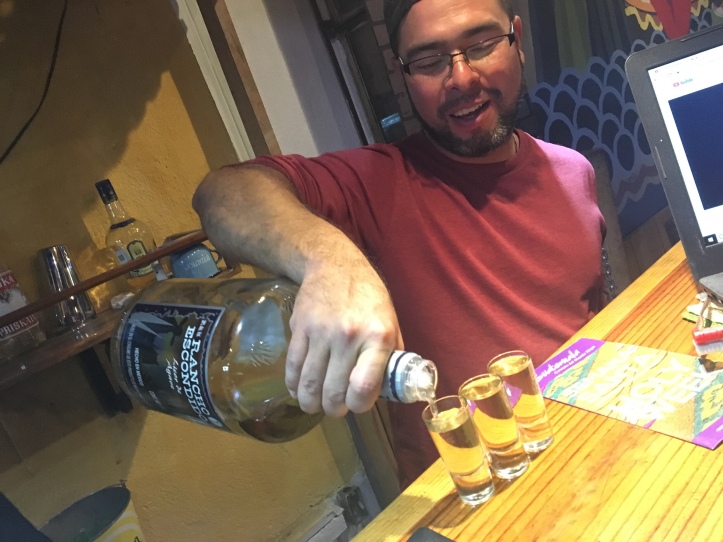 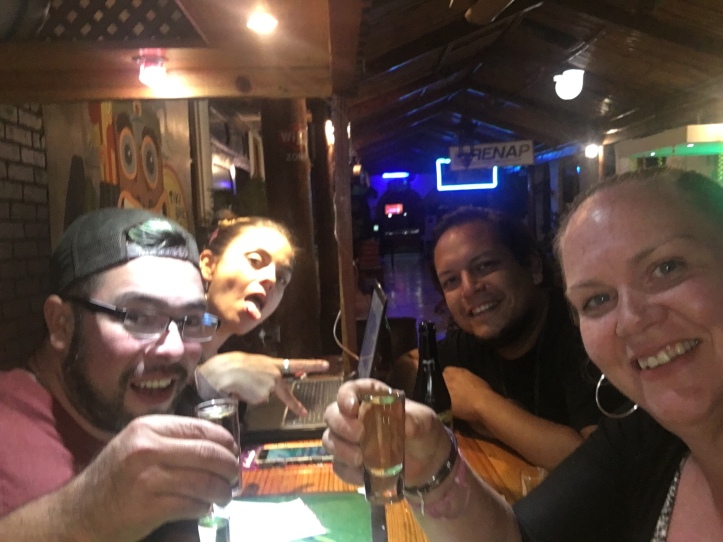 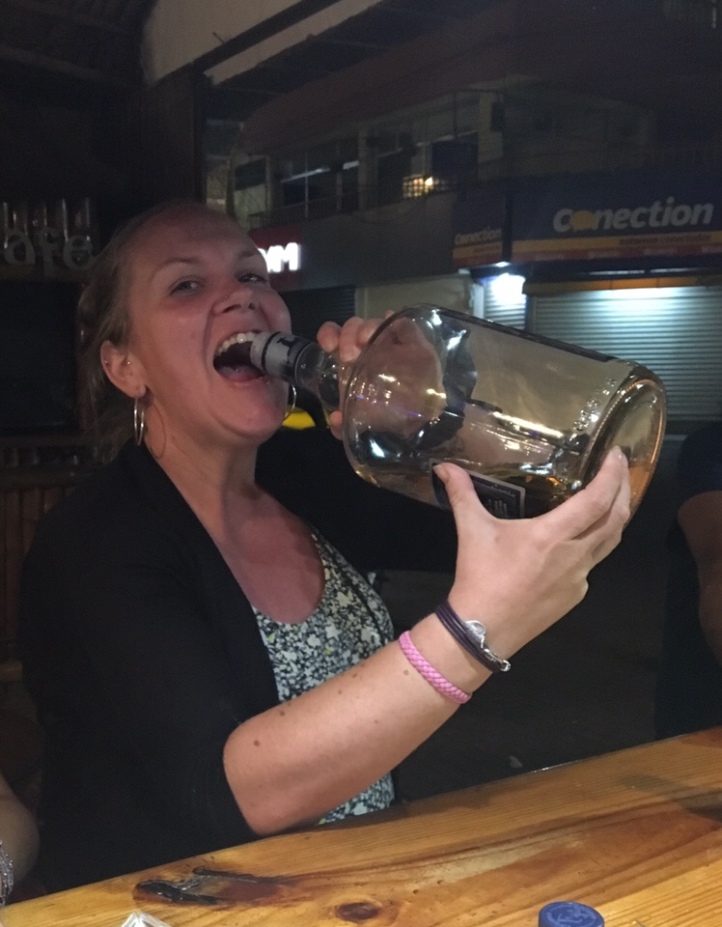 There are definitely some ‘interesting ‘ characters that come in and out of this joint including one who was bat shit crazy that disappeared for periods of time in a tuk tuk with different guys then as far as I could tell came back in ranting about them!

Several beers and tequilas later, I get back just after half midnight to find the main door to hotel locked (idea for Carlos here – give guests keys to front door)! Procedure is to ring one of 2 numbers….bollocks – my phone doesn’t work here for some reason and I can’t make any calls!!!

How the fuck do I wake Carlos or Gerson without waking the entire complex! Cue some quiet knocking and loud whispering when Gerson comes to my rescue and lets me in….rather pissed, I head to bed!