Jet lag kicking in, I awoke at 0330 and with accommodation on my mind, changed my bed in a dorm room to that of a double on my own – just can’t face it, need personal space! Being up so early, I was ready to go for a run by sunrise and back to watch the rugby by 8…morning topped off perfectly by a Wales win 🏴󠁧󠁢󠁷󠁬󠁳󠁿😃

It was then time to say goodbye to my fabulous hosts as they go away for the BH w/e – thank you very much Chris and Kalinka for putting me up. I had a blast of a few days with u. Don’t forgot to shout if ur anywhere on my route at all.

Left to my own devices, I set off to somewhere I’ve always wanted to go….Xochimilco.

Once the metro came up to overground, I had definitely left the Gucci, Tiffany laden, leafy suburb of Polanco behind

and was now in areas u more tend to think of and associate with DF.

It’s quite a journey as once off the end of metro Line 2, it’s on to the light train to Xochimilco (cost – approx 10 pesos for metro and 6 for train)

Then a 5-10 min walk to get to the embarcaderos (just follow blue signs).

Once at one of these, many a tout will come up to you offering u a trip down the canal on a trajinera (a bit like a gondola) for varying prices. The internet says there’s a price of about 450 pesos per boat and not per person but they were not having any of this! They also don’t like small groups of people joining together so try and meet people on the train or walking towards the boats beforehand.

I joined an American couple who had been quoted 900 for 40 mins and then 500 for an hour! When I joined them he put the price up but I haggled that wasn’t fair so in the end we all paid 250!

All aboard, off we set down the canal. Quiet at first but then we came across all the other colourful trajineras that make this place so famous; vendors selling beers, food, flowers, sombreros, mariachi bands playing. It was a pretty cool experience. 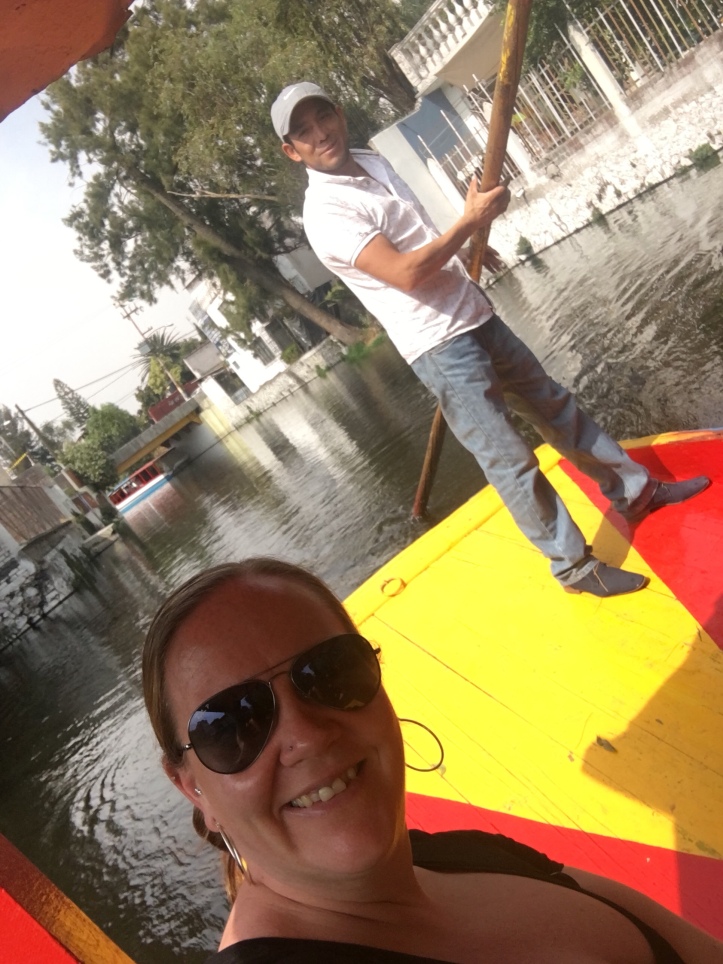 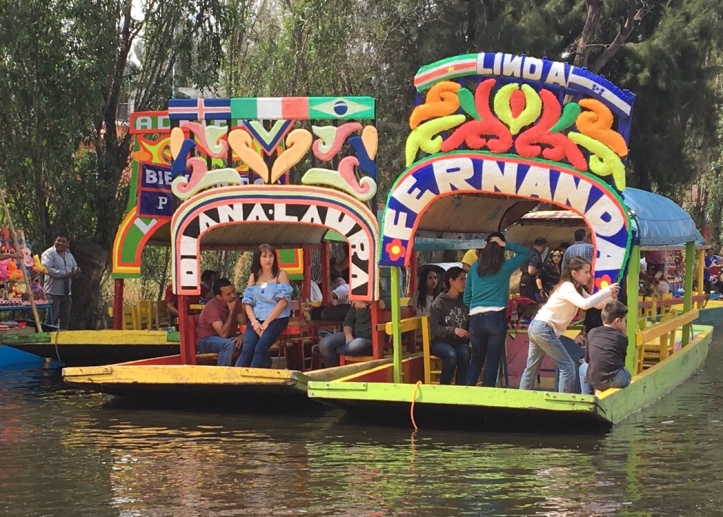 Tip – it would have been more fun to do with a large group of friends/family and have a party on board. But I enjoyed the hour I had and a nice cold beer.

On the way back, Oscar our captain, let us have a go with the pole – much more difficult than it looked…I cdnt even get the pole to touch the bottom to push off!

Back on dry land, I headed to a church I’d read about (San Bernardino de Siena Church – nothing note worthy tbh) and the neighbouring food market where I enjoyed some very tasty, very cheap chorizo tortillas (35p)!!! 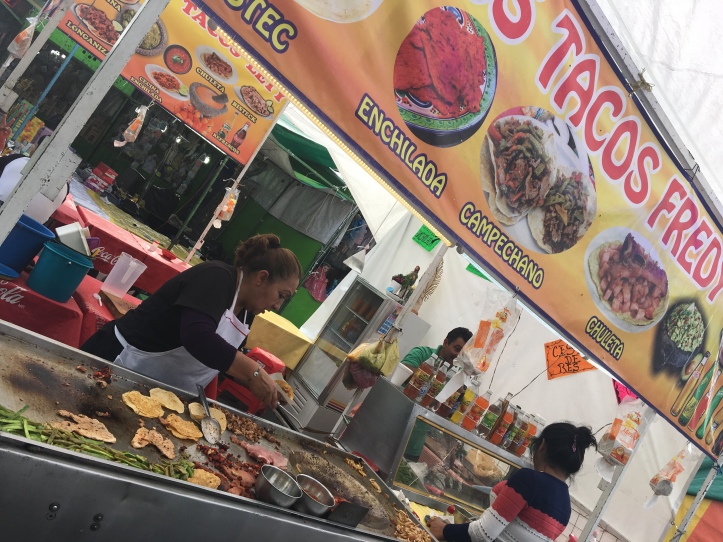 A lovely and busy day had, I decided to head back home, treating myself to an ice cream by the station ready to sit down for the next hour n half…..

Then comes my first encountered problem….there had been an accident on the line and the train service was suspended, they had no idea how long for and I am miles away from where I need to be….I cd get a taxi but this is Mexico City and traffic is a nightmare!

Panic not, I go and speak to a police man and a ticket tout but they gabble options and directions at me so fast I can barely keep up (I get lost after the first 2 in English!)

Then I find a woman who is heading in the same direction as me. She speaks far more slowly so that I understand and tells me to follow her. We pick up another 4 stranded people and away we go to find a little micro bus!

I have no idea where I am, where I’m heading but my new found friend is with me

so I sit back and enjoy the journey hoping I’m in safe hands and rock up at a metro station somewhere that I can work with.

We pass some big dilapidated buildings along the way – damage caused by the recent earthquake. My new friend Toña (that’s how I heard it and I like it as it’s one of my fave beers!) told me that this area felt it quite badly.

After an hour, Toña notions me to move and tells me we’re here and again to follow her. Walking throu another market place, we arrive at the metro station….only 1.5 hours after I’d originally wanted to leave but I didn’t care, I was just glad to be back at the metro stop I needed

Now time for long arse journey back to Polanco but who cares….at least I know where I am and am finally en route home!

Finally home (3.5 hours after I tried to leave), I kick back with a well earned beer and make a mental note to start taking sun cream out with me! Weather is improving ☀️😃☀️😃

Shattered after an early start and a full on day, I decide to do bugger all tonight and use my time to write this, watch a bit of tv and then bed as I’m on themove tomorrow!